Singer Rod Stewart has recorded a special message for a special fan from Yorkshire who recovered from coronavirus.

The veteran rocker congratulated disabled Ben McCafferty, 34, for fighting off the virus after hearing he was a big fan of his.

Ben, of Thornton, near Bradford hit the headlines earlier this month when he was applauded by police, medics and firefighters as he left Bradford Royal Infirmary.

He had been given just a 1 in 10 chance of survival, having previously been struck down by both meningitis and TB when he was just 13.

Rod tells Ben he wants to meet up with him in person and says: "I hear you are a big fan of mine - thank you my friend.

"Let me congratulate you on a wonderful fight that you have put up - tremendous mate.

"Also, the nurses and the doctors who looked after you, aren't they tremendous?

Ben's mum Diane described Rod's video as "fantastic" and added: "We are all Rod fans and saw him in Leeds last December.

"I have brainwashed my Ben a bit with his music! Ben loves him and I cannot thank Rod enough for his message and for everyone who made it happen."

ROD STEWART's wife Penny Lancaster gave fans a glimpse at their enormous garden online yesterday, as she posted footage of her husband and children playing football on a sizable football pitch and cricket in a batting enclosure.

Yesterday, the 49-year-old ITV star shared a video of her kids playing in their enormous garden with her 98,200 followers on her Instagram Stories.

In the clip, her youngest son enjoys a kickabout with 75-year-old Rod on what appears to be a full-size football pitch.

The youngster could be seen passing the ball to his father, who quickly returns the shot, and then shoots the ball into the back of the net.

Rod, who is a huge Celtics fan, was casually dressed for the family football game in a sleeveless white top and dark trousers.

Penny captioned the footage: "So lucky to have this pitch at home more than ever." 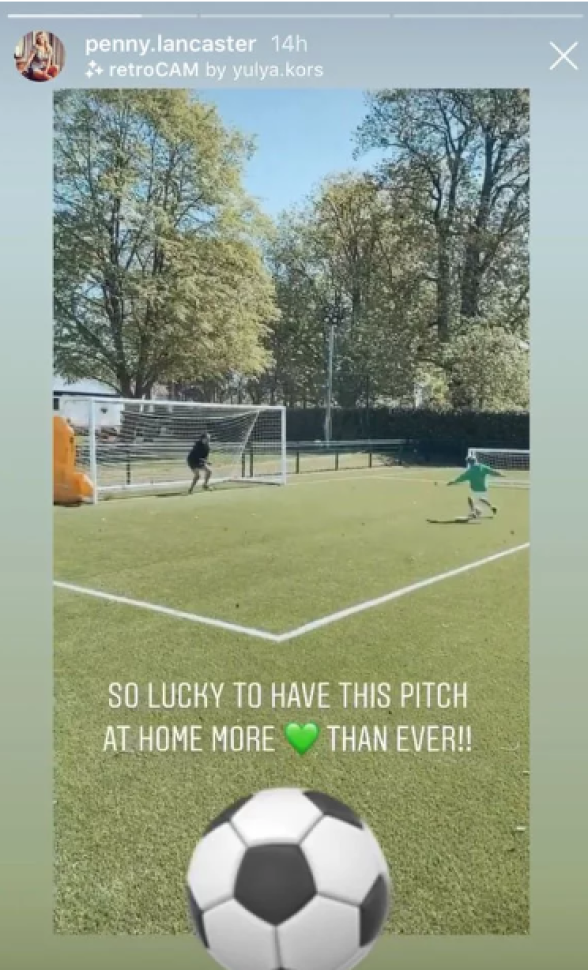 Rod Stewart, 75, takes advantage of sweltering temperatures as he hits the beach in a vibrant shirt and shorts combo during lockdown

Rod Stewart put his feet up on Wednesday morning after helping raise money for the beleaguered World Health Organisation - days before US President Donald Trump cut funding to the specialised agency.

The veteran star was in characteristically high spirits after paying a visit to deserted West Palm Beach in Florida as the US continues to follow strict guidelines regarding social distancing and self-isolation.

With temperatures soaring, Rod, 75, relaxed on a sun-lounger as he made the most of the usually busy coastal hotspot, a popular destination among tourists. Rest and relaxation: Rod Stewart put his feet up on Wednesday morning after helping raise money for the beleaguered World Health Organisation

The British star ensured he was hard to miss in a bold pink summer shirt and vibrant red shorts, teamed with matching trainers.

Completing his colourful look and guaranteeing he stayed cool on another balmy day, Rod rounded things off with a distinctive wide brimmed hat.

With most developed countries working their way through another week of lockdown in the fight against coronavirus COVID-19, the rocker made a beeline for the beach during a brief outdoor appearance.

SIR Rod Stewart's wife Penny Lancaster has shown off her stunning figure as the family laps up the sun in Florida.

It will be the last swim for Rod, 75, and Penny, 49, for a while as their local beach in West Palm Beach was closed just hours later due to the coronavirus pandemic. 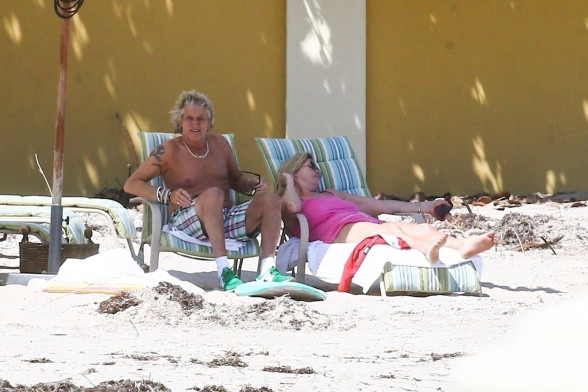 The couple are holed up at their Florida mansion with their sons Aiden, nine, Alastair, 14, and two of Rod's children from previous marriages, Sean, 39, and Ruby, 33.

They enjoyed every minute in the sun, as Penny wowed in a matching pink vest top and shorts.

Her blonde hair fell down around her shoulders, showing off her natural waves.

Hubby Rod, lounged nearby looking golden and tanned in green plaid board shorts and green sneakers. 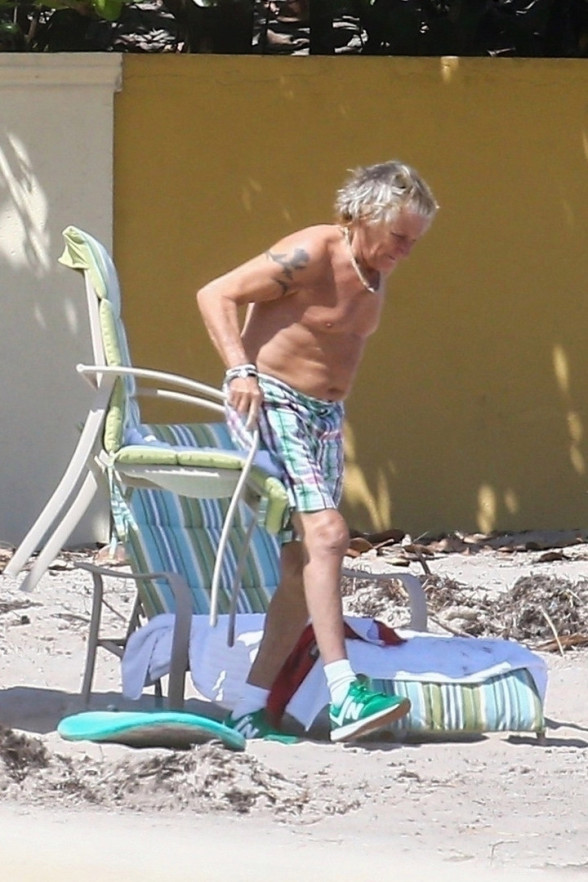 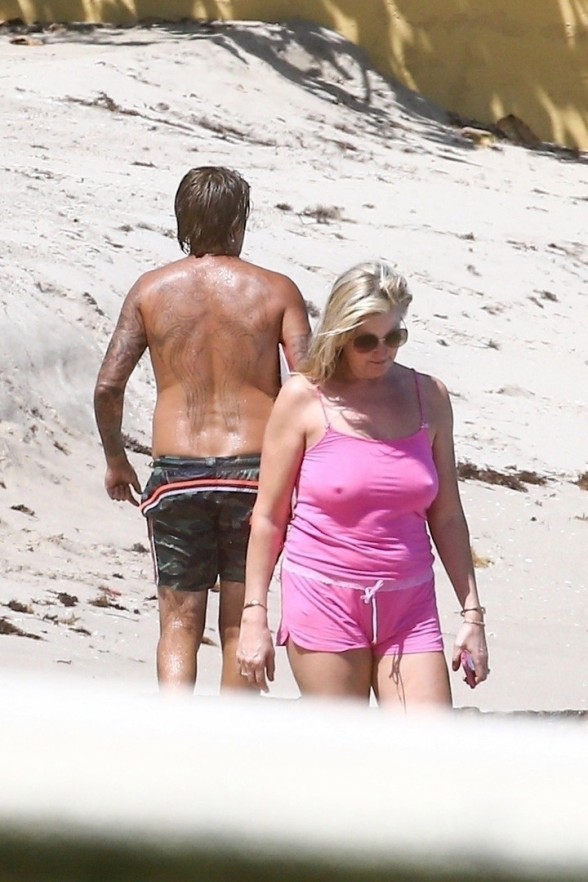 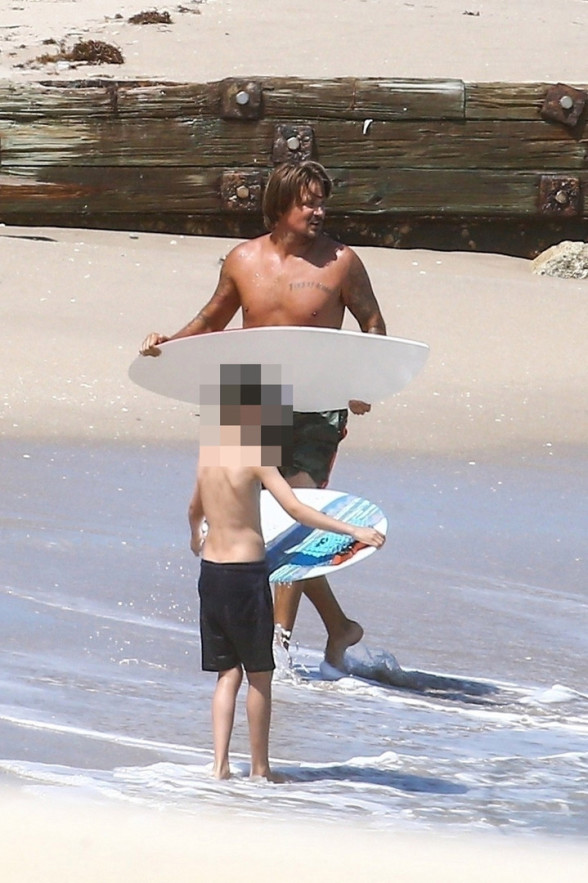 Nearby, Sean and Aiden played in the water on skimboards as the older brother showed his sibling some moves.

Penny laid next to her husband on another lounge chair before casually strolling down to the water to see what the boys were up to. Only hours after their swim Palm Beach Gail L. Coniglio closed all beaches to prevent the further spread of the coronavirus.