Stumbling on stage as a tipsy teenager, Rod Stewart had no idea that he’d just fallen into the limelight for the rest of his life.

In 1964, the young Mod made his TV debut on music show Ready, Steady, Go! to sing his f irst single – Good Morning Little Schoolgirl – in a rather memorable fashion.

Rod said: “Only eight months in the business and I’m on the telly. My mum was really proud of me. “The morning I was due on, I got tanked up in the pub so, by the time my spot came, I was really gone. I had to come down this ladder and walk over towards the camera. Only I never made it. I stumbled and fell down the ladder.”

And Rod, then aged 19, was just one of a flurry of future superstars to go on the show in their first tentative, if in this case clumsy, steps in the music business. From Tina Turner to David Bowie, a new book – Ready, Steady, Go! The Definitive Story of the Show That Changed Pop TV by Andy Neill – reveals the secrets of what went on behind the scenes.

Within six months of its 1963 launch, Ready, Steady, Go! became one of the most popular programmes on the box, attracting up to 14million viewers. And during the three years it was on air, teens stayed in on Friday night waiting for the familiar Manfred Mann theme tune of 5- 4-3-2-1 and excitedly anticipating which artists hosts Keith Fordyce, Cathy McGowan and Dusty Springfield were going to greet on the stage.

One such band was The Rolling Stones, who made their big RSG! debut in August 1963.

Mick Jagger said: “Ready, Steady, Go! was the best rock ’n’ roll TV show of all time. It just seemed more vibrant and real and could, sometimes, be sensational.”

“It was exciting to be on, while other shows – Thank Your Lucky Stars, Top of the Pops, Ed Sul l ivan – were l i ke commercial vehicles.”

The show was adored by teenagers, who related to its informality. And, by 1965, it was filmed entirely live as producer Vicki Wickham and her young group of colleagues, none of them older than 25, transformed the landscape of music TV.

But some stars were intimidated by the presence of Jagger, who used to go to the Green Room to hang out sometimes when the Stones weren’t on the show.

Shy teenager Lulu was one. She said: “At 16, 17, I hadn’t grown up. I tried to act cool but was frightened. I was always afraid of Mick – he’d come up, give me that leer and say, ‘ Ullo, Lolo.’ But I did get to know Mick and the other Stones and they were very sweet.”

ROD Stewart and Penny Lancaster have been enjoying a summer break in Venice.

The couple were all smiles as they posed for a cute pic in the Italian hotspot yesterday. 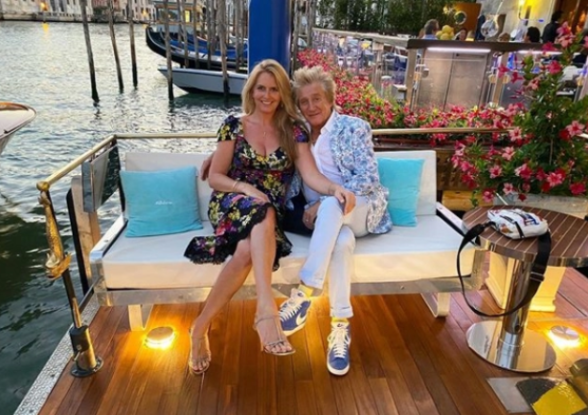 And she revealed that the city, famous for its canals, is one of their favourite destinations.

She said: "One of our most favorite cities of love #Venice".

He is known for his acclaimed song about a woman named Maggie May.

But Penny Lancaster is clearly the woman that has Rod Stewart's heart as the pair enjoyed an evening of fine dining on Saturday.

The rocker, 75, was spotted wearing a white outfit from head to toe as he exited the Zuma restaurant in London on the weekend with his leggy wife, 49 and their family. All white: Rod Stewart rocked an all-white ensemble including bright white shoes as he left the Zuma restaurant in London on Saturday evening with wife Penny Lancaster and their family

To finish off the monochromatic look, he opted for a pair of glistening bright white shoes and a matching belt.

The singer kept his blonde tresses in his iconic messy do.

Meanwhile, his wife's golden locks were perfectly styled in a loose wave, and she opted for a natural makeup look.

Celebrity couple donate treasured items to the British Heart Foundation and encourage the public to bid on the charity’s eBay auction, to raise funds for vital heart research 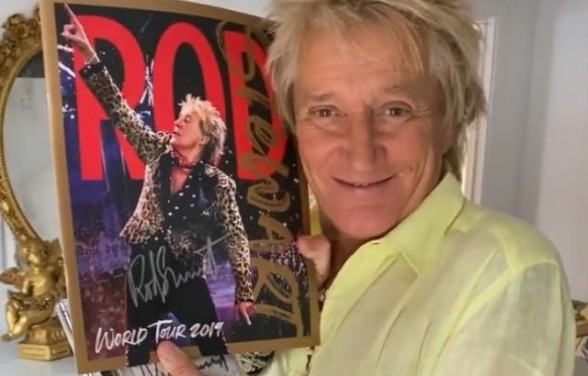 Thousands of UK households have been using the extra time at home to declutter during lockdown – and celebrities are no different. Rod Stewart and Penny Lancaster dug out some of their very best preloved items and posted them off to us, to help raise much-needed money for heart research.

Model and TV personality, Penny pulled out a range of designer clothing and accessories including a stunning black Dolce & Gabbana dress and some stylish Roberto Cavalli and Gucci heels - with Rod adding his own personal touch to his donated pieces, making them a true collector’s item. 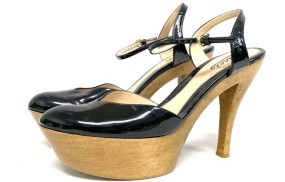 The treasured items are now available to bid on through our eBay shop, until Monday 17th August offering Rod and Penny fans the opportunity to own a piece once belonging to them and most importantly, help the BHF in its recovery from the coronavirus crisis and raise money for our vital research.

Jane Flannery, Retail Regional Director at the British Heart Foundation said: “We want to say a huge thank you to Penny and Rod for their kind generosity in donating these fantastic preloved items to us. These pieces will help us raise much needed funds to help support the 7.4 million people in the UK living with heart and circulatory diseases.

“The coronavirus crisis has had a huge impact on the charity’s income, with our funding of new research expected to fall by a shocking £50 million this year alone.

“Our charity shops and eBay store run solely on donations such as these, so we would really appreciate any quality, preloved items the public have been decluttering while at home – such as clothing, jewellery, books and vinyl records. You can either drop them in to us at the new donation’s points at our shop entrances or use our new freepost donation service, like Penny and Rod. Each item sold will help us raise much needed funds. 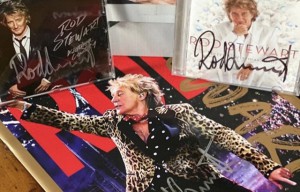 Penny Lancaster, model and TV personality said: “Donating items to the British Heart Foundation couldn’t be easier with their new freepost donation service and is a fantastic way to support the charity – particularly now when they need the support more than ever.

“If like myself and Rod, you’re having a clear out - then why not donate any items you no longer need to the BHF. Your donations could help beat heartbreak for the families around the UK who have sadly been affected by heart and circulatory diseases.”

Donating unwanted items not only helps fund vital heart research, it can also help the environment. Last year alone, we saved an incredible 71,000 tonnes of items from going to waste and 135,000 tonnes of carbon dioxide emissions from being released into the atmosphere.

The coronavirus crisis has had a devasting impact on the charity’s income - costing around £10 million a month. As the UK’s biggest funder of cardiovascular research, the crisis could limit future funding for research and delay important scientific breakthroughs.

Every pound raised in BHF shops and through its eBay store helps to raise vital funds for life saving research.

We would like to encourage all Penny and Rod’s fans out there to help support the charity by bidding on their items now!

Sir Rod Stewart weighed in on the Bournemouth and Rangers furore sparked by Jamie O’Hara’s comments on Drive on Monday.

The talkSPORT host claimed that Steven Gerrard should consider the vacant job at the Cherries, following Eddie Howe’s departure.

Diehard Celtic fan Sir Rod Stewart joined talkSPORT on Tuesday to give his own view on the debate – while he was having his Lamborghini cleaned, naturally.

Sir Rod said: “I just wanted to add my two bob to this Bournemouth and Rangers thing. I’m a Celtic fan, you know that.

“Rangers are an enormous team. You go anywhere in the world you will find a Glasgow Rangers fan club. Not so with Bournemouth. Outside of England no one has heard of them.

“In that respect, Rangers is a huge club. Gerrard, if I were him, I would not leave until he’d won a trophy, otherwise he will be considered a flop up here.

“I think this is the best Rangers team there has been for a while and they are going to give us a serious challenge. Whether they have Morelos, or not, they are up for it.”

The man who sparked the debate, O’Hara, was also on Drive and defended his comments.

O’Hara said: “You can’t get away from the fact it is the Scottish Premiership and Bournemouth have been in the Premier League for five seasons. Alright, they’ve been relegated but they will have the money to get straight back up, so Gerrard in one season could be a manager in the Premier League.”

Stewart responded: “I think if you were Gerrard, would you not leave Rangers with your tail between your legs having been there three years and not won anything? I don’t think he’s that sort of guy.”

Penny Lancaster was the latest Loose Women star to appear live on the show from her home on Monday, and rather than stay in one spot for the entire show, she moved room in each break, offering a tour of her beautiful house in the process!

The 49-year-old lives in Essex with her husband Rod Stewart and their sons Aiden and Alastair, and their house is so luxurious it prompted her co-star Denise Welch to ask whether she lives at Hampton Court Palace. 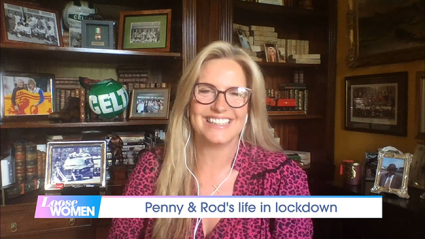 Penny sat on a chair with a cabinet featuring intricate gold detailing visible behind her, where more family photos, candles, and a vase of flowers were on display. To her side, a wooden table is topped with a cream table lamp with a pleated shade, more photo frames and ornaments.

Last but not least, Penny shared a look inside the bedroom she and Rod share when she sat on their bed with one of their pet dogs. The four-poster bed has a patterned upholstered headboard with a pistachio curtain hanging behind the back. 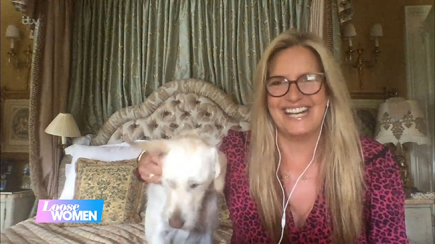 A pair of matching bedside tables with fringed lamps sit on either side of the bed, while the couple also has wall lights hanging overhead, with framed artwork and tapestry-print cushions adding the decorative finishing touches.

Rod and Penny spend the majority of their time at their lavish Essex estate, but also own a second home in Beverly Hills, which they previously revealed in an exclusive interview with HELLO! magazine.