SIR Rod Stewart and his son have appeared in court charged with punching a security guard at a plush US resort.

The rocker, 75, and lad Sean, 39, are accused of attacking Jessie Dixon, 33, after he refused them entry to a party.

The Stewarts each denied a charge of simple battery over the alleged Hogmanay incident at the Breakers hotel in Palm Beach, Florida.

They could be jailed for up to a year if found guilty.

Sir Rod and Sean also waived their right to be present during future hearings.

They indicated their plan to be absent unless the judge demands that they appear.

The case was continued at the Florida court until February 8.

Sir Rod could also face compo claims from Mr Dixon, who is said to be pursuing a civil case.

The Maggie May singer is currently rehearsing at a West Palm Beach sound stage for a tour.

The shows kick off on February 23 with a performance at the Seminole Hard Rock Hotel & Casino in Hollywood, Florida.

At the time, the singer was charged with simple battery after allegedly punching a security guard named Jessie Dixon. On Sunday, The Sun reported that the security guard at the Breakers Hotel is considering suing the 74-year-old rocker for damages.

"We are going to come from a civil point of view. There's a criminal case which we're not involved in," attorney Gawayne Kelly told The Scottish Sun. "We're still talking to Mr Dixon figuring out what's the best route to take. It's early in the process."

According to a probable cause affidavit, Rod told police he and his family were trying to get the children in their group access to a private event at the hotel. Jessie resisted, telling Rod and his group that they didn't have access to the area and asked them to leave. Around this time, Rod's son Sean Stewart allegedly got "nose to nose" with Jessie. A skirmish eventually ensued and police said Rod Stewart then punched the security guard in his left ribcage area.

Surveillance footage shows that Rod and Sean were the "primary aggressors," according to the affidavit.

Legal experts say it's highly likely the situation will be settled out of court.

"You can ask for anything in a complaint but it doesn't mean you'll get it. A great deal depends on the actual damages," Professor Michael Froomkin, from the University of Miami School of Law, told The Sun. "In this case we just don't know how badly the person was injured, how high the medical bills were or how long they were out of work. The less the actual damages, the less the total value."

He added, "There are three kinds of damages. One is out of pocket costs, like medical bills. The second are so-called pain and suffering damages which are to some extent up to the jury's discretion but subject to a judicial review. The third are punitive damages which are quite rare."

Rod and Sean have been ordered to appear at Palm Beach county court on February 5.

The Hoops-daft rocker, 75, rolled out the red carpet for Maureen O’Doherty, 70, who has waited on him at Celtic Park’s Walfrid Restaurant for over a decade.

As well as rail tickets for Maureen and hubby John, the Downtown Train singer also sorted a posh hotel and VIP seats to watch his Christmas gig at the O2 Arena.

Maureen, of Carluke, Lanarkshire, said: “Rod went above and beyond to make my dreams come true.

"It was a day out I’ll never forget.”

Delighted Maureen got to know Sir Rod and wife Penny, 48, along with their sons Alastair, 14, and Aiden, eight, at Parkhead.

She said: “I always ask his sons what they think the score will be.

“But when I told Rod I’d missed my chance to buy tickets for the Hydro, he said, ‘Right, we’re taking you down to London’.

“I was so excited. It was the best present ever.”

Rod’s spokesman refused to comment, but a pal said: “Rod does stuff like this all the time yet never seeks publicity.” 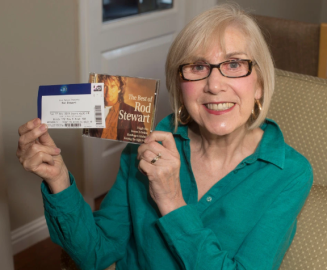 Rod Stewart looks full of beans as he leaves his 75th birthday party at The Ritz on crutches just THREE DAYS after knee surgery... as wife Penny, 48, follows with a HUGE bunch of balloons

Rod Stewart celebrated his 75th birthday with a posh do at London's The Ritz on Friday night - just three days after undergoing knee surgery.

The much-loved rocker showed no sign of slowing down after his ailments landed him in hospital, seen exiting the swanky hotel on a pair of crutches, looking bright-eyed and bushy-tailed.

He was seen leaving the venue in an ivory waistcoat under a black velvet blazer and slacks and an open-collar white shirt. Party boy! Rod Stewart celebrated his 75th birthday with a posh do at London's The Ritz on Friday night - just three days after undergoing knee surgery Glamorous: His wife Penny Lancaster, 48, was tasked with hauling the massive bunch of balloons he'd been gifted to their awaiting car

He seemed to be dragging party streamers with him too, as he left the party with some trailing from his crutches.

His wife Penny Lancaster, 48, was tasked with hauling the massive bunch of balloons he'd been gifted to their awaiting car.

Knees up! The much-loved rocker showed no sign of slowing down after his ailments landed him in hospital, seen exiting the swanky hotel on a pair of crutches, looking bright-eyed and bushy-tailed Both Penny and Rod looked fresh-faced - especially compared to some of the other guests, who stumbled out looking particularly worse-for-wear.

Taking to Instagram the day before his birthday, Rod showed off his dance moves in a video, defying his years as he put on an energetic display.

He wrote: 'Practicing moves for my North American tour! Tickets on sale tomorrow.'

The tour begins on February 23. 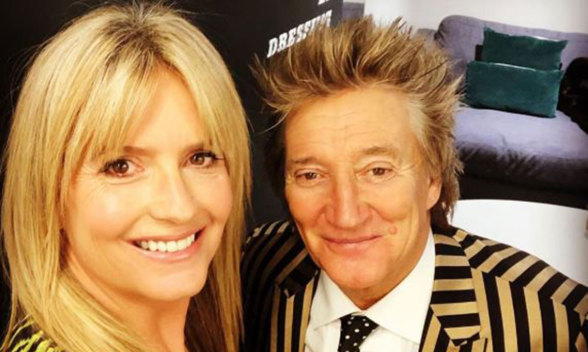 Penny Lancaster made sure to celebrate her husband Rod Stewart's 75th birthday in style on Friday night. The Loose Women panellist treated Rod to a night of luxury at the swanky Ritz Hotel in London after celebrating with his closest friends – and plenty of Celtic-themed gifts, Rod's favourite football team. His special day got off to a great start too after he was released from hospital following knee replacement surgery. Sharing an image of Rod in a bathrobe surrounded by balloons and cakes, Penny wrote: "Roddy is doing remarkably well after his knee replacement surgery on Tuesday (so well that the naughty boy keeps trying to walk without his crutches). Luckily he is being discharged today to celebrate his 75th tonight and home this weekend to see the boys play football!" She later shared another image of her husband surrounded by his nearest and dearest, which she captioned: "Nothing but the best for Rods 75th @theritzlondon with family, friends and Celtic themed gifts."

Penny delighted fans earlier in the day by sharing a throwback snap of herself and Rod at the beginning of their relationship to mark his birthday. Beneath the photo, the 48-year-old wrote: "Love this man, from 55 to 75, happy birthday darling, 'dream team.'" Penny's followers were quick to write Rod birthday wishes of their own. One replied: "Happy birthday lovely Rod," while another added: "Happy birthday! Have a fantastic laugh. Never a dull day!"

Roddy is doing remarkably well after his knee replacement surgery on Tuesday (so well that the naughty boy keeps trying to walk with out his crutches). Luckily he is being discharged today to celebrate his 75th tonight and home this weekend to see the boys play football! ? ⚽️ ? ? ?

Sir Rod Stewart is ordered to trim back tree in grounds of his £4.65m estate that is interfering with emergency services' network to slow them down on 999 calls

Sir Rod Stewart is being forced to trim back a tree in the grounds of his £4.65million estate because it could affect the emergency services' ability to save lives.

But telecom providers have asked the rocker's local council to get him to trim an oak tree in the mansion's sprawling grounds as it is compromising coverage of the Home Office's Emergency Services Network in the area.

The ESN is the Government's new way of enabling communication between the control rooms of the 107 police, fire and ambulance services in England, Scotland and Wales. The service is currently being phased in gradually and aims to cut response times to save more lives.

Even though the oak tree is on Sir Rod's land, it is the telecom provider's responsibility to make sure it doesn't get in the way and potentially slow down response times. In council reports written by WHP Telecoms, they said: 'WHP are retained on behalf of MBNL who manage the EE/Hutchinson 3G networks.

'The tree in question is currently affecting coverage to the area which in this case is affecting the emergency service networks.'

WHP added: 'Our request is to reduce the tree by 5m and reshape to it's rounded shape, the tree also has a lot of dead wood which we also remove.' Consent for the project has been granted.

The ESN scheme is also intended to save money by sharing an existing commercial 4G network which is fully dedicated to its users.

The singer bought the mansion on the edge of Epping Forest, Essex in 2013 but only moved in recently.

Its bedrooms date back to 1712 and overlook a lake set in 46 acres of pastures and ancient woodland.

THE security guard ­allegedly punched by Sir Rod Stewart is hiring a lawyer to deal with the fall-out.

It follows claims the guard was the aggressor in the brawl. 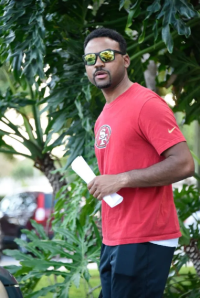 Florida attorney Gawayne Kelly confirmed he was liaising with Jessie Dixon but would not say whether they were intending to launch legal action against the singer.

Mr Dixon, pictured by The Sun for the first time on Saturday, was said to have been hit in the ribs by Rod during a fight at a hotel in Palm Beach, Florida, on New Year’s Eve.

A source told The Sun: “All options are on the table at this point.”

Rod, 74, and son Sean, 39, have been charged with simple battery after The Breakers resort bust-up.

The rocker, married to Penny Lancaster, and Sean clashed with Dixon, 33, after a James Bond-themed Diamonds Are Forever ball at the hotel.

A police report stated Dixon claimed to have been shoved back by Sean before being punched by Rod “with a closed fist” in the ribs. 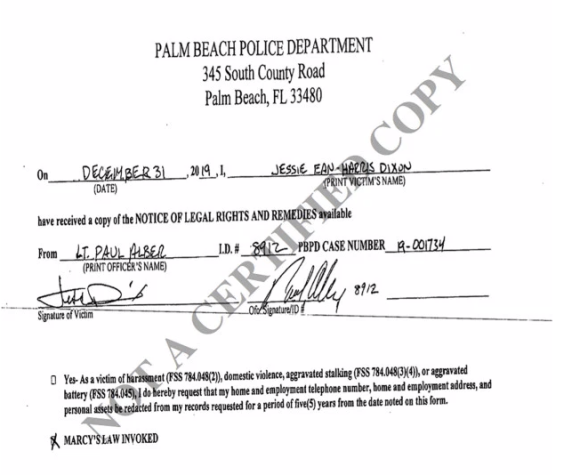 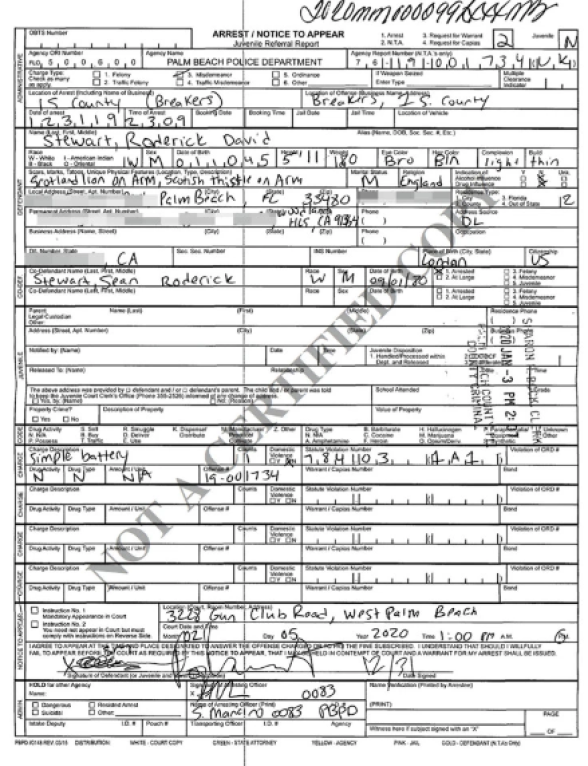 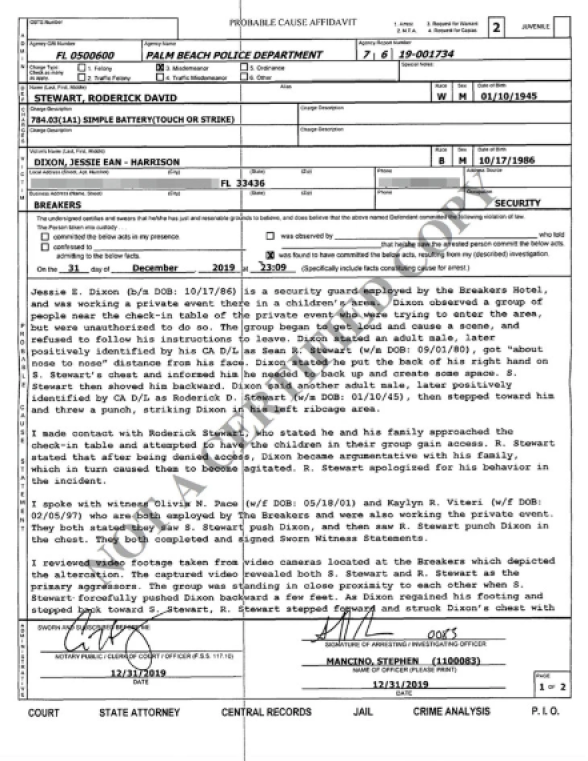 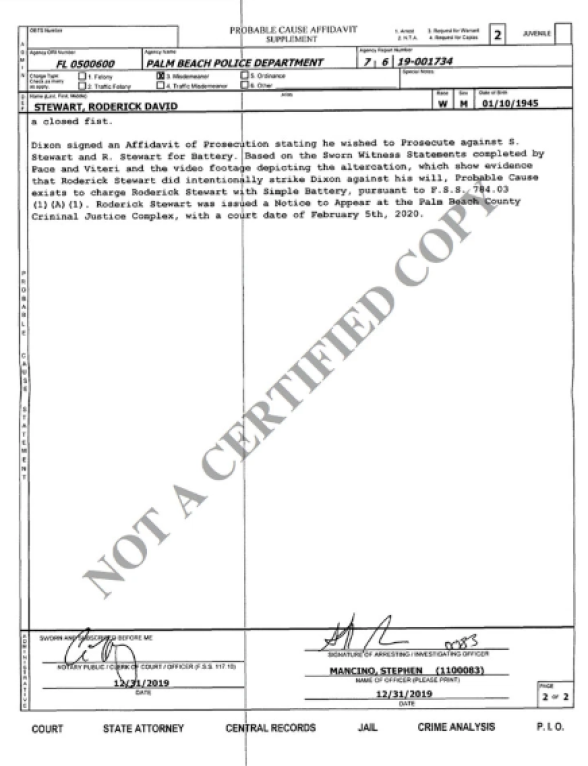 According to a probable cause affidavit, the argument escalated after the two were denied access to a private event

Rod Stewart and his eldest son, Sean, were allegedly involved in an altercation in Palm Beach, Florida, on New Year’s Eve.

The father and son are accused by police in Palm Beach of simple battery, according to a probable cause affidavit obtained by PEOPLE. They were ordered to appear at the Palm Beach County Criminal Justice Complex on Feb. 5, according to the affidavit.

According to the police report, the two — who were with a group of people — became “agitated” after being denied access to a private event being held at The Breakers, a resort in Palm Beach. The event was being held in “a children’s area” of the resort, according to the affidavit.

“The group began to get loud and cause a scene, and refused to follow … instructions to leave,” the affidavit stated.

The argument escalated and the report alleges Sean, 39, “shoved” what is believed to have been an event security guard, with Rod following with a punch shortly thereafter that struck the guard in the “left ribcage area.”

The report stated that the British musician, 74, then apologized for his actions.

“It was a brief misunderstanding and neither Rod nor Sean were detained,” a source familiar with the situation told PEOPLE. “Apologies were exchanged and there were no injuries.”