The 75-year-old singer is to install two male and two female ancient Greek-style sculptures next to his garden pond.

Sir Rod Stewart has been given the go-ahead to build four topless statues by an ornamental pond at his £5million mansion.

The 75-year-old singer and his wife Penny Lancaster are to install two male and two female ancient Greek-style sculptures on the pillars of a portico at their Grade II-listed property in Essex.

The garden makeover will also include a tiered stone water feature at the base of the portico, a small paved seating area and lawn pathways within a walled garden close to the main house.

The plans were submitted to Epping Forest District Council in June and the project has now been granted planning permission by officials after no objections from neighbours were received.

A statement submitted on behalf of Sir Rod and Penny, 49, as part of the application said the couple wanted to create a “classical garden” at their home on the edge of Epping Forest.

Among the stuff heading to the good cause are deisgner shoes and gear - including Gucci heels and Dolce & Gabbana outfits.

And a host fo signed CDs and posters from hubby Rod are also among the kind donation.

She's now encouraging fans to do the same - pointing them in the direction of the BHF's new postal donation service.

Penny was keen to see if trendy “micro pigs” would fit in with the rest of their menagerie. 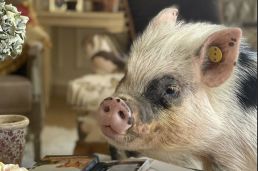 The model and Loose Woman panellist has recently been showing off her wild garden in the Essex home she shares with Rod and their two children.

Penny, 49, was keen to see if trendy “micro pigs” would fit in with the rest of their menagerie - including their Labradoodles Blondie and Lily and two free range hens she was given by a friend in February ahead of lockdown.

Penny asked one of her friends if she could borrow the two-strong herd of tiny pigs to see how easily they would adapt to their lifestyle at the £4.65 million home. 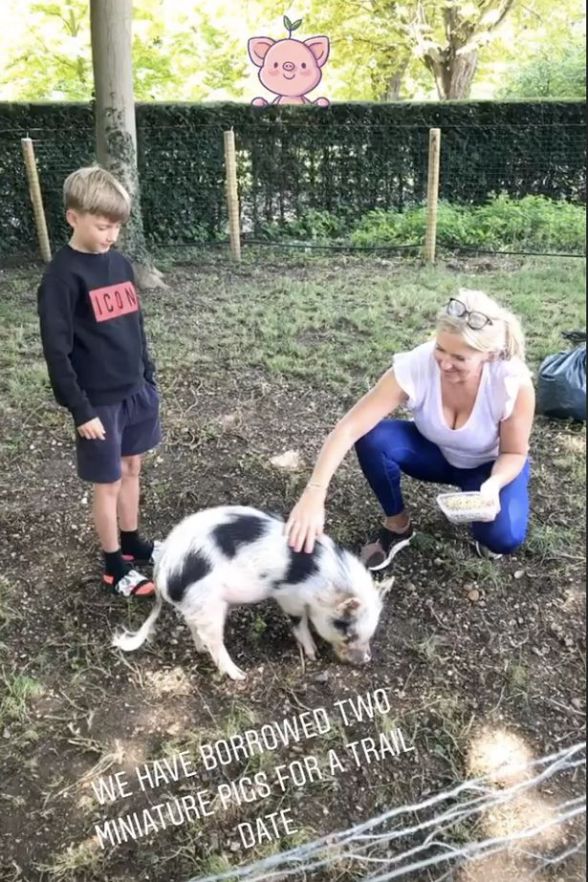 As she was pictured feeding one alongside her youngest son Aidan she told fans: “We have borrowed two miniature pigs for a trial date.”

After giving the ‘thirsty boys’ some drinking water and letting them forage in the garden, she decided it was time to let them inside the house.

She invited one of the pigs to try out her living room where it appeared to enjoy a pile of Homes and Gardens magazines alongside a caption saying: “It’s a pigs life.”

PICTURE EXCLUSIVE: Rod Stewart, 75, and his wife Penny Lancaster, 49, get FLASHED by man who pulls his trousers down as they depart Annabel's after a night out

They are no strangers to a raucous night out on the town.

And Rod Stewart and Penny Lancaster got quite the surprise when a man pulled his trousers down while they were leaving Annabel's in London on Saturday.

The rock star, 75 and his other half, 49, appeared to see the funny side of the cheeky gag as they both laughed on their way out of the venue. Awkward: Rod Stewart, 75, and Penny Lancaster, 49, got quite the surprise when a man pulled his trousers down while they were leaving Annabel's in London on Saturday

Obviously surprised by the man leaping in front of the door and flashing them, Rod pointed at him as he and Penny quickly moved past with their friends.

Penny was seen laughing with her pals as she made her way down the steps and climbed into a car with Rod.

The model looked radiant for her night on the town, donning a purple floral print long-sleeved mini dress.

Penny added height to her frame with a pair of purple, open-toed heels and carried a matching handbag. 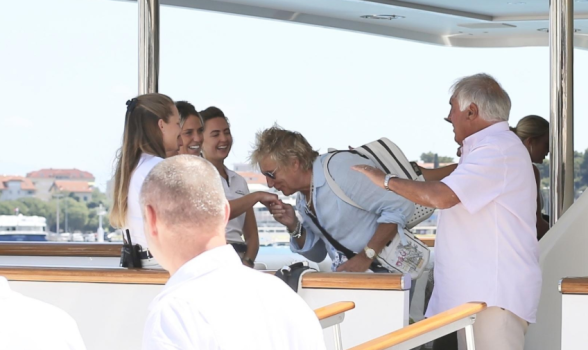 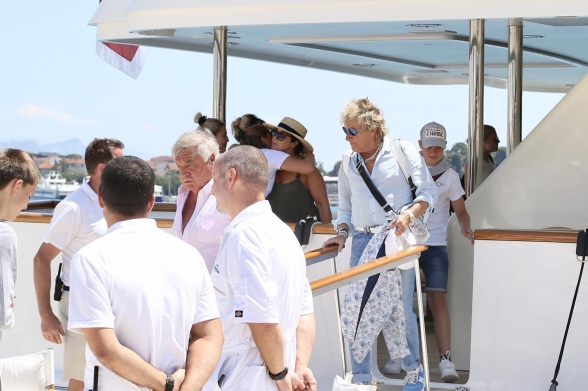 Rod Stewart’s HOLIDAY in Croatia has come to an end. Before leaving the yacht on which they spent their vacation, the rocker and his family said goodbye to the crew, and Stewart was delighted with the way he greeted the women’s crew.

He kissed the girls’ hands in greeting and brought a smile to their faces, and his son Liam also received a soccer ball with a red and white pattern as a gift from the crew. The farewell before going on the plane was filmed by photographers. He is on an idyllic family break in Croatia amid the global health crisis.

And Rod Stewart took extra precautions against coronavirus as he donned two face masks en-route to a family dinner in Split with wife Penny Lancaster on Tuesday.

The rocker, 75, stepped out wearing a white medical face mask, which he wore with leopard print PPE as he walked with a glamorous Penny, 49. Good one Rod: Rod Stewart took extra precautions against coronavirus as he donned two face masks en-route to a family dinner in Split, Croatia with wife Penny Lancaster on Tuesday

The star looked typically stylish and summer-ready in a crisp white shirt, paired with a matching blazer and chinos.

The legendary singer paired this with a white satchel and a selection of gold chains over his bronzed chest.

Rod wore his blonde locks in his signature spiky style while accessorising with stylish shades.

Rod Stewart, 75, sports a nautical-inspired striped top and bright yellow pants as he and Penny Lancaster, 49, disembark their luxury yacht in Croatia

And Rod Stewart was seen stepping out of his luxury yacht for an outing with wife Penny Lancaster and their family in Trogir, Croatia, on Sunday.

The Maggie May singer, 75, opted for a nautical-inspired ensemble as he paired a black-and-white striped top with yellow trousers while disembarking the boat with the model, 49. Standing out: Rod Stewart, 75, sported a nautical-inspired striped top and bright yellow pants as he and Penny Lancaster, 49, disembarked their luxury yacht in Croatia on Sunday

Rod completed his look by wearing a pair of matching yellow trainers, while he kept his personal items in a cross-body bag.

The rocker was later seen in a different ensemble as he swapped his monochrome shirt for a white floral print button-up top. Penny put on a stylish display for their outing off the yacht as she wore a chic leopard-print dress which had a plunging neckline.

Her blonde locks were brushed into a sleek, straight style that fell over her shoulders in loose waves, while she used a natural palette of make-up

Stunning: Penny put on a stylish display for their outing off the yacht as she wore a chic leopard-print dress which had a plunging neckline Wardrobe change: The rocker was later seen in a different ensemble as he swapped his monochrome shirt for a white floral print button-up top

But Rod Stewart took a break from the wax on Friday as he was spotted with floppy hair during his family break with wife Penny Lancaster in Croatia.

The Maggie May singer, 75, looked drastically different as he wore his blonde locks in an au naturel style during a relaxed morning aboard the family's yacht in Hvar. The youthful star showed off his sense of style, flashing his bronzed chest in an unbuttoned crisp white shirt paired with nautical pinstriped shorts.

The singing icon paired this with bracelets and a beaded crucifix necklace.

The delighted star looked chilled as he was joined by wife Penny on deck, with the former model, 49, wowing in a sequinned cover-up. Smile: The star looked delighted as he took in the scenic views alongside wife Penny, 49 Devoted dad: Rod was also joined by son Liam Stewart, 25, aboard the yacht, whose mother is his ex-wife Rachel Hunter

Rod Stewart, 75, looks dapper in a white cap and linen shirt as leggy wife Penny Lancaster, 49, stops to takes pictures of him on Croatian getaway

They were pictured painting the town red at exclusive member's club Annabel's once lockdown restrictions were easy over the weekend to allow bars to open.

And following their night out, Rod Stewart and his wife Penny Lancaster hopped on a plane to enjoy a getaway to Dubrovnik, Croatia, on Tuesday.

The rocker, 75, looked typically dapper in his holiday attire as he sported an open-neck white linen shirt, which he teamed with a pair of pale grey shorts. Holiday time! Rod Stewart and his wife Penny Lancaster hopped on a plane to enjoy a getaway to Dubrovnik, Croatia, on Tuesday

Rod didn't hold back on his accessories, as he donned a baker boy style cap and paid homage to his football club with a diamond-encrusted Celtic necklace.

The singer finished his look with a pair of knitted Adidas trainers and an arty Dolce and Gabanna satchel bag, which was covered in colourful sketches.

Penny, 49, ensured she captured Rod's fabulous look as she got out her phone to take pictures of the Maggie May hitmaker. Meanwhile, Penny herself looked seriously chic in a pretty white lace blouse, which she teamed with a pair of thigh-grazing denim mini shorts.

The model added a fierce edge to her ensemble with a pair of leopard print ballet pumps and a matching shopper bag, which she slung over her shoulder.

Penny displayed her endless pins in the chic ensemble, while shielding her eyes from the rays with a pair of stylish reflective shades.

Rod and Penny : Night On The Town Dynamic duo: Rod Stewart, 75, and wife Penny Lancaster, 49, led a slew of stars getting dressed up to head out on Saturday, as bars, pubs and restaurants across the nation reopened 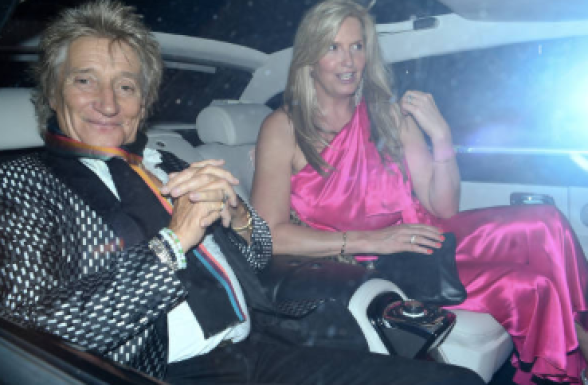 But his model wife stole the show in a striking fuchsia satin midi dress, which boasted tie-wrap detailing around the waist, finishing the look with a pair of black pointed-toe heels and an understated clutch bag.

The couple walked out of the exclusive celebrity hot-spot hand in hand as they headed home after their night out.

ROD STEWART'S wife Penny Lancaster has given their fans an insight into their transformations after the coronavirus lockdown measures started to ease from today.

While hairdressers have reopened today with social distancing rules after being closed for three months of the coronavirus lockdown, Penny took to her Instagram story to share her delight over having her "overdue" haircut.

In view of her 103,000 followers, the TV star shared a selfie of her sitting down with foils in her hair and having a pedicure.

"@stevencareyhair my hairdressers since I was 17." 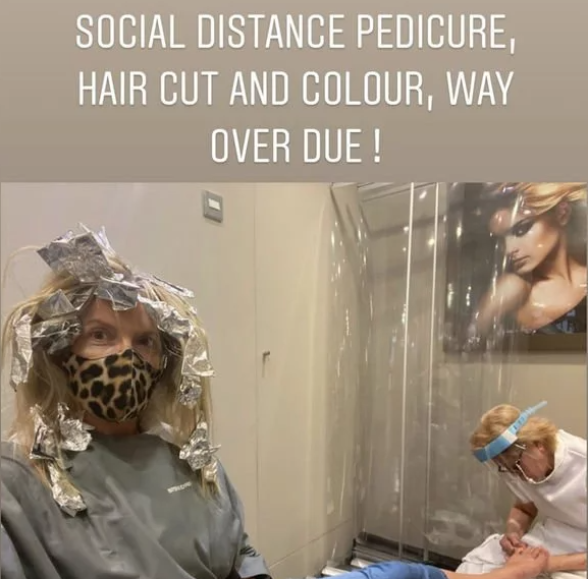 Soon afterwards, Penny wrote "guess who," alongside a snap of Rod sitting in the chair having his hair cut.

She then shared an additional post to which she captioned: "Now for the famous blonde highlights."

It comes after Rod's plans to erect four topless statues at his £5 million country estate in Essex were revealed after the couple moved back to the UK from their home in Florida.

The Maggie May hitmaker reportedly applied for planning permission to his local council for the sculptures to be set into the four pillars of the portico. 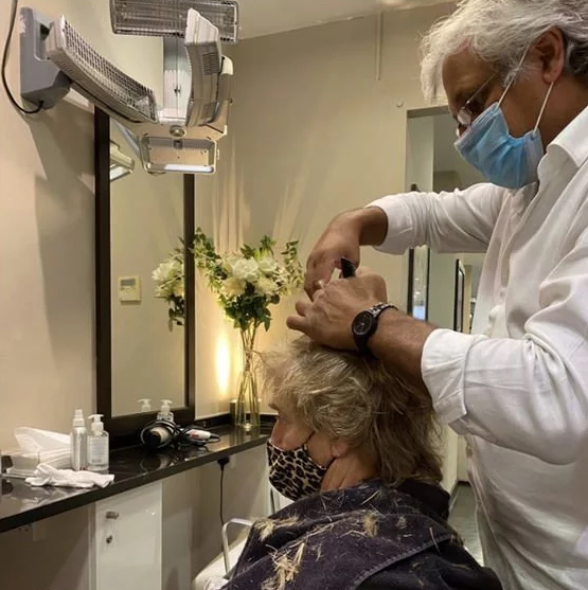 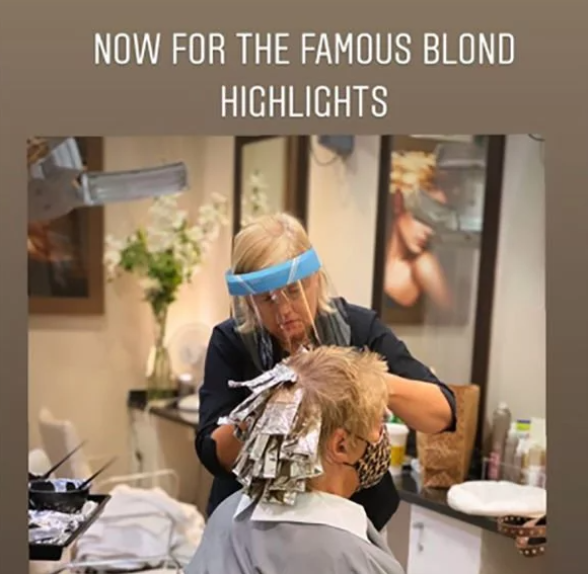