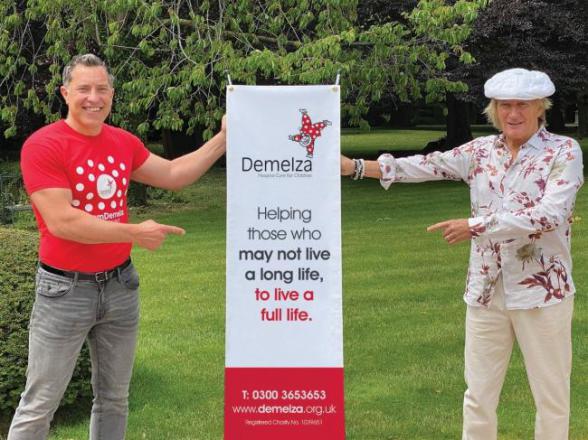 A ROCKSTAR is helping a determined fundraiser as he takes on a fitness challenge for a children’s hospice charity this weekend.

Sir Rod Stewart and his wife Penny Lancaster are sponsoring Penny’s brother Olly Lancaster as he completes a gruelling endurance test, including 1,000 press ups, a 4,000 metre swim and a 10,000 metre run.

Sir Rod and his wife are also offering up the grounds and facilities at their home in Essex for Olly to complete his challenge.

Olly said: “Since 2011 a team of Dads, ‘Wags’ and Kids have been raising money for Demelza.

“This year, due to Covid-19 and its restrictions, all the charity events we entered were cancelled so I’ve decided to do my own and hope to complete my challenge in under 8 hours, taking the Phat Dads’ fundraising total to over £100,000.

“Demelza now faces an extraordinary shortfall in fundraising due the current pandemic but their services are still vital. All of the money raised will help children and their families with end of life care and essential support.”

Penny Lancaster welcomed a new addition to her family this week – and it couldn't be cuter! The mum-of-two posted a photo to Instagram showing one of her chickens with a baby chick nestled close to her chest. The star captioned the sweet picture: "Congratulations Mummy." This isn't the first young chick Penny's welcomed recently. 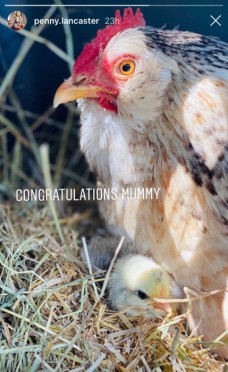 Rod Stewart, 75, and Penny Lancaster, 49, enjoy a takeaway and glass of wine in the back of their car before heading to the park while toast on their 13th wedding anniversary

He recently announced that she was “everything” to him while he was thinking about their relationship.

And Rod Stewart and Penny Lancaster looked happier than ever when they toast their 13th wedding anniversary on Monday.

In sweet new Instagram snaps, the rocker, 75, and his model wife, 49, enjoyed a takeaway and glass of wine in the back of their car before heading out for a day at the park. Cheers: In sweet new Instagram snaps, the rocker, 75, and his model wife, 49, enjoyed a takeaway and glass of wine in the back of their car before heading out for a day at the park

Maggie May’s hitmaker pulled out all the stops in a cornflower blue blazer worn over a white patterned shirt.

He added cropped white skinny jeans to his ensemble and rounded off his striking look with striped socks, jazzy blue and yellow sneakers and a straw hat.

Meanwhile, Penny looked radiant in a multicolored wrap dress with a ruffled hem.

The TV personality shaped her blonde locks in a fishtail braid and chose to go barefoot for the snap.

Penny Lancaster, who joined police on the beat in a TV documentary last year, is now set to become an officer for real.

The Loose Women panelist signed up to become a special constable after taking part in Channel 4's Famous and Fighting Crime, where she was seen working with officers from Cambridgeshire Police.

In a 'terrifying' experience during filming, she was at one point confronted by a drug dealer who threatened to stab her. 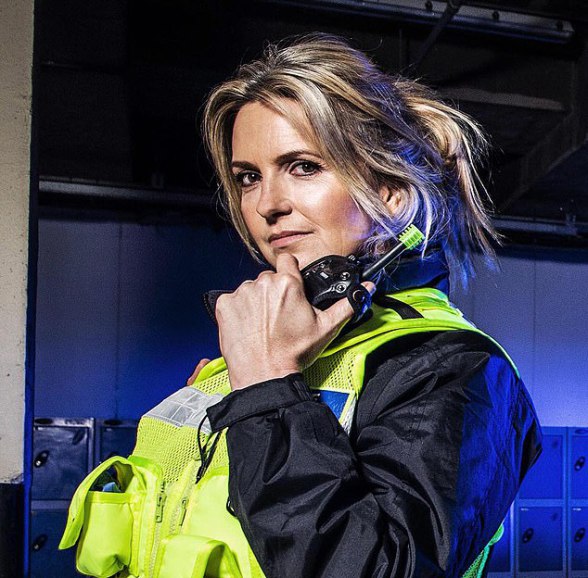 Despite the scare, however, the former model took so much from her stint in uniform that she has now successfully completed the application process for the part-time role.

Penny, 49, who is married to Sir Rod Stewart, will join the City of London Police after undergoing training once lockdown restrictions are lifted.

She said: 'I did a show called Famous and Fighting Crime where I was involved with the police.

'It was terrifying but I never felt more comfortable in a position and I felt like this is where I was supposed to be.

'I have signed up to be an officer.

'I had to sit exams, English and maths type of exams, and go for an interview with two officers. And then I did a fitness test which was the bleep test which was pretty tricky so I had to get fit for that and I passed.

'Then I had to do this massive vetting form going through all personal details of myself, my family, people I know and all that kind of thing.

'So now I'm waiting for the training to begin so I can serve the community.

The mother-of-two, who married Sir Rod in 2007, said the experience made her realise how underfunded the police are.

Both her husband and her parents have admitted concerns about her joining the force, but Penny, speaking on an Instagram Live chat with her former Strictly Come Dancing partner, Ian Waite, is determined to take on the challenge.

She added: 'My mum and dad are not so keen on the idea but I can't wait.

'I feel sorry for the police right now because they really, really have their work cut out for them trying to create social distancing while trying to arrest someone.'

Speaking previously, Sir Rod, 75, said: 'No one's ever been able to stop Penny if she's decided she wants to do something. And I'm always behind her all the way.

'But am I scared for her? Yes, a little. Did you see that drug addict who threatened to stab her with a needle on the TV show?

'As long as she's accompanied at all times by another constable, she'll be okay.'