Rod Stewart's message to North-east fans ahead of Durham gig.

The concert will be one of only two mainland UK performances.

Rock legend Rod Stewart has issued a special message to the North-east.

As part of his world tour, starting this summer, the star will play at Durham County Cricket Club’s Riverside Ground on June 9.

The tour, dubbed Hits 2017, will visit just a handful of venues across the UK, Las Vegas and then Europe.

The gig at Durham is the second of two dates before he heads to headline the Isle of Wight festival on Sunday, June 11.

The 72-year-old musician appeared on stage, surrounded by his band, to tell the nation he “can’t wait” to play the Durham gig.

He will appear at the Emirates International Riverside Cricket Ground to thousands of fans.

You can buy tickets here.

Rod’s appearances at Shrewsbury and Durham will be his only mainland UK appearances in 2017.

In 2016 he held two sold-out UK tours - The UK Hits Stadium Tour followed by the arena tour, ‘From Gasoline Alley to Another Country Hits’. He's instilled his love for Celtic's football team into his two youngest sons.

And Rod Stewart got into the Scottish spirit once again as he headed out in Bel Air, California with Aiden, the youngest of his brood, on Wednesday.

The legendary rocker, 72, and his six-year-old son donned matching football t-shirts from his favourite team as they grabbed a drink from Starbucks during their bonding day.

Rod looked in high spirits as he spent quality time with one of his eight children.

The British musician was decked out in a green and white jersey top, which he teamed with grey sweat-bottoms, which boasted lime green stripes down the side

His mini-me looked adorable in the matching sports top, which complemented his white shorts and rolled up socks.

He looked excited as he joined his dad for a stroll in the sunshine, before settling down for a warm beverage at the popular coffee franchise

The football fanatic further showcased his love for Celtic as he took his two youngest children Aiden and Alistair, 11, to a Ladbrokes Scottish Premiership match in Glasgow two weeks ago.

In his personal life, the rocker now enjoys a good relationship with all of his children. 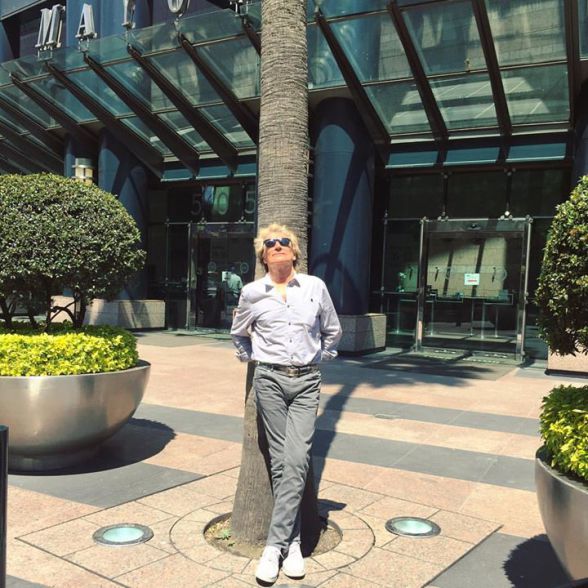 Accompanied by five musicians who included two drummers and also three beautiful chorus players, English punctuality was present when exactly at 20:00 hours, the also member of the Rock Hall of Fame made his appearance wearing black trousers and A silver bag that combined very well with the black and white tones of the stage
After thanking the respectable for his assistance, the musician and singer expressed: "Enjoy yourself", which raised the jubilation of the audience that filled the Copper Dome.

Topics such as Some Guys Have All the Luck, Tonight's the Night, Downtown Train and BabyJane, among others, were loudly chanted by people mostly adults who all celebrated the star.

Much energy and joy emanated the 72-year-old producer who did not leave out of his repertoire It's a Heartache, Some Nights and Forever Young, themes where he demonstrated the vitality he still retains.

The acoustic session seasoned with a harp and two violins included melodies such as First cut is the Deepest that showed the musical versatility of Stewart.
You're in my Heart gave way to the top of the night when the newly appointed "sir" sang I Do not Want to Talk About It, letting the audience sing that did not disappoint with their chorus of voices.

The classics Have I Told You Lately and Da and I Think I'm Sexy were one of the most acclaimed themes of the evening, which transported more than one to his youth 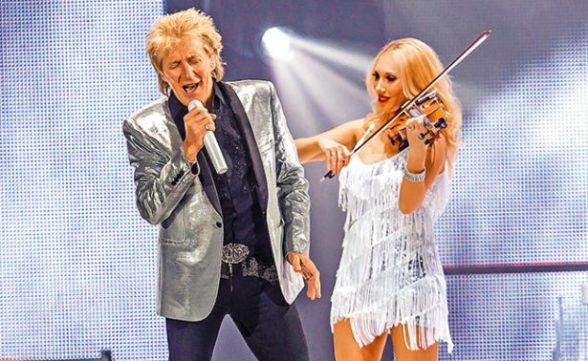 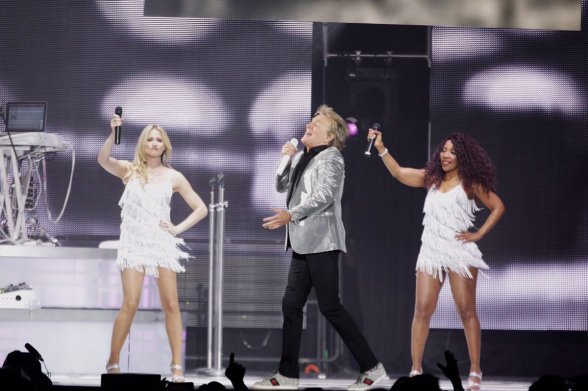 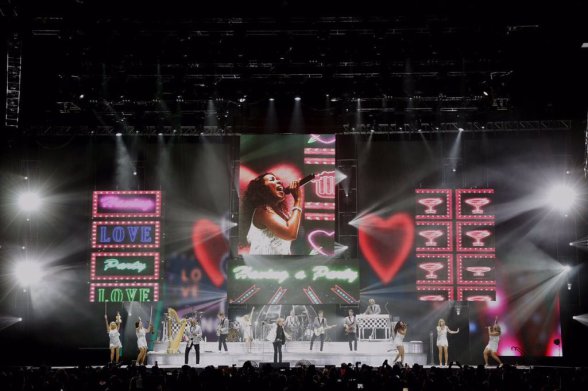 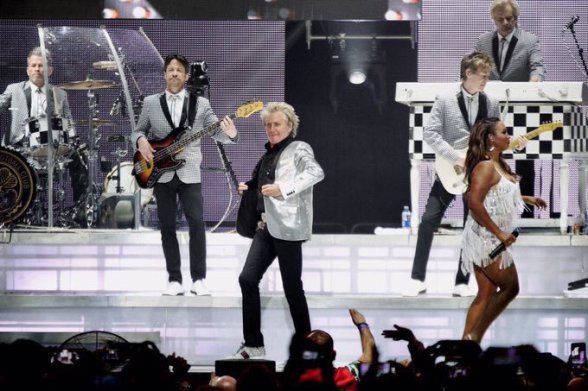 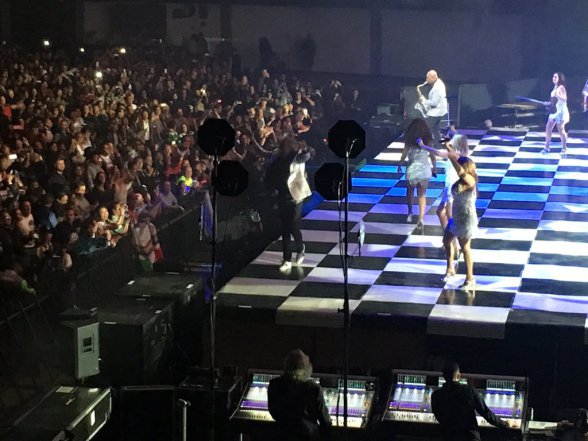 Sir Rod Stewart, 72, enjoys a catch up over breakfast with eldest son Sean, 36, between gigs

He is a father to eight children with five different women.

But Sir Rod Stewart enjoyed some quality time with his eldest son Sean, 36, as they grabbed a spot of breakfast in Bel Air, California on Tuesday.

Prepared for the spring chill, the musician wrapped up warm in a black zip up jacket with a fur collar, which he teamed with a woolly scarf and comfortable trainers.

In contrast, Sean - the Maggie May hitmaker's son from his first marriage to Alana Hamilton, with whom he also raises daughter Kimberly Stewart, 37 - didn't appear to bothered by the chilly conditions as he sported stripy shorts.

Sean did opt for a warmer grey sweatshirt and matching shoes as the twosome managed to grab a bite to eat between Rod's busy schedule.

He kicked off to his Las Vegas performances last week at The Colosseum at Caesars Palace, which will wrap on April 1. SIR Rod Stewart has led Scotland’s tributes to Chuck Berry, revealing that the first album he ever bought was by the legendary musician.

Berry, who is credited as one of the founders of rock and roll, died on Saturday night at the age of 90.

He played numerous gigs in Scotland over the years, influencing fellow musicians here and across the world.

Sir Rod said: “It started with Chuck Berry. The first album I ever bought was Chuck’s ‘Live at the Tivoli’ and I was never the same.

“He was more than a legend, he was a founding father. You can hear his influence in every rock ‘n’ roll band from my generation on.”

He said: “The lyrics, music and riffs that he came up with were incredible.

“When it comes to inspiring bands and musicians, he is number one. His musical legacy is quite remarkable.”

Born in St Louis in October 1926, Berry was known for his energetic stage presence and his signature move - a one-legged hop called a “duck walk”.

His hits included Johnny B Goode, Maybellene, Route 66, You Never Can Tell and Roll Over Beethoven.

A Herald review of his 1994 gig at the Glasgow Royal Concert Hall gushed: “Chuck did deft slow blues tunes. Chuck smiled a lot. Chuck was mellow and at ease with himself. Chuck divined no slights upon his person. We perceived no flaw in his standing as a rock ‘n’ roll deity.”

However, Berry disappointed 2,000 Scottish fans in 2005 when he refused to go on stage at the last moment - after a row over not being allowed to drive along in his automobile.

The rocker had wanted to drive himself to the gig, again at the Glasgow Royal Concert Hall, but organisers said he was not insured to get behind the wheel of the Mercedes they had provided.

Mhairi Cowley, a spokeswoman for gig promoters CPL, said at the time: “He wanted to travel in an S-Class Mercedes, which we were happy to provide, but he wanted to drive himself, which we couldn’t allow because of insurance issues. We sat at the airport for ages until he eventually hired one himself to drive, which we agreed to pay for.

“He did arrive at the venue, but that was to get the money for the hire car.”

Chuck Berry is survived by wife Themetta Suggs-Berry, whom he met a year after his release from prison for armed robbery in 1947, and four children.

Sir Rod Stewart Adds A Summer Leg Of Concerts To His Hit Las Vegas Residency "Rod Stewart: The Hits" At The Colosseum At Caesars Palace

LAS VEGAS, March 20, 2017 /PRNewswire/ -- Since opening his acclaimed Las Vegas residency seven years ago at The Colosseum at Caesars Palace, rock music superstar, Sir Rod Stewart,  continues to perform to sold out houses and garner rave reviews for "Rod Stewart: The Hits." To keep up with demand, nine new shows have been added this summer, scheduled August 15 through September 3. Tickets for new concerts will go on sale to the public beginning Friday, March 24 at 12 noon PT.

Since its debut in 2011, "Rod Stewart: The Hits." has been experienced by over a half million fans and continues to be one of the best reviewed and must-see shows on the Las Vegas Strip. With no shortage of chart-topping tracks, the Las Vegas production delivers show stopping classics spanning five decades that captivates fans with an ever-changing set list including: "You Wear It Well," "Maggie May," "Da Ya Think I'm Sexy," "The First Cut is the Deepest," "Tonight's The Night" and "Hot Legs" mixed with some timeless rarities and recent hits.

Rod Stewart is one of the best-selling artists in the history of recorded music, with over 200 million records sold worldwide. His signature voice, style and songwriting have transcended all genres of popular music, from rock & roll, new wave and even tackling the Great American Song Book; making him one of the few stars to enjoy continued success over five decades. He's earned countless of the industry's highest awards, among them, two inductions into the Rock and Roll Hall of Fame, the ASCAP Founders Award for songwriting, New York Times bestselling author, Grammy™ Living Legend, and in 2016 he officially became "Sir Rod Stewart" after being knighted by Britain's Prince William at Buckingham Palace for his services to music and charity. From glittering costumes to his most beloved songs, the Scottish rocker left the audience wishing for an encore 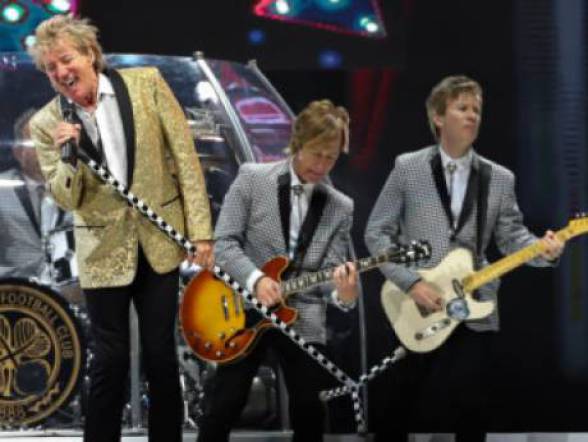 They were belting it out with the legendary rocker in the encore.

Still whistling and humming it while striding out of the du Arena, just like septuagenarian Rod Stewart continues to strut across his stage.

And most likely the “oooohoohoooo” riff of Do Ya Think I’m Sexy will be stuck in every gig-goer’s head for at least the rest of the weekend.

From the costume changes of diamond encrusted designer trainers and diamond-coated shirts to the slickest of blue suits that the rocker realised he’d forgotten to do up his zip (jam on your nose, as it’s known as in Scotland).

Jammily, Stewart got out of that one by quipping: “You weren’t missing anything.”

He doesn’t miss a trick. And it’s only by actually seeing him live you fully appreciate the astonishing amount of hits in his back catalogue.

Maggie May, Tonight’s the Night, Baby Jane, Sailing, You’re In My Heart — and that’s only part of it.

His cover tracks of Downtown Train, The First Cut is the Deepest, I Don’t Want To Talk About It and Have I Told You Lately go down a storm — with the First Cut beautifully accompanied by a harpist.

The early tracks in Stewart’s set are played alongside backing vocalists and dancers clad in tartan kilts. The backdrop to the set features greenery resembling the Highlands.

Add the Celtic Football Club crest adorned on the front of drummer Matt O’Connor’s drum kit and it doesn’t take much to be whisked from the desert of the UAE capital to Stewart’s family land of Scotland.

The Celtic-daft rocker even played a highlights video of his beloved side’s 5-1 thumping of Glasgow rivals Rangers earlier this season during You’re In My Heart — which of course namechecks his favourites.

“A legend,” is how Dubai-based Ryan Quinn, one of a number of Celtic fans in the packed crowd, described the star.

Have no doubt that this legend can still rock a pair of tight trousers.

Come on sugar let me know…