Rod Stewart, 75, stands out in a bright yellow shirt and vibrant shorts as he enjoys a stroll in Florida amid coronavirus pandemic Fresh air: Rod Stewart opted for a solo outing as he embarked on a stroll in Palm Beach on Monday during the coronavirus pandemic

Injecting his appearance with even more colour, the belter rounded off his outfit with a pair of red trainers, and accessorised with a gold chain necklace.

Rod Stewart, wife Penny and sons Sean and Alistair disinfect their hands when they leave the surf shop The state of Florida is currently in a non-essential closure due to the global coronavirus pandemic.

Still, Rod Stewart and his family managed to find an open sports store on Saturday while out and about in Palm Beach.

The 75-year-old Maggie May singer was joined by his wife Penny Lancaster, 49, his eldest son Sean, 39, from his marriage to Alana Hamilton, and son Alastair, 14, who is Penny’s oldest child with Rod.

Retail Therapy: Rod Stewart and his family managed to find an open sports store on Saturday while out and about in Palm Beach amid the corona virus crisis [pictured with son Sean]

The family left the store – which will currently be one of the few active retail businesses in the state – with Alistair brandishing a new surfboard under his arm.

The clan got their hands cleaned when they left the store – Rod in a white shirt, striped shorts, and a pair of white sneakers.

Sean was all gray, Alistair had a black outfit and Penny striped sundress, slippers and shades, her blonde locks loosely around her shoulders. New Board: 75-year-old Maggie May singer was joined by wife Penny Lancaster and son Alastair, 14, who is Penny’s oldest child with Rod

He underwent a successful knee replacement back in January due to an injury he sustained playing football over the years.

And now getting back to working on his fitness, Rod Stewart was seen taking his bike for a spin in Miami on Thursday, as he enjoyed a quick break from quarantine during the coronavirus pandemic.

The Maggie May singer, 75, donned his gym gear and a protective blue helmet, as he took to the streets on his pushbike while soaking up the sunshine. On yer bike: Rod Stewart, 75, was seen taking a break from quarantine in Miami to go for a bike ride around the neighbourhood on Thursday

Rod, who was sporting a pair of bright green trainers, was seen climbing off of his bicycle as he returned home from his ride around the block.

Seeming in good spirits, the crooner kept his helmet on while pushing his bike back into his home.

He seemed a little out of breath after working up a sweat on his exercise break that saw him make the most of the fresh air, but his knee proved to be no difficulty for him. At the end of February, Rod's wife Penny Lancaster, 49, teased that there is 'no stopping' the star after his surgery, as his knee is now 'better than ever'.

Speaking to The Mirror while sharing an update on Rod's recovery, Penny said: '[Rod has] just done two private shows in Florida and he said, "My knee is better now than it has ever been."

'He said he was running sideways and it has all been sorted. He is like a masterclass of knee replacement and there is no stopping him.'

“Even a legend has to clear out his garage" as the rock star makes the most of his time in isolation.

Sir Rod Stewart has used his time in coronavirus lockdown to have a right good spring clean.

Rod - who is holed up in his house in Beverley Hills in California - tweeted out two photos of himself on the back of a truck, surrounded by paint pots and other junk.

The 75-year-old Hoops fanatic even took the time to paint ‘Celtic’ on the door of the flatbed truck as he cleared out junk from one of his American homes.

As one of his diehard fans noted on Twitter said: “Even a legend has to clear out his garage.”

Others expressed astonishment that he could do odd jobs clad in white “and still look good.”

While a quick witted wag, called Harry, referenced one of Rod’s biggest hits writing: “All that paint?!! I suppose the First Coat is the deepest….” 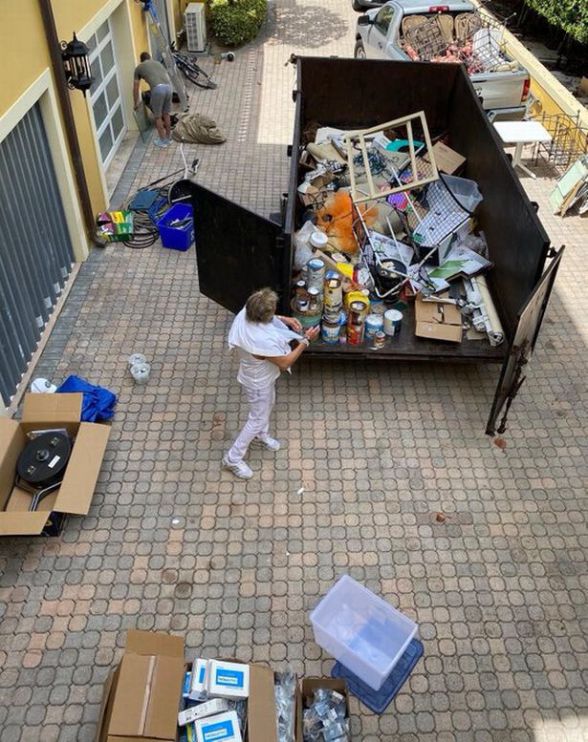 Sir Rod Stewart, 75, and his wife Penny Lancaster, 49, partied one final time with their friends ahead of months of isolation

The married couple partied on the tiles one final time for Penny’s 49th birthday with their gang of friends before their self-isolation commenced.

All citizens over the age of 70 must be quarantined from next weekend for the upcoming months as the UK government fights the pandemic.

Before their disappearing act, the lovebirds raised a toast of champagne with 16 of their closest pals for the special occasion.
Clad in glamorous ensembles, everyone looked carefree and happy as they smiled for the picture with their famous friends.

Penny was the belle of the ball in a satin scarlet dress which had a demure neckline and featured a decorative bow.

Rod was at the heart of the party as he was surrounded by his friends and raised a glass. 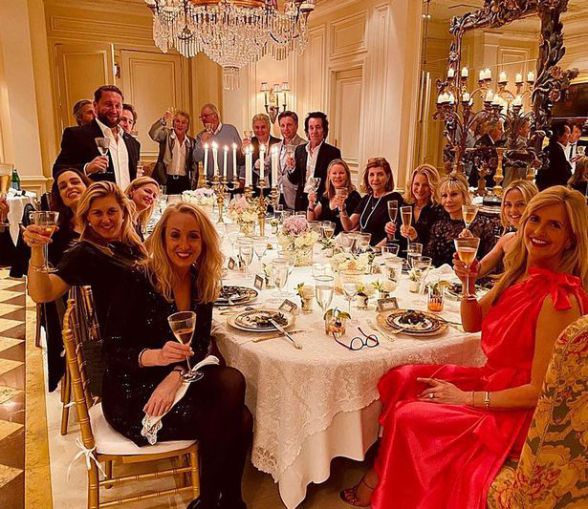 It was super flashy with a swish chandelier hanging from the ceiling, mirrors adorning the room and candles adding atmosphere.

The former model thanked her friends for braving the party one final time before the couple made their way home to the UK ahead of next weekend.

They have braced themselves for months of isolation in accordance with the UK’s new guidelines for citizens over 70 years old.

Rod Stewart is performing as scheduled this weekend, but tabling three shows next weekend at the Colosseum at Caesars Palace.

Stewart is rescheduling shows March 18, 20 and 21 at the venue where he has performed as a resident headliner since August 2011. Stewart returns for a series from Sept. 18-Oct. 3, and is expected to extend into his 10th year at Caesars in 2021. 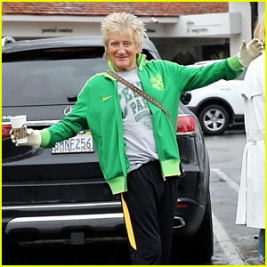 Rod Stewart is showing off his safety precautions.

The 75-year-old music superstar was spotted keeping safe and wearing gloves to pick up his coffee on a Starbucks run with his wife Penny Lancaster on Friday (March 13) in Bel Air, Calif.

Rod joins many different celebrities stepping out in various forms of protective gear – from gloves to face masks to hazmat suits – amid the ongoing coronavirus outbreak.

SIR Rod Stewart says he punched a guard in retaliation for touching him first at a New Year bash.

The singer, 75, and son Sean are charged with simple battery after hitting Jessie Dixon.

Sir Rod was given a trespass warning — in effect banning him from The Breakers resort in Palm Beach, Florida.

In a report seen by The Sun, police officer Stephen Mancino notes: “R Stewart stated after being denied access, he told Dixon he just wanted to show his children the inside of the event for ten minutes, but Dixon still refused.

“He stated Dixon became argumentative with his family, which in turn caused them to become agitated.

“R Stewart stated Dixon had touched him first and he had struck Dixon in retaliation.”

Employee Kaylyn Viteri said: “I saw Rod punch the guard in the chest. Then the wife (Penny Lancaster) or sister got in the middle trying to stop them.”

In his statement, Mr Dixon, 33, says of Sean, 39: “I put the back of my hand on the guy in my face and told him to back up to create some space. That’s when he shoved me yelling ‘What the f*** you gonna do’. Then the male in the gold jacket (Rod) punched me in the left rib.”

ROD STEWART - who is married to Penny Lancaster - has shared a rare video with his Nashville-based daughter Ruby Stewart in the wake of tornadoes which have affected the city of Tennessee.

Love and prayers to all our friends in Nashville today. #nashvillestrong pic.twitter.com/kW7gLJ2nmB

So far, tornadoes in Nashville have killed over 20 people and have left many more homeless. Yesterday, Sir Rod Stewart, 75, said his daughter Ruby Stewart, 32, was “fortunate” to have escaped the trauma.

“Our hearts are going out to you, I’ve lived their for five years now and I know the reason that I lived there is because it’s such a strong community.

“I know you guys have got this, keep strong and take care of one another.

“We are sending you all of our love and prayers,” she concluded as the pair blew a kiss to the camera.

The model also shared the video in view of her 24,000 Instagram followers with a lengthy statement.

Part of her post read: “There is no stronger city. I’ve traveled the world and I’ve always believed there is something the rest of the world could learn from you.

“It feels surreal to wake up on the west coast with this news, but know that my heart is with you.

“I am praying for those effected by this devastation and the lives lost.”

The blonde beauty went on to say her “doors are open” to anyone who needs shelter.