Forever Young! Rod Stewart looks dapper in white jeans and linen blazer as he steps out in New York with wife Penny He added a pop of color to his classic ensemble with a green paisley handkerchief. ALBANY – It was something of an odd-couple double-bill – Rod Stewart and Carlos Santana, two classic rockers who seem to have little in common other than their longevity, their devoted fan bases and the fact that they’ve each racked up a bunch of hits since kicking off their careers in the ’60s.

The tag-line for the co-headlining tour that launched at the Times Union Center on Friday night is: The voice (Stewart). The guitar. (Santana) The songs (Stewart and Santana). And the fairly-close-to-a-sold-out crowd certainly got all of that. But the musical mismatch was evident in the fact that the two stars collaborated on only one song during the three-and-a-half-hour concert – a surprisingly tame rendition of Etta James smoldering soul classic, “I’d Rather Go Blind,” during Stewart’s set. (Judging by the army of cellphone cameras that popped up during that performance, you can probably check out multiple videos of it on YouTube, even as you’re reading this.)

Looking sporty in a canary-yellow blazer and matching socks, Stewart and his 13-piece band romped right into his headlining set with “Infatuation,” at the end of which, for some reason, he was barking like a dog. The 69-year-old Stewart has had a varied career, and he touched on most of it from his rollicking days with the Faces (“Stay With Me”), through folk-rock (the show-closing “Maggie May”), his MTV days (“Hot Legs,” during which he kicked dozens of autographed soccer balls into the crowd), his R&B fascination (Sam Cooke’s “Havin’ a Party”) and sentimental if sometime schmaltzy love ballads (notably Van Morrison’s “Have I Told You Lately,” buoyed by a seven-piece string section of lovely local musicians). NOTE: He wisely avoided anything from his long love affair with the Great American Songbook.

His always raspy voice was surprisingly strong, although his best vocal performances were derailed: “Reason to Believe” by his mugging and clowning around, and the booming, anthemic “Forever Young” by an overly long drum solo (to cover for one of several costume changes). But a Stewart show is really about having fun, especially for Stewart himself. He doesn’t take himself too seriously, and by the time he dipped back to his disco days for the encore of “Do Ya Think I’m Sexy?” with a nod and a wink, he was sporting a straw cowboy hat amid a chorus-line of 19 musicians as dozens of balloons dropped from the rafters.

Carlos Santana and his 10-piece band featured several selections from his new Latin music album, “Corazon,” but like Stewart he also showcased the various twists and turns of his career time-line, focusing on the Woodstock-era Latin blues of the scorching “Black Magic Woman,” “Oye Como Va” and the percolating percussion duel of “Jingo,” as well as his 1999 Grammy-grabbing Latin pop blockbuster, “Supernatural” (“Maria Maria” and “Smooth,” featuring vocalists Andy Vargas and Tony Lindsay). And when he ripped into the encore of “Soul Sacrifice,” the band transformed it into a musical mash-up montage that included George Gershwin, the Specials, Ennio Morricone and the Police. 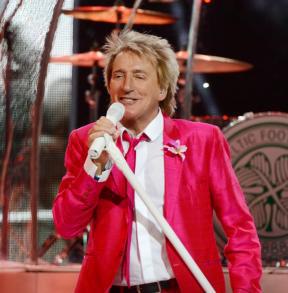 THERE are still tickets left for Rod Stewart’s open air concert at the County Ground, Taunton, on June 18.

He is a beloved family man as well as a veteran performer.

But Rod Stewart proved he had his priorities in order when he was seen enjoying quality time with his daughter Kimberley and her little girl, Delilah. Wearing an all-white ensemble with his trademark haircut, the singer looked youthful and summery as he stepped outwith a take-away coffee.

Clearly a style influence for his daughter, she followed suit - but in black, with leather boots and a designer handbag.

Meanwhile, Kimberley's adorable daughter was on trend in cute ankle boots and a comfy denim waistcoat. Together, the trio looked in fine form. The family of four recently enjoyed a day out together on Easter Sunday, in which Rod sported his all-white look.

Rod and Penny have always had a rock solid marriage, and the pair revealed that they keep it alive by going on frequent romantic breaks and by making love ‘three quality times a week’ Carlos Santana joined Rod Stewart on stage for “I’d Rather Go Blind” at The Colosseum at Caesars Palace in Las Vegas on May 6, 2014. This was their 1st time performing together on the heels of their US co-headlining tour (Photo: © Erik Kabik 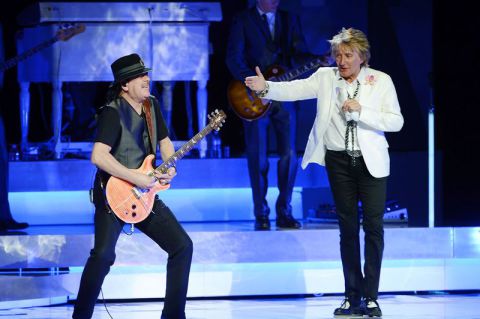 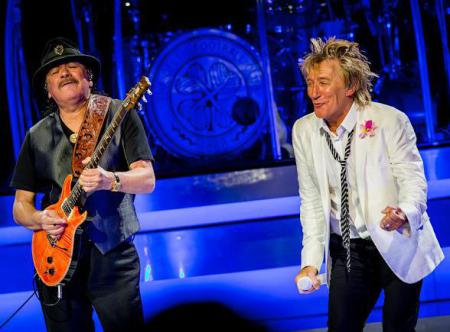 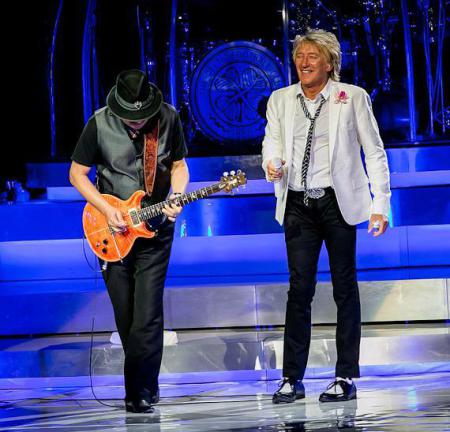 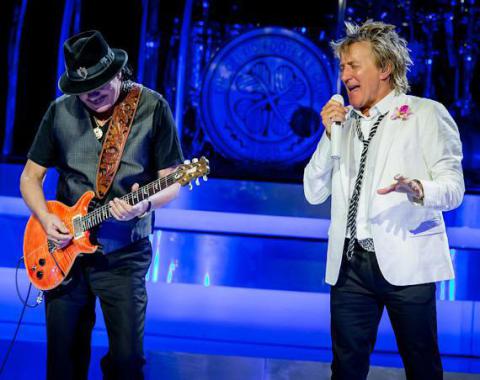 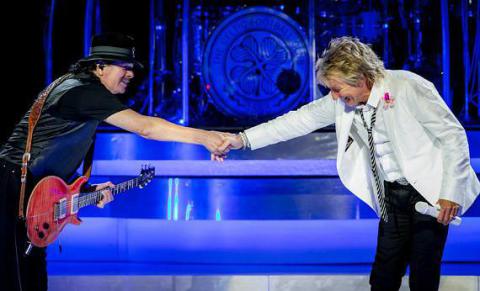 He may be a father of eight, but Rod Stewart still find time to bond with his only grandchild.

The 69-year-old rocker was seen grabbing a coffee with daughter Kimberly Stewart and two-year-old Delilah in Bel Air on Saturday, before they headed off to the local farmers market.

Leaving a Starbucks in the well-heeled neighbourhood, the trio were appropriately dressed for the California heat. He donned his favourite mirrored sunglasses, a silver chain and beaded bracelets on his right wrist.

Kimberly looked equally casual in a black top and trendy ripped shorts with the pockets hanging out teamed with a pair of cute black flats. Delilah is the result of a fling Kimberly enjoyed with Hollywood star Benicio Del Toro.

While Kimberly and Delilah's father never had a serious relationship, the socialite has always insisted he plays an important role in the tot's upbringing.

She previously said: 'Benicio's very involved; he and Delilah have a very special bond. She definitely looks like her dad, but she has my legs and eye colour.'

Rod meanwhile has been married to 43-year-old Penny Lancaster-Stewart for almost seven years. Penny is a model and photographer and is best known for her modeling work for designer lingerie brand Ultimo.

The couple began dating in 1999 and married in Portofino in 2007.They have two sons, Alastair, eight and Aiden, three. 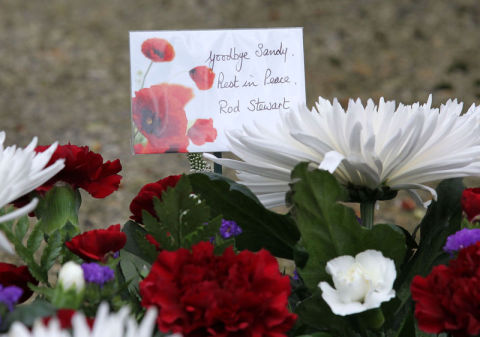