Rod’s 9-year-old son Alastair was looking sporty for the occasion in a green and white striped Nike Soccer shirt, white shorts and white Nike soccer shoes with red untied laces as he appeared to have recently left soccer practice. After leaving the toy store the 70-year-old singer revealed that despite him having an estimated net worth of approximately $235 Million, his son only had a $7 shopping allowance. Yes that’s right… $7. It seems that he is trying to have his son stay humble with his buying choices.

When Alastair was asked about his purchase he revealed that he had chosen not to spend his allowance and that he preferred to save it instead. Stewart went on to add that Alastair was in fact saving up to buy a Ferrari. Beginning in August, Stewart will be performing his greatest hits in The Colosseum venue at Caesars Palace in Las Vegas, Nevada. Backed by a 13-piece band he will be performing songs like “Maggie May”, “You Wear It Well”, “Do Ya Think I’m Sexy” and many more of his beloved hit records. The Grammy Award winning legend boasts an astounding 250 million album and single sales throughout his long and fruitful career and he is a two time Rock & Roll Hall Of Fame inductee.

Also accompanying them on the trip was Rod’s wife, 44-year-old former model Penny Lancaster who was walking behind the two sipping a coffee along with their youngest son Aiden who is four. The family then continued on down the sidewalk to their next shopping destination. Watch the video on here http://www.thehollywoodfix.com/entertainment/rod-stewart-takes-his-son-toy-shopping/

The twins (15) featured in The Extra recently as they released single Shout Out, in aid of mental health charity YoungMinds and in memory of a friend, Heather, who passed away last year. 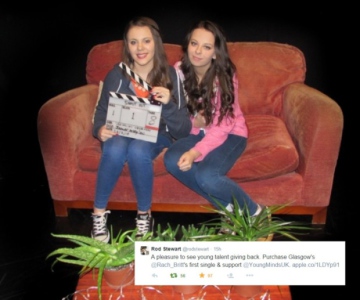 The Mearns Castle girls have been sending their song — and the video produced by the Royal Conservatoire of Scotland — to stars from all over the world.

And it was rocker Rod Stewart who replied, giving them a boost on Twitter by telling his 217,000 followers: “A pleasure to see young talent giving back. Purchase Glasgow’s @Rach_Britt’s first single and support @YoungMindsUK.”

Dad Derek told The Extra: “Robert Wishart, the girls’ vocal coach, got an email late last night saying Rod Stewart was going to tweet the song, backing Brittany and Rachelle and supporting their fundraising for YoungMinds.

“It was after 12 and we couldn’t wake them up — but at 7am this morning, when it came to the usual trying to get them up for school, they weren’t long in jumping out of bed.

“It’s not every day you hear from a megastar like Rod. It’s absolutely brilliant of him to even look at the video, and to tweet it.”

Speaking about Shout Out, songwriter Brittany commented: “If we can help just one person by releasing this song, all the hard work that has went into it will be worthwhile.”

The charity single is available on iTunes, Spotify and from online music stores.

Theirs is one of the strongest marriages in show business, and stepping out on Wednesday evening Rod Stewart and Penny Lancaster looked smitten ahead of a dinner date in Los Angeles.

The couple were hand in hand as they arrived at popular restaurant Bouchon, with statuesque Penny hard to miss by virtue of her incredible height.

Indeed, the leggy model towered over diminutive crooner Rod in her modest strappy heels shortly after arriving ahead of their evening meal 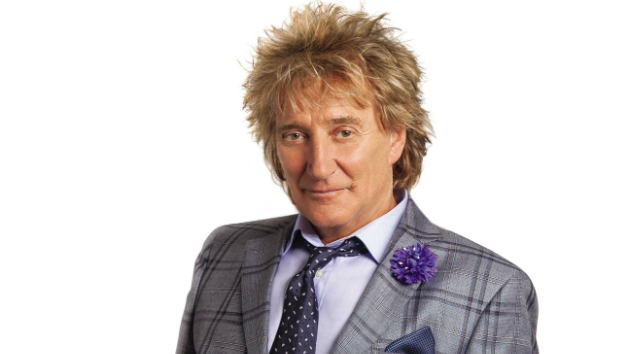 In 2013, Rod Stewart returned to the charts in a big way with his first album of original song in years, Time.  Still on a songwriting roll, the singer’s following that up with another new studio effort, due this fall.

AllAccess.com reports that at a presentation by Stewart’s label, Capitol Records, he spoke about the new set, which is called Another Country, and will be released in October.  Rod said of the project, “I’ve wondered about being in the armed forces, away from your sweetheart and your family…that must be heartbreaking…that is what Another Country is all about.”  At the event, Stewart also performed his new song, “Stay with Me Tonight.”

In November, the two-time Rock and Roll Hall of Famer told Vegas Player magazine that his new album would be released in the spring and would feature a lot of “Celtic melodies,”and that he’d also been experimenting with ska and reggae sounds.  It’s not clear if that’s what this new colection of tunes will actually sound like. 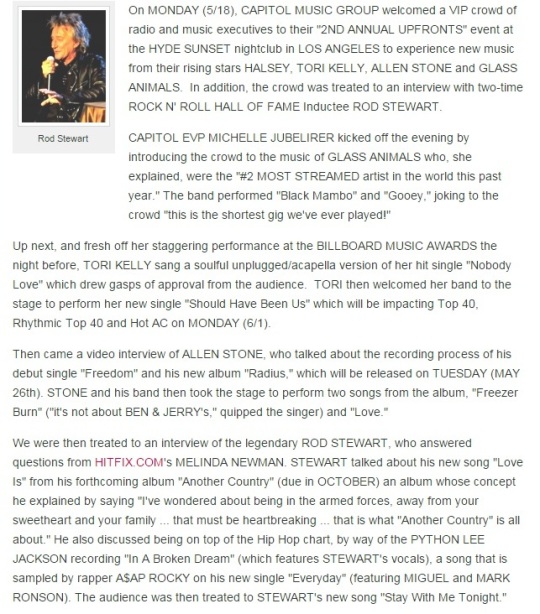 YOUR BID SUPPORTS SAY: The Stuttering Association for the Young

Rod Stewart has joked that with his new A$AP Rocky collaboration he will soon have more 'genres than children'.

Sydney's Python Lee Jackson formed in Sydney in 1965 and relocated to London in 1968. The Stewart vocal was recorded in 1968 but remained unreleased until after Stewart became famous as a solo artist. It was eventually released in 1972 just as Stewart was releasing 'You Wear It Well' and reached no 3 in the UK.

Stewart obviously liked the song. He has included it on two of his compilation albums. Now rapper A$AP Rocky has sampled the song on his new record 'Everyday'.

Stewart tweeted that he will have soon have 'more genres than children'. For the record, Rod Stewart has eight children. The oldest Sarah is 52. The youngest Aiden is four.

According to Stewart's tweet he has six genres including hip-hop but you can soon add another one . country. Rod Stewart add the new country chapter to his career with the album 'Another Country' due in October.

Tonight at his interview in Harlem for the Red Bull Music Academy Festival, A$AP Rocky shared a new track called "Everyday" that features Miguel, Rod Stewart, and Mark Ronson. Listen to it below, via Stereogum.

At the talk, Rocky also announced that his long awaited album At.Long.Last.A$AP will be released on June 2. 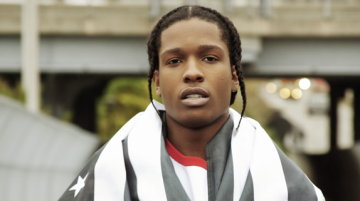 A$AP Rocky previously shared 'M'$' after debuting the song during a lecture in London.

At.Long.Last.A$AP will act as the follow-up to 2013's Long.Live.A$AP, which reached number seven in the UK and one in the US.

Even though Rod Stewart is credited as a feature, his contributions to the record are only sampled

She may be married to a world famous musician, but Penny Lancaster made sure she was in the spotlight during a family dinner with husband Rod Stewart on Friday.

The 44-year-old model wore a daring yellow mini dress for a meal out at Craig's in West Hollywood with Rod, 70, and his daughters Kimberly and Ruby.

While 35-year-old Kimberly and Ruby, 27 kept a low profile in dressed down looks, Penny went all out in her neon bright dress and towering heels which made the most of her long legs. The wrap number was paired with a classic black blazer and some statement shoes.

With a thick gold strap around her ankle, the black and metallic shoes featured a super high heel which meant the blonde was towering over her husband The couple, who have been married since 2007, dined with Rod's daughters Kimberly and Ruby.

Kimberly looked chic in smart black trousers and a loose blazer, hiding her face under a matching trilby hat, while Ruby also wore all black. 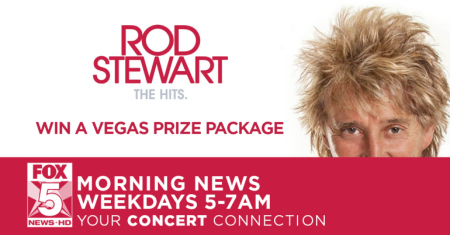 FOX 5 is giving away a trip to Las Vegas to see Rod Stewart in concert.

You can win a round-trip flight to Vegas on Southwest Airlines, a two-night stay at Caesars Palace and two tickets to see Rod Stewart live in concert at The Colosseum between July 31 and Aug. 16.

To enter, watch FOX 5 Morning News from 5 to 7 a.m. to hear which Rod Stewart song is played. It will be played only once. Then fill out the contest entry form by clicking on the link below. You must enter by  8 a.m. the day the song is played. Good luck!

Ronnie Wood: Faces reunion 'brilliant', but we won't do it for the money 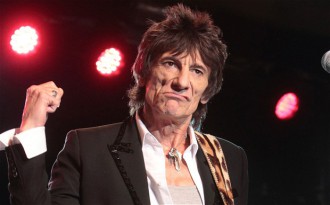 It is the moment fans have been waiting for: official confirmation of a Faces reunion nearly 50 years after the band formed.

And it appears a reunion between Ronnie Wood, Rod Stewart and Kenney Jones is one step closer to happening - if their management can agree on the finances.

Wood has said he thought a reunion tour between the three would be “brilliant”, after a one-off impromptu performance at Stewart’s 70th birthday.

But, he claimed, it was being held up by Stewart’s management, who had made “everything about money”.

Speaking at a public Q&A in front of fans, to publicise his new diaries, Wood said he wanted to simply “get together and play for people”.

The musician, who was joined on stage by DJ Bob Harris and his dog Dolly, told an audience at the Ambassadors Theatre in London he was keen to get the surviving members of the band back together after the death of Ian McLagan.

When asked if he would ever work with Rod Stewart and Kenney Jones again, he spoke about having to deal with Stewart's management.

"[They] make everything about money and we're trying not to do that," Wood said. "Why can't the three surviving guys from the Faces just get together and play for people?”

To cheers from the audience, he added: “That's what we want to try and do. I think that would be brilliant."

His words echo sentiments from Jones, who earlier this year said: “Rod, Woody and me are still going to do the Faces this year. It’s more important now than ever.”

The trio performed together earlier this year at a private party, before Stewart returned to his Las Vegas residency.

Speaking about his book, How Can It Be? A Rock and Roll Diary, Wood also shared his memories of the 1965 music scenes and thoughts on the current music industry.

When asked whether he felt something was "lacking" in today's bands and their sense of camaraderie on the way up, he said: "It is lacking I think.

"I feel sorry for some of the younger bands nowadays who suddenly have to be on the X Factor or something and don't have any breaking ground to cut their teeth.

"We had the gig wagon and rehearsing in a mate's garage, treading the boards and doing the circuit.

"But I don't know if new bands get exposed to as much of as as we did.

"Before us, the Beatles used to go over to Hamburg and play four sets a night, every night, and think nothing of it, and that's how they ended up with their style so tweaked."

A special edition of the book, his real-life diary from the year 1965, is out in June.

Rod Stewart’s management did not respond to requests for comment on Thursday.