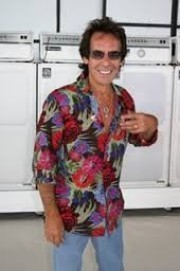 Hi Robin, here is a few questions I have put together for you. I would like to thank you on behalf of myself and everyone at RSFC for taking the time to answer them.

RSFC...  Who were your musical influences and can you tell me more about this ?

RLeM...  As a child they were Ella Fitzgerald, Louis Armstrong and jazz artists of the same ilk. Manly because of my parents influence. When I was older it was all the blues greats like Muddy Waters, John Lee Hooker then Hank Marvin and the likes of Jeff Beck and Peter Green.

RSFC..  In 1977 you played with Air Supply opening for Rod Stewart, was this your first tour in the US and when did you leave this band ?

RLeM...  It was my first US tour, and I was asked to stay with them but had to move to Australia to do so but wasn't prepared for that.

RSFC...  In 1995 you teamed up with ex Rod band mate’s Jim Cregan and Bernie Taupin to form the band “Farm Dogs” how did that go and how many albums were released ?

RLeM...  It's still one of the best times, writing and recording those records was such a pleasure. They were both done at his ranch in Santa Ynez California. We did two tours to promote each album which were great. Lots of fine wines and tequilas.

RSFC...  From 1981-1986 you were a key member of the Rod Stewart Group where you did a lot of touring and recording can you tell you tell our members what it was like working with Rod at that time ?

RLeM...  I think "can't remember" says it all! But really another wonderful time, writing and recording mostly at the Record Plant in LA. And the tours were like going on holiday to fabulous locations with your best friends and doing a few shows a week as a bonus.

RSFC...  Are there any funny moments that you remember and would you like to share them with us?

RLeM...There are too many to tell you about. Here's one.....At one point during an American tour Rod was doing an interview with Dick Clark, (an American institution in broadcasting), and for some reason we decided to buy a dozen live chickens to be released into the suite during the taping. The timing was perfect, just as the interview was being wrapped up we burst in and let them out of the boxes. Mayhem insured, feathers and chicken shit was everywhere, and the whole thing was on tape too.

RSFC...  Do you remember the best gig you played at and can you tell me what song you liked playing live ?

RLeM...  There were so many with Rod, but for me, probably Earls Court. Because that's where I grew up. I could see the building from our kitchen window growing up and wondered if I would ever play there. So, when we did it was the best feeling. My mum had died by then but my dad was there. One of my favourite songs to play live is Every Picture.

RSFC...  During that time when you were with the Rod Stewart Group you co-wrote a lot of songs can you tell me what songs you wrote with Rod?

RLeM...  Someone asked me that the other day and I could not remember them all.

RSFC...  In 2004 you re-joined Rod’s band for the Songbook Tour how did this come about after such a lengthy time away ?

RLeM...  That was great. I joined because Jeff Golub couldn't do it. Rod asked and I said sure. Loads of fun again, kind of like putting on a comfortable suit you haven't worn for ages.

RSFC...  How did you find Rod’s audiences compared to other artists/bands you have worked with ?

RLeM...  It's simple really. The audience comes to see the artist or group that they've payed their hard earned money to see so they are all on your side.

RSFC...  Were there any crowd that you preferred playing in front of ?

RLeM...  Any crowd that is good looking LOL. And any crowd that really appreciates what you are giving to them.

RSFC...  I read somewhere that you were working on a project with Rod's daughter Ruby, can you tell me more about this and do you think Ruby has inherited her fathers talent as a singer ?

RLeM...  I did do a little writing with her, but my schedule got crazy and had to do other things. But, Ruby has a great voice and I expect her to do fabulous things.

RSFC...  Are there any other musical instruments you play besides guitar?

RLeM...  No not really. I sometimes play a keyboard for different ideas.

RSFC...  If you hadn't become a musician what do you think you would be doing now ?

RSFC...  Recently you got together with Jim Cregan and Gary Grainger to form 'Apart from Rod' would you like to tell me about more about this ?

RLeM...  It's a blast playing all those songs that we are all so familiar with. The band is great. And we have one of the best rhythm sections I've ever been involved with. And, they are a lovely bunch of guys.

RSFC...  You have a tour scheduled with Johnny Hallyday soon. Are you in rehersals at the moment for this tour ?

RLeM...The next JH tour won't be 'till 2012. But we start rehearsing for a major tv show in Paris at the beginning of March, sadly I won't be able to make the RSFC Big Weekend because I'll be in LA.