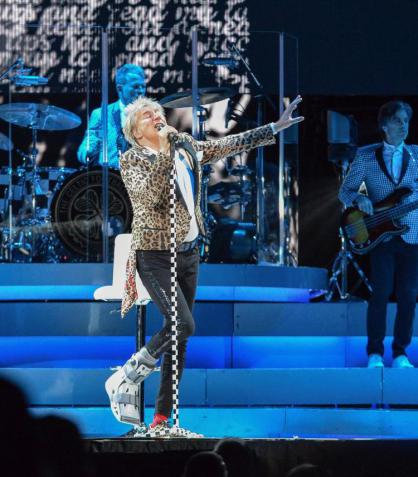 I can’t imagine it’s too hard to find your mojo when you’re entertaining 20,000 people at a legendary venue like Madison Square Garden or the Hollywood Bowl. Or when you’re singing in front of royalty or a room filled with “important people.” But the real test of a pro is how you perform in front of half as many people in a smaller city in a sparsely populated state in a country that just ignored your latest album—oh and let’s set the bar a little higher—or lower—and see how you do with a busted foot.

The temptation to phone it in—get it the hell over with quickly and back on the jet--or even better yet, cancel altogether--would have to be extremely tempting—unless you are absolutely dedicated to your craft. Rod Stewart’s performance Friday, Oct 26, in Billings, the only Montana appearance in his 50-year career—proved that is an absolute master of the spotlight game and second to none in his desire to make people happy, regardless of size, location or status. His performance was nothing short of inspiring as he tore into his usual set list with as much as gusto and enthusiasm as I have ever seen--and I ‘ve been watching for 42 years. With his right foot in a cast, Stewart still looked a decade younger than his 73 years as he attempted to swing, twist, dance and make eye contact with each member of his audience. (Somehow he seems to do this….I have no idea how….)

Sir Rod hobbled out from the wings at precisely 7:32 p.m. (very un-rock and roll to be on time but the man is 73—bedtime was likely calling!) to the opening bars of his 1984 top tenner “Infatuation.” Before he sang a single note, a bemused, grinning Stewart told the crowd over the guitar riff “I broke me foot!”  He then bellowed “Early in the morning I can’t sleep” and of course the crowd went wild at the sound of one of rock’s most beloved voices. From there it was serious monkey business as usual as Rod tore through the hits and a few solid album tracks as he charmed and easily won over my hometown audience. I may not be royalty, but I am a life-long fan who has spent way too much time and money on Stewart’s career. Like many of you reading, I am known to family and friends as the biggest Stewart fan in the world. Rod Stewart performs every night as if he knows his biggest fan in the world is in the audience.

To see Rod in the city where I was born and raised—and where rock stars rarely ventured as I was growing up, was indeed special. Though this was my 16th Rod Stewart show this one held a bit more meaning as this was the town where I first bought Footloose & Fancy Free so many decades ago at the age of 13. The place where I drove family and friends (many of whom were in attendance) crazy by constantly blaring Stewart’s latest from whatever device I could find. For some reason that perhaps only Freud could explain, I often had dreams in which Rod played my hometown and no one but me showed up! This was not the case as nearly 10,000 people packed into see Roderick. I have no idea where any of these people were when I was growing up and catching flack for being the state’s biggest Rod Stewart fan!

Highlights of the show included a soulful rendition of “I’d Rather Go Blind,” “People Get Ready” and a blistering versions of “Hole in My Heart” and “Rollin’ and Tumblin” from his excellent new album Blood Red Roses. From my vantage point the crowd seemed to love it, despite Rod promising to get the new songs “over as soon as possible.” (I’ve no clue how to sell albums, but I am pretty sure such a negative intro isn’t the way to do it.) This is a good time to pass on some advice to my fellow Rod fans—if within shouting distance of Mr. Stewart, be sure not to let Rod know how great his new album is when he’s talking or he will tell you to “Shut up, I’m talking.”   (Note to singer: Thanks a lot, Rod. Now every time my wife and I are disagreeing, she says, “Rod Stewart is right. You should shut up.”)

Personally I very much missed “Didn’t I” and “Grace” from Roses but any Rod Stewart fan outside of the U.K. knows you aren’t going to get too much new from Rod Stewart in concert. This is unfortunate since the last three albums have produced a wealth of new gems that would no doubt sound great live.

But back to what was. As we all know, Rod is still sporting the enormous, somewhat superfluous, band. Though each member appears to be gloriously talented, Rod could get away with halfing this bunch and still put on an excellent rock show. When you’re hiring people like Emerson Swinford (the best guitarist of Rod’s solo career, with apologies to the late Jeff Golub), Kevin Savigar, J’Anna Jacoby and David Palmer, and you possess the charisma and vocal talent of Rod Stewart, I’m pretty sure you don’t need a harpist,  an extra percussionist and three back up vocalists…but hey—maybe it adds to the post-tour parties!

Rod nation knows Stewart lives to play to an audience and I have to wonder if there is any better proof than the enormous smile that graced his face for the entire 110-minutes he was on stage in my hometown. And if anyone needs any proof that Rod Stewart is a consummate showman with an old-school hard-work ethic, they can point to this show—and dozens like them all over the U.S. over the past 20 years. He may have found his pot of gold decades ago but he’s still working the miracle mile. Long Live Sir Rod. 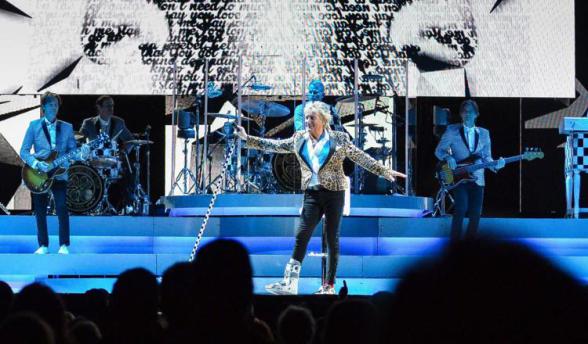