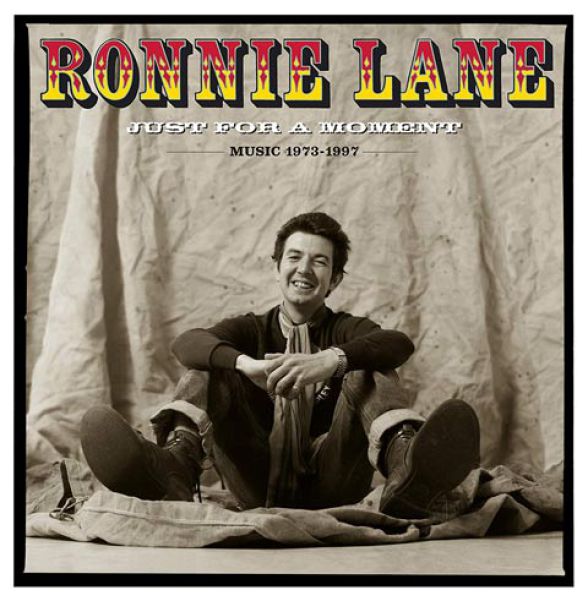 Just For A Moment: Music 1973-1997 is a forthcoming six-CD box set that focuses on the solo career of Faces/Small Faces legend Ronnie Lane.

The box includes Ronnie’s four solo albums – Anymore For Anymore (1974), Ronnie Lane’s Slim Chance (1975), One For the Road (1976) and See Me (1979). Each of these four CDs have bonus tracks including singles, B-sides, alternates and tracks from Ronnie’s Mahoney’s Last Stand album with Ron Wood and Rough Mix with Pete Townshend.

CD 5 features highlights from a Rockpalast concert along with various sessions and rarities while the final disc offers more rare and unheard material focusing on Ronnie’s time in the US with live highlights and studio tracks never previously released. 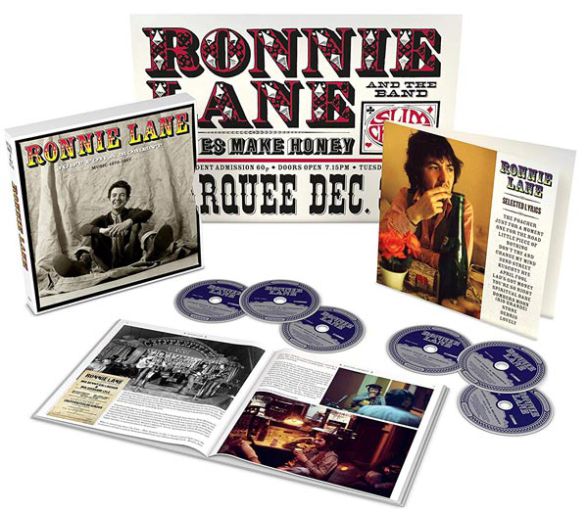 The set is curated by longtime musical associate of Ronnie’s, Charlie Hart and sleeve notes are in three parts, handled by a trio of writers: Paolo Hewitt, Kris Needs and Kent Benjamin.

In terms of packaging, the six discs are housed in a hardcover book which slides into outer slipcase. Additionally, it comes with a book of Ronnie’s lyrics and an A2 fold-out poster. 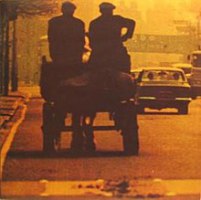 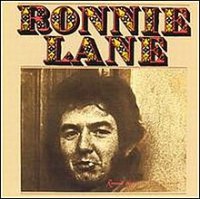 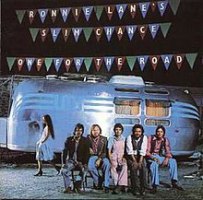 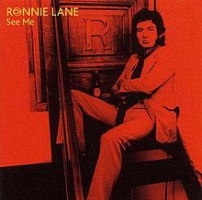 Just For A Moment (The Best Of) single CD set

Loved so much by everybody and so sadly missed by all.
God Bless Ronnie Lane.

From the vaults of Carl Meyer, an original album review written in June 1980.*

What a long, strange trip it’s been.  All the way from Small Faces through Rod Stewart & Faces to Slim Chance and beyond.  Ronnie Lane chose the gypsy life and left the rock’n’roll circus behind.  He transformed into a  wandering minstrel, taking his music, musicians, barkers, tents and family with him on a raggle-taggle convoy of painted wagons and rickety old vehicles through Britain, delivering roots music of a very special kind.  Bob Dylan copied his carnival-concept a year later with the Rolling Thunder Revue, but Ronnie Lane did it first and almost went bankrupt on the way 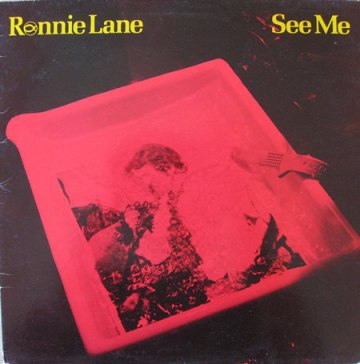 “See Me” is his first LP since 1976 (not counting “Rough Mix”, which he made with Pete Townshend in 1977).  It is not a Slim Chance-album, but he has kept some of the musicians from that loose concept of a band.  There are big shots here as well, like Eric Clapton, Ian Stewart, Henry McCullough and Mel Collins.

The music is gorgeous as always.  An acoustic vanguard of guitars, mandolin and fiddle - with the support of organ, piano, accordion and saxophone.  Lane’s voice makes everything shine.  It’s nasal and croaky, but also wonderfully sensitive, like a rusty heartache with a warm, melancholy smile on its face.  The voice soars over fields and meadows, through tiny villages and urban alleys.  Tin Pan Alley in the 1920’s, blues from the gutter and rural British folk.  Wistful, soothing

“See Me” is definitely not the sound of the 80’s, it’s something so much greater than that as Ronnie Lanes has a rare gift of making the past relevant, and turning it into a strong case for the future.  Timeless music, that’s what it is, and it’s good for you.  Trust me 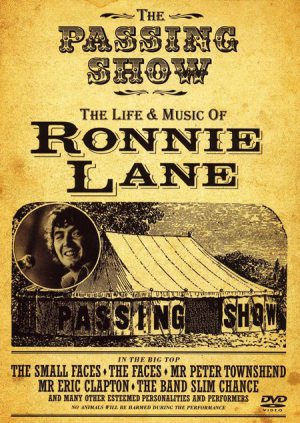 I didn’t know Ronnie was ill (by multiple scleroses) when I originally wrote this review and that this would be the last album he ever released.  I always loved the man and had the privilege of meeting him, both in Norway in 1975 and in his London apartment in 1983.  Please check out “The Passing Show – The Life And Music Of Ronnie Lane”, a wonderful BBC-documentary from 2006.  It’s available on DVD and can also be viewed in several parts on You Tube.

Ronnie Lane was so much more than just the bass player in the Small Faces and Faces. He was, in many ways, the heart and soul of both bands. Just ask the band members themselves. Not only was he brilliant on bass, but his songwriting skills were incredible, and his warm inviting voice shone bright through the Faces days and well beyond. 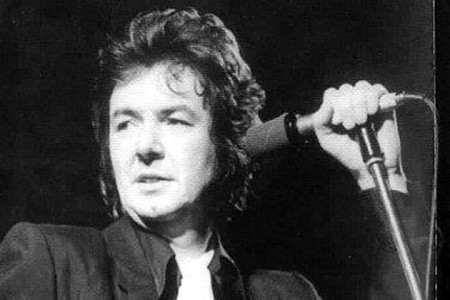 "Short and sweet" is how Ian McLagan, fellow member of the Small Faces, remembers his old friend Ronnie Lane, the bass player and singer who co-wrote some of the group's greatest hits.

Lane was indeed one of the funniest, sweetest and most entertaining personalities in a music business not noted for its humility. Not that Ronnie "Plonk" Lane was ever humble. He just couldn't take pretentious rock attitudes seriously. He was a man whose eyes crinkled up when he laughed, and whose tiny frame shook when tears of mirth poured down his cheeks.

Lane partnered Steve Marriott in the Small Faces, the band of East End mods formed in 1964, who created such classic hits as "All Or Nothing", "Lazy Sunday" and "Itchycoo Park". While Marriott unleashed the fire and the restless energy, Lane was his trusty sidekick who provided the Cockney humour and love of word-play. Between them they made a great team, laughing and yelling their way through the Sixties with boundless energy. When Marriott quit the group in 1969 to form Humble Pie, Lane teamed up with Ian McLagan on keyboards and the drummer Kenny Jones to form the Faces with Rod Stewart.

Their bar-room rock formula was a hit with songs like "Stay With Me", and the Faces toured successfully for some years until Lane, tired of the champagne lifestyle, finally took the plunge to go solo. He left Stewart, formed his own more down-to-earth group Slim Chance and took the band out on the road in a rock'n'roll circus called the Passing Show. They moved from town to town playing under a huge marquee, employing jugglers, acrobats and what Lane eventually dubbed "the world's unfunniest clowns."

Lane enjoyed two chart hits with "How Come" and "The Poacher" in 1974, and invested in his own mobile studio which he located on a farm on the Welsh borders. He even studied agriculture and planned to be a farmer. His excellent folk-flavoured band included Benny Gallagher and Graham Lyle, and Lane sang lead vocals in a style that was closer to Bob Dylan than Steve Marriott. He released a selection of warm, pleasantly low-key albums including Anymore For Anymore (1973), Ronnie Lane's Slim Chance (1974), and One For The Road (1975). The latter featured a superb panoramic photograph of Lane's farmhouse surrounded by a cavalcade of buses, caravans and trucks, with the diminutive Lane waving from the foot of a hill.

Lane loved touring, but the idyllic concept of the Passing Show eventually ground to a halt, stymied by bureaucracy and rising costs. Lane lost a fortune, and underwent two divorces which resulted in him becoming estranged from his children. But he never lost his love of playing his favourite kind of good-time music. The one-time mod who had relinquished his Carnaby Street look in favour of a beard, neckerchief and waistcoat was always a bit of a gypsy.

He was born in 1946 in East London. Kenny Jones knew him from the time he left school and was working as a plumber's mate to pay for his guitar. "We got together and started a band called the Outcasts." When Lane decided to switch from guitar to bass he and Jones went to a local music shop in search of a new instrument. "This cocky little guy served us and he turned out to be Steve Marriott," recalled Jones.

The pair invited Marriott to a pub gig that night and when he got up on stage he jumped all over the pub's piano, breaking the keys. "The landlord threw us out, the group broke up and we ended up with just me, Ronnie and Steve sitting on our equipment on the pavement. We looked at each other and burst out laughing, and that was the birth of the Small Faces. If I hadn't met Ronnie Lane first the band wouldn't have happened."

The Small Faces got caught up in the whirlwind of the Swinging Sixties and Lane enjoyed his share of drink, drugs and mayhem. But he was always quieter, more sensitive and less aggressive than Marriott. He developed a genuine interest in Eastern mysticism. But when the band found that he had set up a shrine in his dressing-room with a peach and a scroll, as Marriott later stated: "We ate the peach and burnt the scroll!"

Lane also studied the teachings of Indian mystic Meher Baba and shared his interest with Pete Townshend of the Who. The pair recorded a well- received album together called Rough Mix (1977), written in the spirit of Baba, which included a performance of Don Williams's "Till The Rivers All Run Dry". This effort was followed by one more solo Lane album See Me (1979), which featured such tunes as the jolly "One Step", and "Kuschty Rye".

But Lane was unable to develop his musical career any further, having developed multiple sclerosis. He was first diagnosed in 1977 when he showed loss of muscle control. Jones described how: "He seemed very forgetful, slurred his words and tripped up a lot. We accused of him of being drunk and of having a secret tipple, but he wasn't of course."

Lane had dreaded for some time that he might be susceptible to MS as his mother suffered from the same disease. Jones and Lane used to carry her up and down the stairs at the block of flats she lived in in the East End. Tragically Lane had to suffer for many years before he died. When Jones telephoned Lane up and told him that Marriott had died in a fire at his Essex home, in 1991, "the first thing he said was: 'I'm jealous.' He meant that."

Having lost most of the money he earned with the Faces, Lane found himself not only broke but unable to earn a living. Several attempts were made to raise money for him. In 1983 a special charity concert was held at the Royal Albert Hall in London, which featured Eric Clapton, Jeff Beck, Jimmy Page and members of the Rolling Stones. Lane asked that some of the money raised be donated to research, to find a cure for MS, and Action Research For Multiple Sclerosis (Arms) was formed. The Arms concert was a big success and the whole package later toured America. Lane himself appeared and sang a moving version of "Goodnight Irene". Jones made continuing efforts to raise more money to pay for his treatment, and battled to get Lane royalties from past Small Faces records.

In 1996 he organised a special tribute album, A Tribute to the Small Faces: long agos and worlds apart, starring Paul Weller, Primal Scream, the Buzzcocks and Ocean Colour Scene which raised pounds 50,000 for Lane who was by now living in poverty in Austin, Texas with a nurse who later became his wife. He moved to Colorado in search of a better climate but was soon confined to a wheelchair. His condition deteriorated to the point where he was unable to speak or move. He tried many different treatments including homeopathy and even injections of snake bite venom. He used to joke to friends who asked how the treatment was going, "Well a mosquito bit me this morning - and it died." 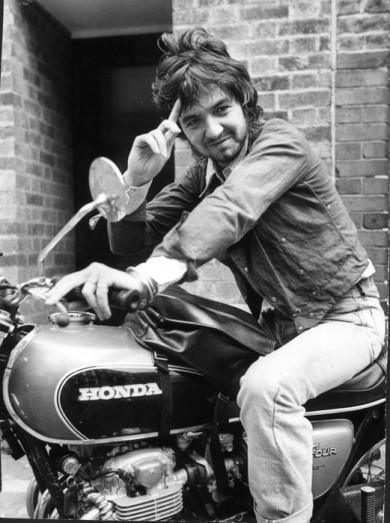 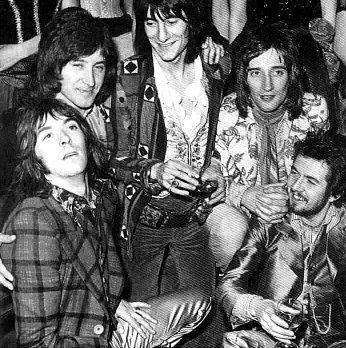 Many years ago I found this photo on the web and emailed a copy of it to Mac. He told me this was taken on the night, in Chicago, that Ronnie announced he was leaving the Faces.

Watch this space for much more about Ronnie and his great music after the Faces.

The Passing Show - a SUPERB documentary by my friend Rupe Williams.

I was one of the lucky few that saw the legendary Passing Show. I went to one of the performances at Chester Racecourse. Hope you don't mind me posting the documentary here Rupe. Folks, it's available to buy on Amazon etc and is well worth owning. 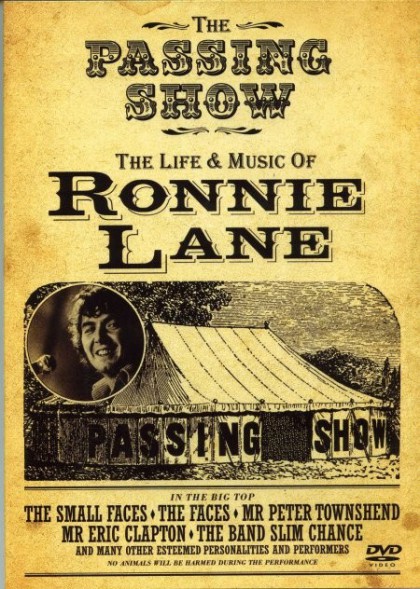 Watch some beautiful performances by Ronnie here.....so loved and sadly missed..."God Bless Us All"