Rod Stewart put on an energetic display as he danced across the stage while performing in Toronto, Ontario, on Tuesday evening.

The singer, 77, put on a suave display in a dazzling silver suit as he showed off his dance moves on the Budweiser Stage.

His glittering metallic suit was made up of patterned trousers and a matching blazer, and a crisp white shirt adorned with embroidered flames. Rod completed his eye-catching outfit with a pair of sparkling silver trainers, while he wore his silver locks in his signature spiked style.

The rock star was seen belting out his popular hits and energetically dancing across the stage as he visited Toronto as part of his US tour.

Rod Stewart, 77, dazzles in a silver suit as he energetically dances across the stage during incredible Toronto show

Rod Stewart, 77, looks dapper in a blue and white checked suit as he enjoys a romantic stroll with his chic wife Penny Lancaster, 51, in London Sir Rod Stewart cut a dapper figure as he stepped out with wife Penny Lancaster in London on Saturday.

The rocker, 77, wore a blue and white checked suit and added a splash of colour by wearing a magenta handkerchief in his pocket.

Musician Sir Rod wore a white shirt open at the collar and a fedora hat with a black black band. 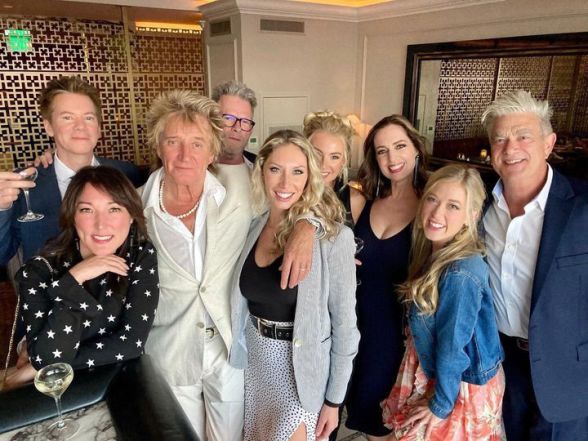