'Family time!' Sir Rod Stewart is joined by wife Penny Lancaster, six of his EIGHT children and his young granddaughter for a festive photo

Sir Rod Stewart got into the festive spirit on Thursday as he shared an Instagram snap of himself alongside his six children, his granddaughter and model wife Penny Lancaster.

The legendary singer, 77, and his loved ones dressed to impress for the evening as they posed with their arms wrapped around one another in front of an enormous Christmas tree. Rod took some time out from his UK tour at the weekend to enjoy the wintry weather with some friends and wife Penny Lancaster. 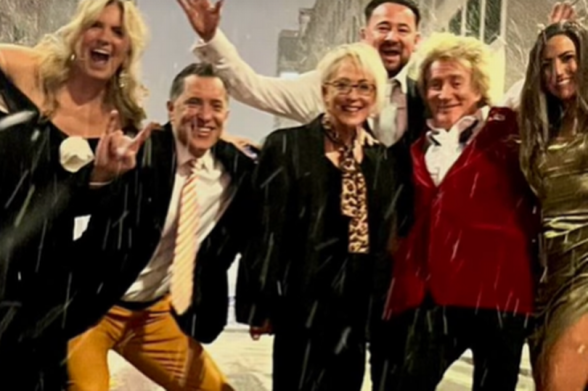 Rod Stewart has been enjoying the snow with Penny Lancaster and friends in London.

The Maggie May singer posed alongside his wife Penny, 51, for a snap alongside friends enjoying the winter weather. Sharing the happy snap to her 163,000 followers, Loose Women panellist Penny accompanied the photo with Rod's rendition of 'Let It Snow'.

The mother of-two also shared a video of the snow as she drove through the Royal Exchange in London. Hoops-daft Rod has been continuing his UK tour, after performing in Birmingham on Saturday night.

Rod Stewart put on a brave face as he made his first public outing since announcing the death of his brother and 'irreplaceable buddy' Bob.

The singer, 77, enjoyed a night out at The Pig pub in Chelsea with Penny Lancaster, 51, and her niece Raphaella, 18, on Thursday.

The Sailing hitmaker stayed close to his beloved wife, cuddling up to her as they were spotted leaving the swanky London pub. Ahead of his pub visit Rob took to Instagram to pay tribute to his brother as well as his eldest sibling Don, who also tragically passed away two months prior.

He shared a black and white throwback picture of the trio in their childhood playing a game of football.

He captioned the snap : 'When footballers were footballers. RIP Don and Bob.' Describing his late siblings as 'irreplaceable buddies', Rod said he has 'lost two of my best mates in the space of two months' as Bob 'joins Don on the great football pitch in the sky'.

Sir Rod wrote in tribute: 'It's with great sadness that I announce the loss of my brother Bob last night, who joins my brother Don on the great football pitch in the sky.