Rod Stewart and his wife Penny Lancaster were the ultimate proud parents on Sunday, when they supported their youngest son Aiden during football practice.

The rocker, 75, and model Penny, 49, were seen cheering on their nine-year-old offspring as he joined his youth team on the pitch in Hertfordshire.

Maggie May hitmaker Rod showed his life-long allegiance to the Celtic FC, donning a grey hoodie emblazoned with the team’s name, as he helped coach the team.

Teaming his top with a pair of black tracksuit bottoms, the star laughed and chatted with his wife of 13 years in between catching all the action on the field.

For her part, Penny looked casually cool in a white T-shirt and skinny jeans, which she teamed with an oatmeal cardigan and white running shoes.

With her taupe handbag resting at her waist, the mother-of-two styled her flaxen locks in soft waves, while she kept her makeup light and natural

Shielding her eyes with a pair of stylish sunglasses, the TV personality cheered on her adorable offspring, who looked smart in his green and white football kit.

Penny Lancaster, 49, puts on a leggy display in a floral mini dress as she enjoys dinner with rocker husband Rod Stewart, 75, in London

They recently spent some quality time together in Venice.

And Penny Lancaster looked sensational as she marked her return to the UK with a trip to Zuma in London with her husband Rod Stewart.

The beauty, 49, put on a very leggy display as she donned a stylish floral mini dress for the dinner out on Saturday night. Stunning: Penny Lancaster looked sensational in a floral mini dress as she enjoyed dinner at Zuma in London with her husband Rod Stewart on Saturday night

Penny exuded glamour as she wore her long blonde locks down and let them cascade over her shoulders.

She added some extra height to her frame with a pair of blush pink heels and let her long sleeved dress do all the talking by keeping her accessories to a minimum. Meanwhile Rod also dressed up for the trip to the high-end Modern Japanese restaurant, rocking a white suit and patterned shirt.

The couple also appeared to be joined by one of their sons, who smiled for a snap alongside Rod in their white leather interior car. We were graced with a touch of showbiz royalty at @BTFC @BTFC_COLTS last night as @rodstewart and Penny Lancaster were in attendance to watch their youngest son play for Bishops Stortford against @Jaygreen24 's U'10's. Rod and Penny were so nice and posed for photo's galore. pic.twitter.com/WMmsHFyoMV 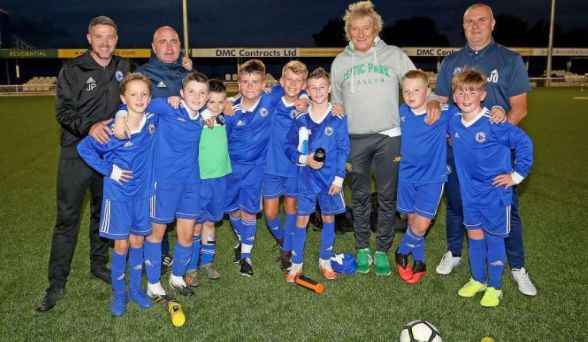 The day Rod rocked up at Billericay

Billericay Town welcomed rock royalty to New Lodge on Friday evening when Sir Rod Stewart and his model wife, Penny Lancaster, were amongst the crowd to see the Blues under 10’s take on their Bishop’s Stortford counterparts.

The couple attended the match against Jay Green’s side to watch their youngest son, Aiden, in action for the visitors. Rod – a huge fan of Scottish champions, Celtic – and Penny posed for photographs and were happy to chat with fellow football enthusiasts.

“He was extremely impressed with our facilities and thought the clubs’ set-up was excellent, what with the large number of teams featuring women’s, men’s and youth footballers.

McCartney added: “Rod commented on our pathway opportunities and what we are doing for the community. He said he’d try to come back in the near future.”