Penny, 47, looked chic in a white shift dress which she paired with gold embellished sandals.

Also joining them for the family snap was the singer's granddaughter Delilah Del Toro, seven, whose mother is Rod's daughter Kimberly Stewart, 39.

He's been enjoying the winter sunshine on a festive family break to Palm Beach, Florida.

And Rod Stewart's wife Penny Lancaster took to Instagram on Sunday to share a sweet snap complete with four of the rock star's children.

The Maggie May hitmaker, 77,  looked relaxed in a white shirt with quirky stripe trousers which he teamed with crisp white trainers.

And goodwill to all!

"He loved our bacon sandwiches" 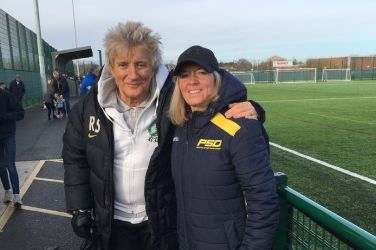 Veteran rocker Rod Stewart hit all the right notes with staff at Haverhill Rovers FC yesterday (December 17) when he turned up out the blue for a junior football match.

The legendary ladies' man, who has a string of hits going back some six decades, has always been a football fan and is a big supporter of both Celtic FC and the Scottish national side.

But it was at the less celebrated surroundings of The New Croft in Haverhill's Chalkstone Way where Rod the Mod got his footie fix this weekend, watching the town's ETA U13 team take on Harlow's ETA U13s.

"Rod told us he was here supporting a family member playing for Harlow," said Peter Betts, facilities and football development manager at The New Croft.

"He was very friendly and approachable and was more than happy to pose for photographs. He also loved our bacon sandwiches, and the catering ladies said he was really nice. 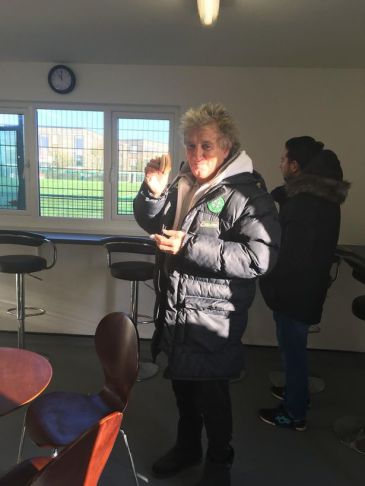 "There were no airs and graces about him, no bodyguards or stretch limousines. He just turned up, watched the match and then went again without any fuss. 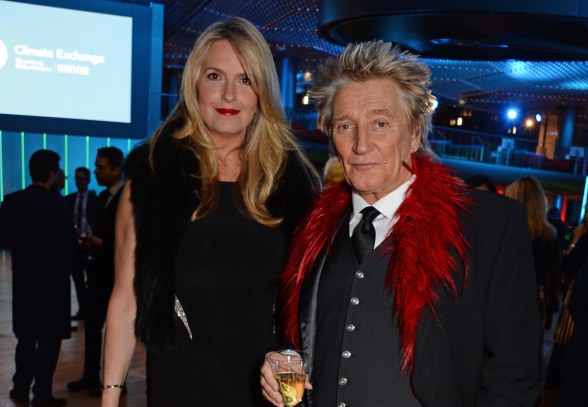 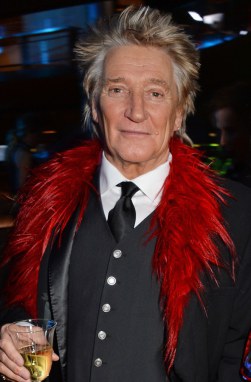 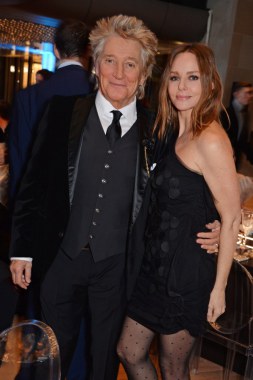 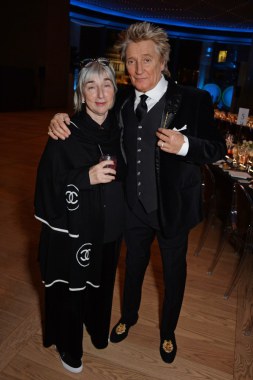 They are one of the showbusiness world's strongest couples who tied the knot in 2007.

And Rod Stewart and Penny Lancaster looked smitten as they enjoyed a dinner date at London eaterie Scott's restaurant on Tuesday.

The iconic singer, 73, and his model wife, 47, cracked identical smiles as they strolled out of the restaurant after an evening of quality time together. He wrapped up in a navy silk scarf, and covered his eyes with dark aviators

His blonde locks were styled in trendy spikes.

Penny took a walk on the wild side in a leopard print dress  which flashed a hint of her toned legs, boosting her height with knee-high leather boots. Stroll: The iconic singer, 73, and his model wife, 47, cracked identical smiles as they strolled out of the restaurant after an evening of quality time together

She teamed this with a black three-quarter length coat and a orange quilted bag.

Her caramel tresses were styled in loose waves while her pretty features were enhanced with a light dusting of make-up.

Their appearance comes after Penny revealed she has piled on two stone since having children.

The 47-year-old former model put on a stylish display in the coat with a fashionably faux fur collar, as she joined her 73-year-old spouse leaving the bash in the heart of London's Mayfair.

The couple were joined by numerous other stars arriving for the part, including Elizabeth Hurley, Ronan and Storm Keating, and Simon Le Bon's wife Yasmin. Penny was showing off her chic fashion sense as she wrapped up against the chilly December climes, teaming a cosy cream jumper with a taupe silk midi skirt.

The mother-of-two then covered up with a cream-coloured coat with a cosy matching faux fur collar, adding some extra sparkle with silver heels.

Carrying her essentials in a small silver clutch, Penny finished her ensemble with with her blonde tresses in voluminous waves. Nice and warm: Penny, 47, was showing off her chic fashion sense as she wrapped up against the chilly December climes, teaming a cosy cream jumper with a taupe silk midi skirt Looking sharp: Meanwhile Rod, 73, was dapper in a black suit and trench coat, but added a quirky twist with red and leopard print brogue shoes Meanwhile Rod was putting on a dapper display in a simple black suit and trench coat, but added a quirky twist in the form of red and leopard print brogues.

Rod Stewart and wife Penny Lancaster 'nearly SPLIT over his secret tryst with supermodel Caprice'... before she told him 'it's me or her'

Rod Stewart and Penny Lancaster allegedly nearly called it quits because he was dating supermodel Caprice Bourret at the same time.

Following his split from his first wife Rachel Hunter, Rod, 73, began dating both Caprice and Penny in the summer of 1999.

However Penny, 47, gave Rod an ultimatum and told him 'it's me or her', during the early months of their relationship, reports the Sun. Love triangle: Rod Stewart and Penny Lancaster allegedly nearly called it quits because he was dating supermodel Caprice Bourret at the same time

Insiders close to the couple told the outlet that the reason he chose Penny was because she gave him a better manicure.

Rod had previously revealed that he had a fling with another woman before completely committing to his wife Penny.

When Penny confronted him about a suspicious picture of him with Caprice in Marbella, Spain, Rod told her it was just one of his daughter's friends.

A friend of Caprice said that she was at the height of her fame when Rod called and asked her out on a date.

She dumped her boyfriend for Rod and immediately told him she would go out with him, with the pair hitting it off straight away.

After Caprice introduced Rod to her mum he suddenly stopped returning her calls, leaving her with a wounded ego. Split: Following his split from his first wife Rachel Hunter (right), Rod, 73, began dating both Caprice (left) and Penny in the summer of 1999

However she was even more heartbroken when a friend told her that he was dating Penny because she gave him manicures.

The friend said that Rod's pals couldn't believe he was dating Caprice and would listen up against the bedroom wall as the pair made love, high-fiving him afterwards.

The source claimed that he became known as the Scottish Stallion by his friends after his tryst with Caprice.

Despite choosing Penny, Rod always treated Caprice well and she doesn't have a bad word to say about the crooner.

She is now married to Ty Comfort, with whom she shares two children, and is pleased that he chose Penny back then.