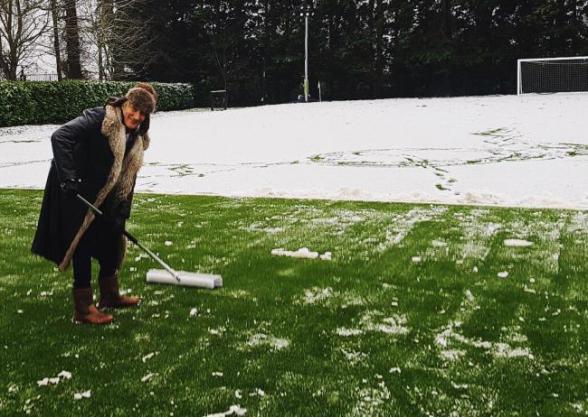 Celtic-daft rocker Sir Rod Stewart has been showed off his own football pitch at the weekend as he grabbed a shovel to clear away the snow for his boys.

The 73-year-old was at his 18th-century estate in Essex to make the full-sized pitch safe for his sons - Alastair, 12, and Aiden, six - to “practice their skills.”

READ MORE: Celtic need a strong Rangers - I can’t stand it when it’s too easy for us - Rod Stewart

Posting a picture of himself in action, the Maggie May singer wrote: “The things we do for the love of Football. Clearing the pitch so my two boys can enjoy practicing their skills.”Last month, Sir Rod unveiled his very own, personalised Hoops gym.

Dressed all in green, he showed off his prized room on Instagram which has a sign above the door reading: “Sir Rod Stewart, for Celtic.” 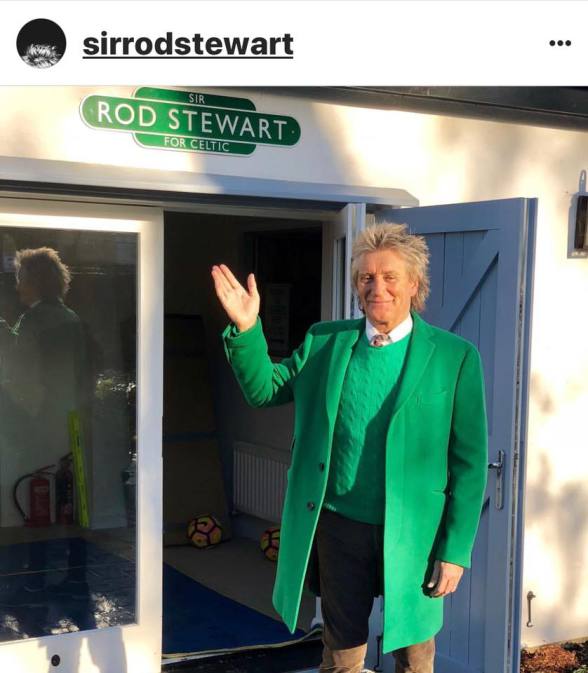 A very special message to ring in your 2018

A very special message to ring in your 2018! pic.twitter.com/5FqrHGtUuG

There is no doubt that Rod Stewart is one of the greatest singers in the history of rock, composer of a dozen unforgettable hits and performer of compositions of people as varied as Cat Stevens or Tom Waits. He started making his mark in bands like Faces, but soon after he launched himself as a soloist, embodying all the excesses of the rock star of the time.

Decades later, he was able to swerve and get into the old American repertoire of Gershwin and Cole Porter, among others, with such success that his complete work exceeds 100 million records sold.

Actually his name is Roderick, but his assistants call him "Roger" when they pass him the phone. However, his artistic debut in 1964 was like "Rod the Mod" and he is known all over the world: Rod, the crazy hair, the raspy voice and the shiny suits. Since 2017, you can also say "Sir", since the Queen named him Caballero, something that gives him so much pride that in many photos and recitals he is seen wearing the big medal around his neck.

"It's wonderful," he says, "that I'm Sir Rod Stewart now. You can not imagine the joy that gave me that distinction! When I go to Argentina they will see on the video screen the moment they delivered it to me. I am deeply honored and it is a great gift from the English people. "

-What would you say to John Lennon, who returned his MBE medal?

-I do not get it. I really do not understand why he did it, because it is not a medal of the royal family, but it is given by the English people after a vote. Maybe he got confused because the Queen handed it to him.

-They named you Caballero for your "services and acts of charity." Apparently, you overcame the stereotype of the Scottish stingy.

- (Laughter) According to the Scottish tradition, we are very careful with silver, but I am not like that. Not at all! I do many acts of charity and I would like to do many more.
It surprises you when some of your old hits reaches a new generation, again and again ?

-The music industry never ceases to amaze me. Every day that I wake up there is something new happening. It is a wonderful industry and I feel privileged to integrate it.

-Joe Jonas came with his DNCE group recently and sang "Do Ya Think I'm Sexy", which they re-recorded together recently. How did that encounter come about?

-I do not remember exactly, but I think we were trying to make an album with a lot of young artists, all of them singing my songs. We arrived halfway and we got that song as a single, but at one point I told the record company that I had finished a new album, which will be released next year, so we drafted that project for a while. I really liked the version they put together in Do Ya Think I'm Sexy , and I do not imagine that it could have been done in any other way.

- And it surprised you when A $ AP Rocky sampled "In a Broken Dream", for his hit "Everyday"?

-Yes! I did not know anything about it until I heard it on the radio. I had heard rumors, but I did not hear the subject until it rang on the radio. Did you succeed in Argentina? Maybe we should do it live in February ...

- What can you anticipate of the new album that you just mentioned?

- They are eleven original songs and a cover of Prefab Sprout that was totally new. It's 98% ready and I think we'll get it out in May. There are very personal songs about friends who have left. It's a great record and I'm very proud of the result. Bah, if not, I would not take it out!

-In the previous two albums you had as co-producer Kevin Savigar. Here too?

-Yes. My old band mate! He was the co-producer of Time and Another Country , which was when I went back to compose songs and stopped making versions of others. Now he joined the tour group again as musical director, because keyboardist Chuck Kentis is sick.

- How would you describe working with Kevin or with an old-school producer, like Clive Davis?

-Ah, it's totally different! In the old days we could spend whole months in a studio. Instead what we do now is record two or three songs in a week, because it is very easy to make changes and modifications in the edition. Kevin had set up a studio in a room of my house, and now we did the same in Los Angeles. This record was made in the living room of my house!

-From the '90s you did not write new songs until you got together with Kevin. Was it because you left the stick very high with hits like "Maggie May"?

-I do not know if that was it. I think that just in the '90s I was half lazy and I did not write anything. Then I recorded the discs of the Great American Songbook and had the opportunity to write a book. There, in the process of remembering my life, my friends and family, I discovered that I had many stories to turn into songs. That was the hinge, the turning point.

-During recent times there were many rumors about a record with Jeff Beck. Is there any possibility of achieving it?

-I don `t believe. We tried and it did not work. He does not even send me Christmas cards anymore. What an incredible character!
At the middle of this year you will do another "residence" at Caesar's Palace in Las Vegas, for the eighth time. In those shows, do you vary the list of songs or play it almost like a musical?

-The public changes every night, so the list is more or less the same, except three or four changes per night. I try to sing what people want to hear. They want to hear certain songs and I'm there to do that.

- All the great artists sing in Las Vegas lately, but before you had the prejudice that was a half decadent scene, right?

-Yes. In the old days it was totally different. In the Sinatra era it was a dinner-show format, so while you were singing there were waiters going around with plates and pushing strollers that made noise. Now it is not like that. It is the most beautiful theater in the world and a great place to see any artist you like a lot. There are no bad locations, the sound is wonderful and about 4,000 people enter. I love singing there.

-In Argentina you filled all kinds of stadiums, like River and Vélez. What do you remember from the other visits?

-One tends to remember first the recitals themselves, where some come to my mind and others do not. As for Buenos Aires, I adore it. I love their wide avenues, their businesses, people, food, drink and dancing. Argentina is a great country, and above all I love that there is so much sun. Now I will have the great opportunity to be in a stadium and also do a smaller show in the same city. It will be something tremendous. We will have a different theme list every night and on Valentine's Day everything will be full of love.
Of gala and elegant sport

Rod Stewart will put his voice to the night of Valentine's Day, on February 14, at a gala dinner to be held at the Centro Costa Salguero-entries from $ 12,000, for TopShow, and the 16 will be presented at the GEBA Stadium, with localities already sold out.

Rod Stewart was always a football fan. Their huge expenses are legendary for not losing a game in the '70s, when he listened to the radio story with expensive two-hour phone calls. As a good Scot, he is a fan of Celtic and Scotland, which continued to Argentina in 1978, where he was eliminated in the first round.
He played football regularly until a few years ago, even in a league of veterans, but knee problems and a meniscus operation left him out of court. "But I'm still kicking balls to the public at shows!" He clarifies.

-We go to the important question: Messi or Maradona?

-If you have to choose which is the best player of all time, it is really difficult to compare them, because the balls are better, the diets are better and the training is better. I think it is an unsuccessful exercise and both are great players. I also think that it is time to stop rewarding Messi and Ronaldo, so that another can win. I am tired that they are always the same! How about Aguero, who is a great player? There are really many good players now.

Memories of his first step in Argentina

Stewart's first recital in Argentina was in 1989, when he sang in Mar del Plata and in River. The second night Sailing dedicated Hernán and Fabiana Caffarone, who had died the previous year in Scotland, victims of a terrorist attack that blew up a 747 airplane of Pan American, in Lockerbie, and killed 270 people.

"We were not friends, but I read something about it or they told me about it and I wanted to say something about it," Rod recalls. Hernán's younger brother says that the recital was organized by Marcos Gastaldi, who asked the singer for the dedication. "Rod was a friend of Federico Gastaldi, and in turn his brother Marcos was of Hernán", says Ricardo Caffarone, who concludes: "What Rod did was very exciting