Sir Rod Stewart And Some Of His Early Faces 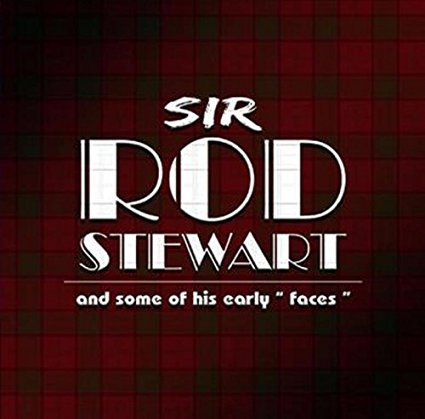 The 'Maggie May' hitmaker - who is married to Penny Lancaster - has been announced as one of the artists contributing a track to the new show at a Netflix panel at the Television Critics Association meeting.

Rod's cover will feature in the second season alongside Jennifer Hudson singing 'I'll Follow the Sun', Regina Spektor's 'And Your Bird Can Sing' and James Bay covering 'Hey Bulldog.'

Netflix announced that a 27-track two-disc soundtrack album for the first season will be released exclusively to Apple Music the day of the show's August 3 premiere.

The first season soundtrack, plus a 'Best Of' compilation of seasons 1 and 2, will be released on CD on 4 November.

The series has been created by Josh Wakely and revolves around five friends - Jay, Kumi, Crick, Buzz and Walter - who band together to explore and learn in an overgrown suburban backyard, which to them is their entire universe.

Speaking to Variety, Pearl Jam frontman Eddie Vedder, 51, said of his involvement: "Personally I'm very grateful to be part of [series creator] Josh's vision. ['Beat Bugs' is] a tremendous show for kids that combines beautiful animation with great stories and obviously some of the best songs ever written."

Pink: Lucy In The Sky With Diamonds

Frances: In My Life

The Shins: The Word

Regina Spektor: And Your Bird Can Sing

Of Monsters and Men: Eleanor Rigby

Tori Kelly: I'm Happy Just To Dance With You

Rod Stewart has added an additional (and final) Liverpool date to his ‘From Gasoline Alley to Another Country Hits 2016’ tour - and you can get tickets 24 hours early!

Fans will have the chance to see Rod perform at the Liverpool Echo Arena on Sunday Dec 18th, performing a set of both classics and new hits in his dazzling signature style.

With no shortage of chart-topping tracks, the ‘From Gasoline Alley to Another Country Hits 2016’ tour will captivate fans, truly living up to its name with performances of show stopping classics spanning five decades including: You Wear It Well, Maggie May, Da Ya Think I’m Sexy, Baby Jane, The First Cut is the Deepest, I Don’t Want To Talk About It, Tonight’s The Night, The Killing of Georgie and Sailing. Not only that, you can also expect hits from his most recent platinum-selling albums ‘Time’ and ‘Another Country’. 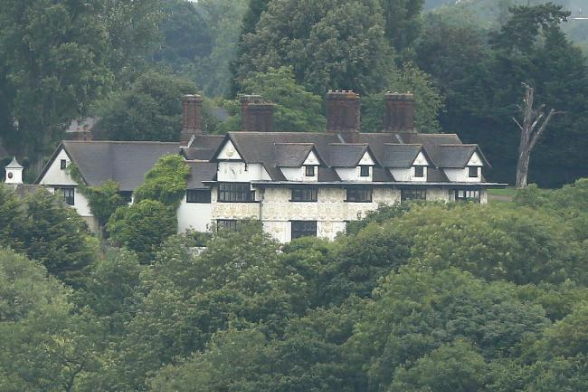 The recently-knighted Sir Rod Stewart is selling his Epping home of 30 years.

The mansion, in Copped Hall, comes with its own stables, swimming pool and full-sized football pitch.

With panoramic views of the surrounding land, an estate of about 24.8 acres and a Grade II listed residence, the home is being sold by Savills for £7.5million.

Sir Rod, 71, and wife Penny Lancaster, 45, are moving just 10 miles to Sheering in the north of Epping Forest, near Harlow.

The couple are reported to have bought the 18th century Durrington House in 2013 for £4.65million.

This year, Epping Forest District Council approved plans for a five-a-side football pitch at the house but refused permission for proposed floodlighting.

This review has been translated by google. Original page can be found here Click the link for photographs  http://www.noitemusicamagazine.pt/reportagens/rod-stewart-ao-vivo-na-meo-arena-fotos-texto/15502 Accompanied by great classics, the familiar husky voice and football, Rod Stewart filled the MEO Arena for a memorable concert.

Last night the entrance of MEO Arena was at least different from the usual. Known for being football fanatic fan, especially of Celtic Football Club, Rod Stewart, together with the organization, could not only that the concert was postponed until the end of the game, but also the fans of the selection and singer fans could watch the clearance on the screens of the concert hall

And shortly after finishing the game while resounded in MEO Arena the official anthem of the UEFA Champions League, the curtains went up and the band entered the stage. The public, which still vibrated with the result of the selection, attended the input Rod Stewart to sound "Having a Party" and the euphoria was remarkable. Surrounded by huge LED screens and a full house, the 71 year old singer was accompanied of great musicians who showed both skill and versatility.

"Some Guys" was the theme touched second and the entire audience stood up to dance and sing with Rod Stewart proved that age is just a number, showing as much energy as the audience. Not without first to congratulate the team for the win and qualify for the final, the evening continued with classics such as "Can not Stop Me Now", "Forever Young" and "Downtown Train", always introduced with the image of the corresponding album. It is the sound of "Stay With Me", 1971 issue, the singer surprised the audience kicking autographed footballs, thus emphasizing his taste for sport. And so the curtain falls on the first part.

10 minutes later the curtain reopens, now the sound of "Rhythm Of My Heart" and "Maggie". The public remains faithful to the singer's career following all standing issues and to sing, wave that was maintained throughout the show. 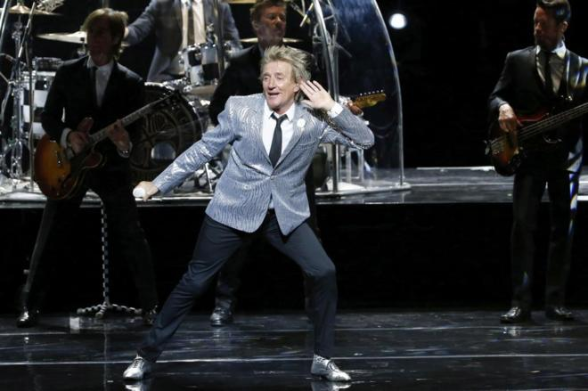 Royal Theatre has generous space, the Palco Real, which is usually empty on most occasions. Its function is to shelter the monarchs when some representation and longer preside. And sometimes, like yesterday, not even that. King Felipe and Queen Letizia attended the Madrid coliseum Tuesday to mark the Rod Stewart concert that opened the second edition of Universal Music Festival. But they did not locate their real backsides on seats intended for this purpose, but preferred to move to a side, surrounded by people (not so flat) and onlookers who scoured their movements. ¿Would sing a song? They will would caramelized in 'I do not want to talk about it'? They will would stand in the bailongos moments, like 'Do you think I'm sexy'? Too many demands for the head of state and his wife, who merely give some palms, take a few pictures with his cell phone and hit the thigh with the leg, like him, surely the most fan of both the old scoundrel Rod .

A Rod that came with American and silver boots on stage at the venerable temple which is now celebrating its bicentennial. Asking people to sit, but in the henhouse were already untied, Stewart began with 'Having a party', surrounded by a populated band of three batteries, as many guitars, keyboards, saxophone, four beautiful and lively chorus girls-dancers, and two violinists. Their giggles, their dance steps of vivalavirgen, their jokes confirmed that yes, it was him, but this boot sing in a thin voice that was sad to hear it.

The concert, for which about 1,800 tickets on sale were sold, was a mixture of its 'sets' of AOR (rock for adults), seventies pop, a little of their attempts to reconvert into 'crooner' and pretty search of his Celtic roots of his latest album, 'Another country'. The latter contribution is needed Rod concert, which is already quite funny and enjoyable above social classes, ages and musical tastes.

After 'Some guys Have all the luck', and while sweat a rapturous evening with a handkerchief then hang her waist dried, Rod said the beautiful theater reminded concerts of his early career, kicking rooms British different coat. 'Forever Young' showed the band to stop, more banjo and acoustic guitar that violinists took before returning to their instruments in a string divertimento Celtic while Rod briefly slipped backstage. 'Maggie May', sung from less to more, like having a little about the subject, leaving the matter to your hips, palms of the public and those wonderful guitars that his former fellow Faces tangling four decades ago in a song that endures as long as you throw up. 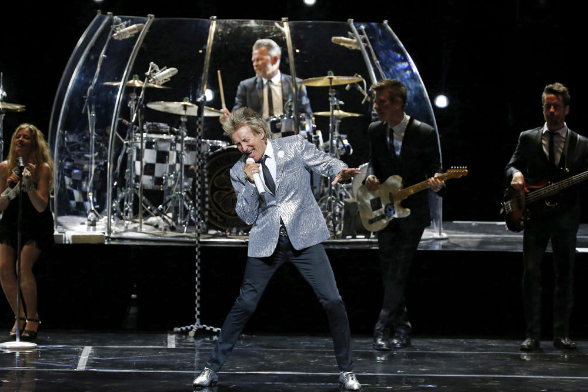 This review has been translated by google. The original page can be found here  http://www.parismatch.com/Culture/Musique/Hier-soir-a-Monaco-1010860 Rod took the stage with a quarter of an hour late. But he warned the event organizers, so did Europe, output in non euro from Germany or Italy. And Rod wanted to watch the end of the match, yet he has not seen due to extensions.

The Mad Scotsman ball arrived relaxed in the room Etoiles of the Sporting ahead with its superb dancers and musicians, all dressed in short spangled dresses. He launched the summer season shows the "Monte Carlo summer festival" where other artists will follow one another, Lana Del Rey at Aznavour through the Insus or stainless Julio Iglesias.

Smiling, relax, Rod, frequent visitor, looks cool in all circumstances. And so young ... The viewer can hardly imagine that this man, who dared to write the truth about women with his "Blondes have more fun" album 71 years. It looks like a joker kid, like his former crony of the Faces Stones Ronnie Wood. Since Rod Stewart is not prudish kind to not interpret the unknown titles for a new disc, it makes its tubes, the great popular and melodic songs, with Celtic harp trend when entered. It is a joy to hear his ode to the schoolgirl "Maggie May", or see dance to its "Forever Young" anthem. Thin, sharpened, it does the job even adding a personal touch when talking about the encouragement of his father in the song "Can not stop me now" distant time when no record company believed in him. Images of young Rod will scroll on the sides of the room.

The orchestra provides nor baloche or in the solo excessively. The voice is hoarse course, the hair firecracker, the color of the mane peroxidised, but something is missing ... Oh no, it's discreet, but it can be seen: Rod Stewart has not abandoned his dear and elegant preferred pattern, leopard, socks and shoes are covered.

The hearing is not like a priori to the classic rock of public performance. Here 800 people dine, drink champagne and pay hundreds of euros them. Rod could have quoted the famous phrase of the micro John Lennon when the Beatles played before the royal family, "shake your jewelry," but it was not needed. Even during his three pieces crooner Rod whispers his hits seated on a chair, a hundred women in evening dresses and men who had little dogs danced to punk-like face on the track to him, throwing roses decorating tables on stage and especially, especially, the filmed from every angle with their laptops.

The Californian adoption, Steward lives in Los Angeles for decades graced the customers Sporting a beautiful old tube Faces, his group of early 70s, was able to raise the temperature with "Tonight is the Night "or his cover of Cat Stevens," The first cut is the deepest. " The singing tower was smoothly conducted, between classroom and relaxation. Rod may well have passed tens of millions of records, it appears accessible and friendly, as is often the stars of this generation. This father of 7 children concluded the concert with 1:10 of the question that torments him for so many years, "Da ya think i'm sexy?" But Rod yes, ye