'It's a lovely surprise!' Ronnie Wood is honoured with the Freedom of the City of London in recognition of his services to music as the rocker says it has made his family 'very proud'

Rolling Stones star Ronnie Wood has been honoured with the Freedom of the City of London in recognition of his services to music.

The musician, 73, has received the accolade which is offered by the City of London Corporation to celebrate a significant achievement within a particular industry.

In a statement the rocker said that the award has made his theatre producer wife Sally, 42, and their twin girls Gracie Jane and Alice Rose, both four, 'very proud'. 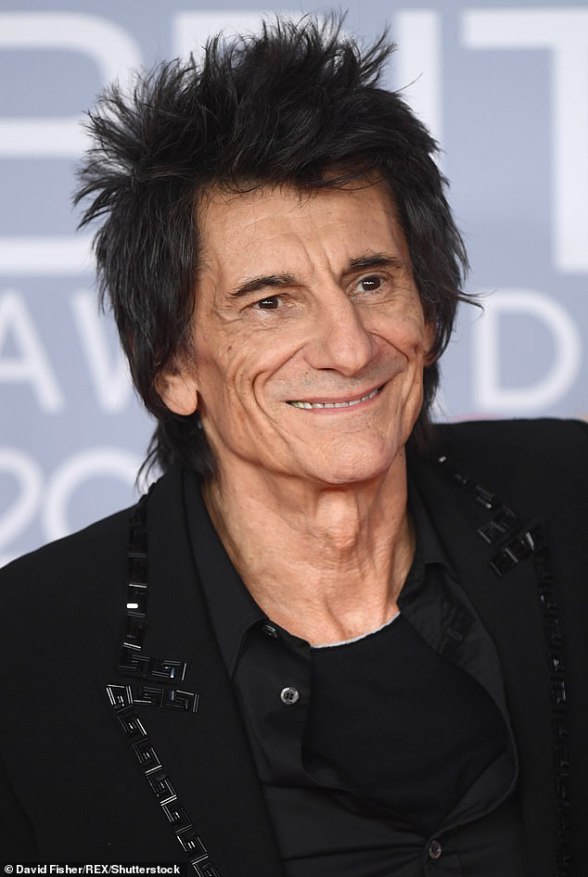 Speaking of the recognition, Ronnie said: 'My Lord Mayor, Lord Chamberlain, Ladies and Gentlemen, I am humbled and honoured to receive the Freedom of the City of London.

'As a child, I saw the city from the canals and over the years I've seen it from many different perspectives.

'Despite my career in music and art taking me all over the world, I am never happier than when coming home to this great city where I was born.

'It is a lovely surprise to be recognised with this award and it has made me, Sally, and my twin girls Alice and Gracie very proud.

'I very much hope to come and meet you in person at the Guildhall when circumstances allow.' 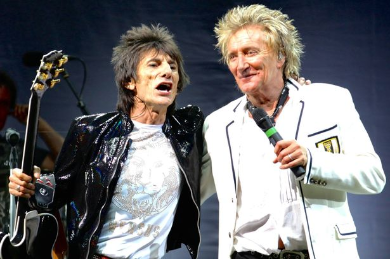 Ronnie Wood is lining up Rod Stewart to be a godparent to one of his new tots.

The Rolling Stone, 68 , enlisted Rod as best man when he walked down the aisle three years ago.

And Ronnie - who is expecting twins with theatre producer wife Sally, 37 - has been given regular advice by 70-year-old Rod who had his eighth child in 2011.

A source said: “Rod is an inspiration to Ronnie. If they christen the children Rod will be first in line to be godparent.

“Ronnie has been confiding in him a lot and getting great advice about changing nappies.

Rolling Stones' Ronnie Wood to be father to twins, age 68 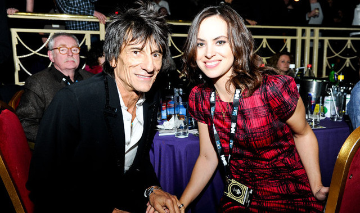 It was announced over the weekend that Wood, 68, and his wife Sally Humphries, 37, are expecting twins. Wood married theatre production company owner Humphries (pictured above) in 2012 and are expecting their first children together.

A spokesperson for the band issued the following statement: "Sally and Ronnie Wood are delighted to announce that they are expecting twins in June 2016. Needless to say, they are thrilled and overjoyed with the wonderful news
Wood has four children from previous relationships. His eldest, Jesse, with former model Krissy Wood and two, Leah and Tyrone, with ex wife Jo. Wood also adopted Jo's son Jamie in 1985. The musician has eight grandchildren.

"We’ll maybe go in the studio in December and cut a few tracks and see what happens," Wood recently told ABC Radio. "We’ll take it from there, see how it all goes. One thing at a time." Wood added that the session would lay "some groundwork" for what will be their 23rd studio LP.

The Rolling Stones released their most recent album 'A Bigger Bang' in 2005.

RONNIE WOOD and GENESIS PUBLICATIONS have announced a MAY date for the publication of a new, signed, limited edition book, "How Can It Be? A Rock & Roll Diary."

Ten years before he joined THE ROLLING STONES, WOOD’s musical apprenticeship with THE BIRDS catapulted him onto the stage of swinging LONDON’s music scene at the tender age of 17.

Featuring a cast of characters including JEFF BECK, PETE TOWNSHEND, ERIC CLAPTON, KEITH MOON, MARIANNE FAITHFULL and more, the story of RONNIE's adventures was handwritten in his 1965 diary. Inspired by its discovery 50 years later, WOOD presents his journal for the first time, plus much more in a major new book for 2015.

The 1965 handwritten diary has been produced in facsimile, down to its scuffs and scratches. RONNIE WOOD reflects on the words he wrote 50 years ago and shares his memories in an extensive new manuscript.

He is also creating a series of original and exclusive artworks to illustrate his words throughout the book. ‘How Can It Be? A Rock & Roll Diary’ also uncovers rare and unseen photographs and ephemera.

Said WOOD: “This diary shows what an amazing schedule I had. We’d be travelling the length and breadth of the country every day. With youth on our side, it was a continuing adventure. Our overspilling energy was enough to take care of work every night of the week. It was enough to chase the girls, enough to write songs, enough to rehearse and enough to travel. It was all go, all the time.”

Released in a limited edition of just 1965 copies, each book is signed by RONNIE WOOD and available for pre-order at www.RonnieWoodBook.com.

If you have never heard of Ronnie Wood, then you know little about rock ‘n’ roll. He is regarded as one of the most talented axe-men of his generation. He has been a member of The Jeff Beck Group, The Faces, The New Barbarians, Rod Stewart’s solo projects, and The Rolling Stones. He has also been a featured guest at live performances ranging from The Last Waltz to Eric Clapton’s Rainbow Concert. His debut album, “I’ve Got My Own Album To Do,” which Wood recorded at his house, turned 40 years old this September.

The album itself is an impressive set of rock ‘n’ roll tracks, but the legend and lore behind the music is what makes the album even more mythical. For a start, the album marks the first great collaboration between Wood and Keith Richards. Since 1974, the two have been rock ‘n’ roll soul mates that literally speak to each other through their guitars to the extent that any concert is more or less a playful debate.

According to Wood, Richards ended up at Woods’ house while Wood was making the album after a night spent out at a bar. One inebriated evening turned into four months with Richards as a roommate. One night together recording parts for “I’ve Got My Own Album To Do” was the catalyst for the partnership that now defines the sound of The Rolling Stones after ’75.

Rod Stewart, Ian McLagan and Kenney Jones, who were band mates with Wood in The Faces were guests on the album. Wood partnered with George Harrison on slide guitar for the track “Far East Man.” Wood recalls that Keith Moon and Ringo Starr showed up to play one night, but the drum kit had been sent away to be repaired. Wood taught the two legendary British rock drummers how to properly play an E chord on guitar.

David Bowie and Mick Jagger both lent help on the vocals of “I Can Feel the Fire.” Jagger helped Wood arrange the song and after the track was laid down, Jagger asked for Wood’s help on a new Rolling Stones song, “It’s Only Rock and Roll.” The first recording of the song featured Wood, Jagger, Jones, and Bowie.

Richards later recorded his own guitar tracks, but Wood’s 12-string can still be heard on the record. Mick Taylor played as a guest on the album as well and after his departure from The Rolling Stones in 1975, Wood filled in and has been sitting in ever since.

In one sense, the album is a tribute to the genius and talent for collaboration of Wood. The album is also only short of being a Ronnie Wood album with The Rolling Stones as his backing band by Bill Wyman and Charlie Watts.

The opening track, “I Can Feel the Fire,” starts the album off with a bang featuring a line-up that most super groups fail to achieve. The track “Act Together” showcases what Wood could do with a Jagger and Richards song.

The final track on the A side of the LP, “Am I Grooving You,” is a heavy blues fueled song that fits Wood’s guitar skills, vocal qualities, and harmonica together in a package that remains a steady live number for Wood.

After 40 years, “I’ve Got My Own Album To Do” has held its value. In retrospect, it is mind-blowing to think that a single guitar player’s first solo attempt would trigger the quintessential classic rock guitar partnership and predict the post ’75 evolutionary trajectory of The Rolling Stones.

If you dare call yourself a true fan of The Rolling Stones, don’t be caught dead without this album in your collection. While you’re at it, check out some of Wood’s impressive paintings.

Ronnie Wood almost faceplants the pavement while walking his dog

For five decades the rocker has been a massive handful, and now he knows what it feels like to be on the other end of things 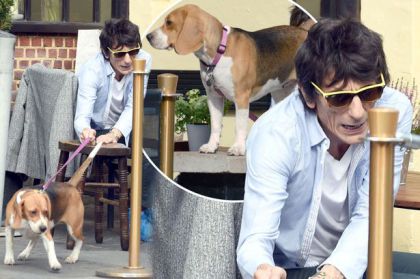 Since the 1970s he's been one of the biggest hellraisers that the music industry has ever seen.

But now Ronnie Wood has had a taste of his own medicine after his unruly dog tried to break a few rules and make a run for it.

At the time the rocker was holding the adorable pooch on a lead but seemed destined to faceplant the pavement as he struggled for control. 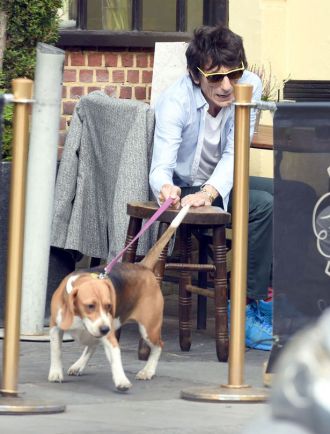 Luckily for the 67-year-old he was able to avoid a collision with the floor after supporting himself on a nearby chair.

The father-of-four had stopped for a quick drink at the pub with his wife Sally Humphreys and her parents, Alison and Colin, when the power struggle ensued.

However it didn't take long for the Rolling Stones member to forgive the canine who was later spotted scaling a concrete wall in front of his owner. 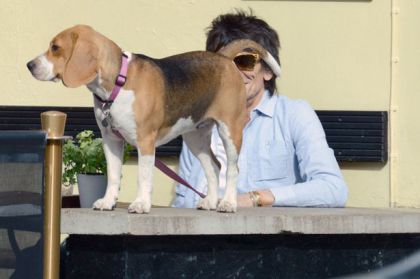 We're sure all it takes is one flash of those puppy dog eyes and he can do whatever he wants.

Besides, the two seem like best of friends and have even been known to pose for a selife or two together.

Earlier this year Sally, who is 31 years her husband's junior, revealed that she wanted to have a baby with the guitarist despite his age

When asked if she wanted kids, the theatre producer replied: "Yeah I do. There’s no plans but there's no non plans, if you see what I mean. As time ticks on I would like children.

"A baby would be nice. Obviously we’ve spoken about it quite a lot, and you can ask him and his response would be, 'Well, that would be nice.'

"He's got a lot of friends that are older who have younger children and they all say it's fantastic and it keeps you young. I do think that would be wonderful, but I don’t know if it will happen. I hope so." 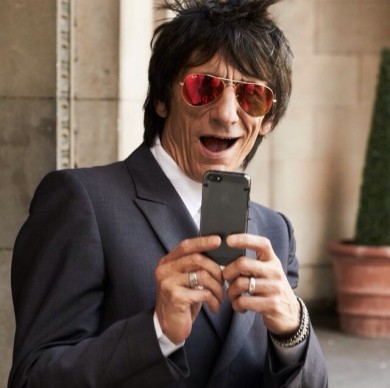 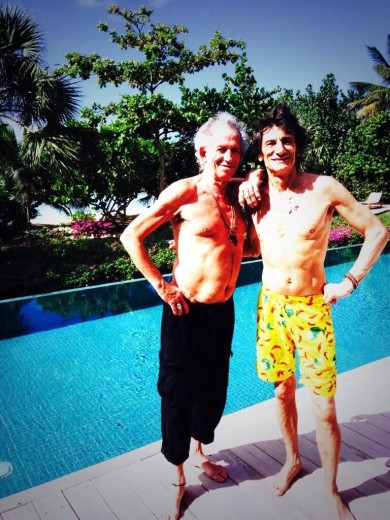 Sketching in the Big Apple...15th November 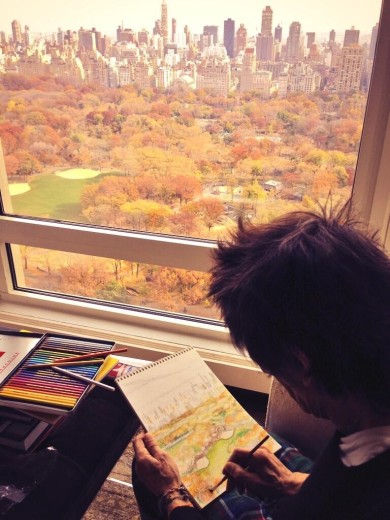 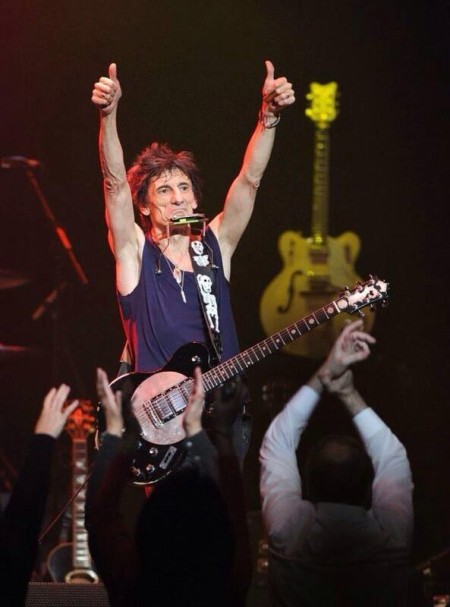 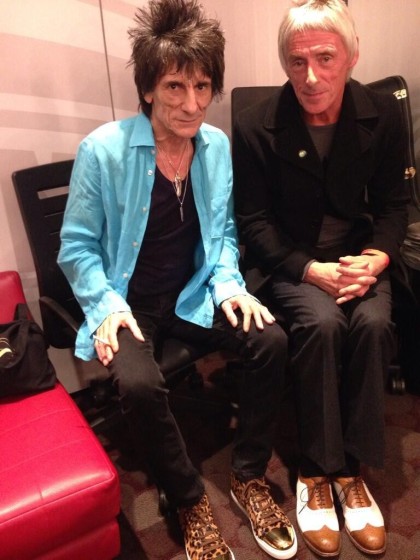 Back with Paul Weller 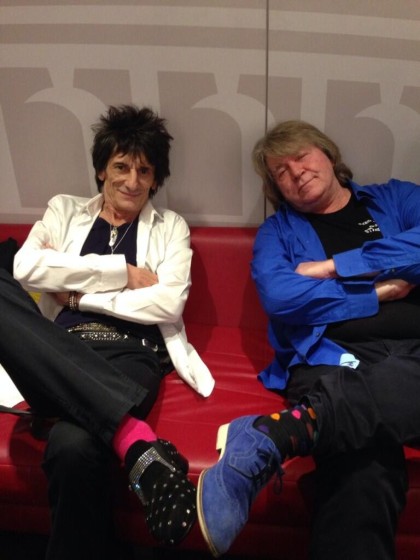 Ronnie at the Troubadour 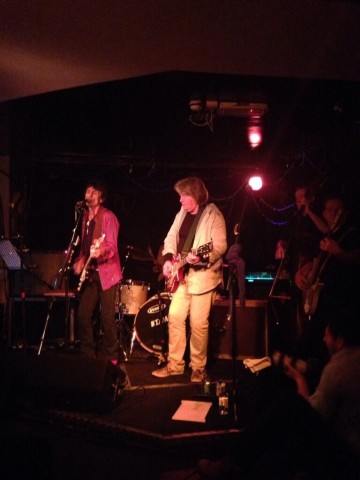 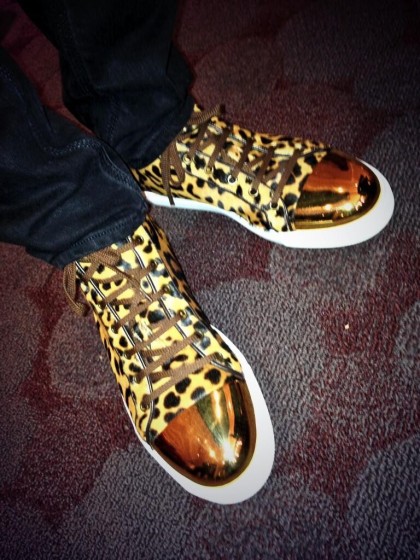 ...not to mention a pair of rather 'loud' shoes! Who said Rod was the flash one in the Faces!?

30th Oct - Just played an impromptu Jimmy Reed gig at the Troubadour ~ I'm so pleased with my band. See you Fri! @BluesFestUK 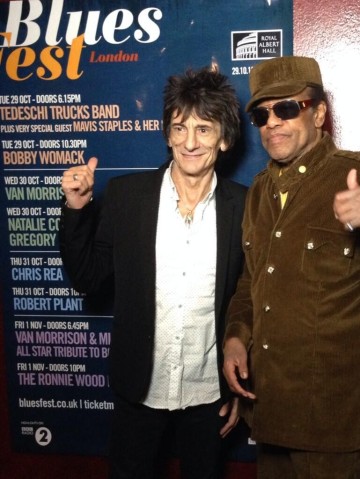 28 Oct - Today I'm with @RealBobbyWomack ahead of @BluesFestUK ~ just presented him with a lifetime achievement award. 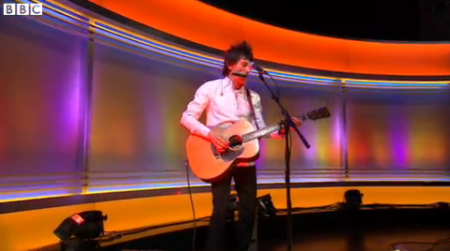 Ronnie was a guest on the Andrew Marr show Sunday 27 October on BBC 2.

He spoke about the Stones, the Jimmy Reed tribute night and his artwork - and 'swapping' guitars with Keith.

Then he played a Jimmy Reed accoustic blues number on a vintage Masters accoustic - and played harmonica and sang. Talented, genuine and humorous good guy, as we know. Well done Ron!

Former Rolling Stones guitarist Mick Taylor will be part of Ronnie’s band on stage at the closing night of BluesFest. Mick Taylor made an stunning guest performance on The Stones’ 50 & Counting tour, and will rejoin Ronnie on stage at BluesFest in tribute to the legendary Blues artist Jimmy Reed. 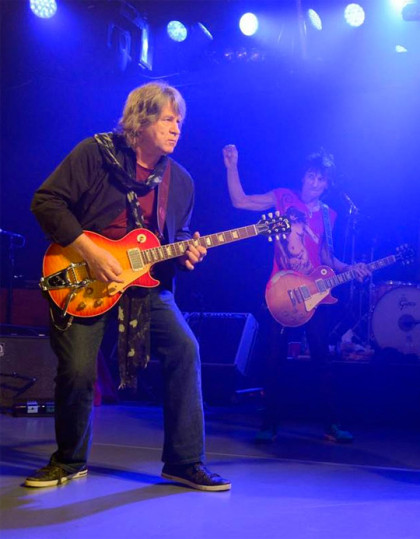 Ronnie joined Paul Weller on "Be Happy Children" at Hammersmith Apollo on 19.10.13. 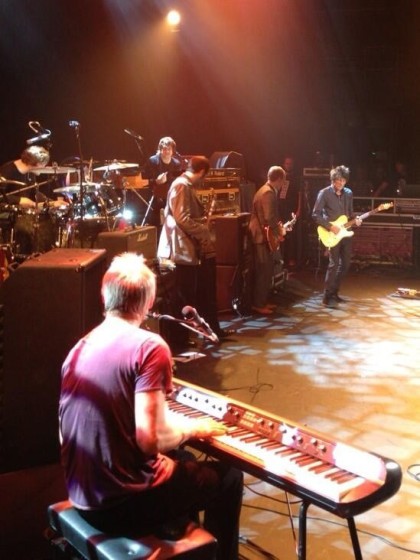 "When I get inspired I get almost possessed and I just have to paint." 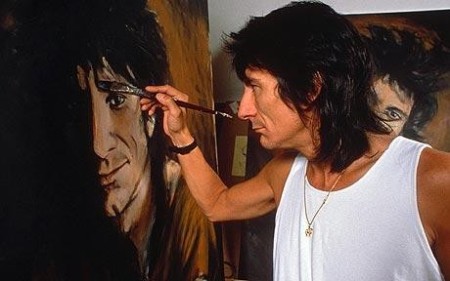 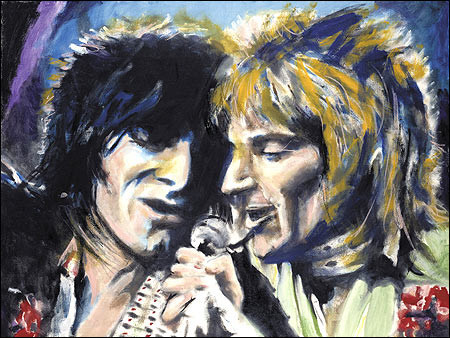 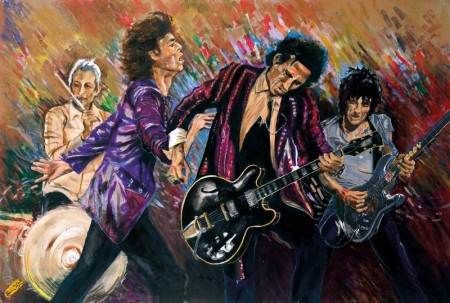 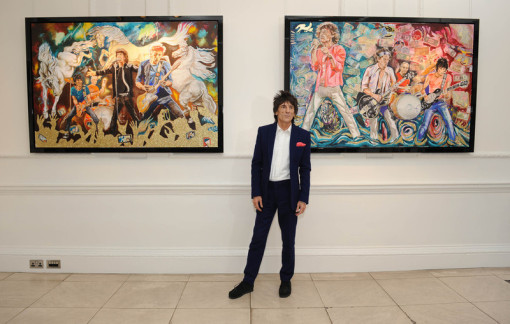 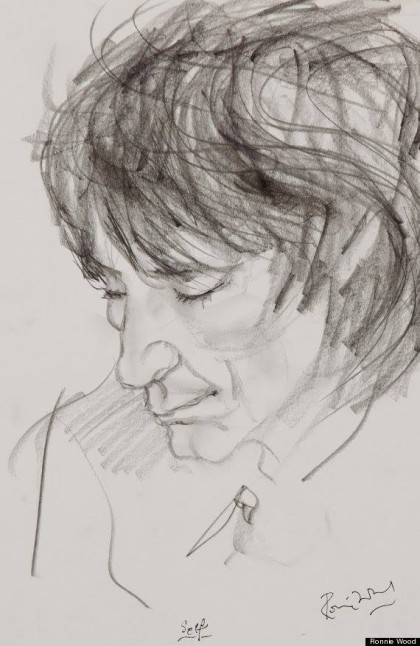