Rod Stewart sports a Celtic face mask as he is helped with his bags while walking on crutches six months after £8,000 ankle operation

Rod Stewart was spotted out and about on a shopping spree while on crutches six months after his £8,000 ankle operation on Monday.

The rocker, 76, showed some love for his football team as he sported a Celtic mask in the club's colours while out on Oxford Street in central London.

Rod supported himself with a pair of crutches, while a male companion appeared to carry two shopping bags for the superstar during the trip. Rod, who was wearing a boot on his right leg, looked typically stylish in a plaid blazer, which he wore over a white shirt and camel-coloured jumper.

The singer, who is married to wife Penny Lancaster, also added a pair of slightly distressed cream jeans to his ensemble and a pair of trainers.

At the end of the trip, Rod was seen getting into the back of a white Rolls Royce.

'Excited to be OUT out!' Penny Lancaster, 50, enjoys a family dinner with husband Rod Stewart, 76, in London after lockdown restrictions were eased

He's in the midst of a lengthy recovery after undergoing an £8,000 ankle surgery.

But Rod Stewart was in high spirits as he enjoyed a romantic outdoor dinner with his wife Penny Lancaster and their family at The Ned in London on Saturday.

The music legend, 76, appeared in a sweet snap with his glamorous wife, 50, which she shared to Instagram, gushing they were 'excited' to finally be able to dine out after lockdown restrictions were eased last week. The model beamed alongside her dapper husband in the snap as they enjoyed dinner together.

Penny captioned her post: 'Very excited to be OUT OUT @thenedlondon with the family.

Rod Stewart shows his support for the Hoops in Celtic FC hoodie while watching son Aiden's match as he continues to be on crutches six months after £8,000 ankle surgery

He has been a long-standing fan of Celtic Football Club.

And Rod Stewart showed his support for the Hoops as he was decked head to toe in their merchandise while watching his son's football match in Essex on Sunday.

Six months on from his ankle surgery, which cost an eye-watering £8,000, the singing legend, 76, didn't let being on crutches get him down as he headed to the pitch to cheer his son Aiden, 10, on. The Maggie May hitmaker was able to rest his foot, which was in a plastic boot, as he sat in a fold-up chair during the game.

Rod, who previously said 'Celtic FC means everything to me' proved to be their biggest supporter as he arrived in a hoodie and black padded coat which was embellished with his teams' logo.

The 76-year-old rocker, who battled the cancer for two and a half years before being given the all-clear, described it as a "very dangerous disease".

Rod Stewart has urged Scots to get checked for prostate cancer with a cheeky message outside a clinic.

The 76-year-old rocker posted video of himself outside The Harley Street Clinic in London on his Instagram story yesterday.

He told fans to get their PSA test as soon as possible while noting his own two and a half year battle with cancer.

Speaking on social media, the legendary crooner said: “I just want to let you know that this is a very dangerous disease - I’ve had it and there are no symptoms.

The 76-year-old singer-songwriter has made a personal intervention as the former Bournemouth manager weighs up his next move. 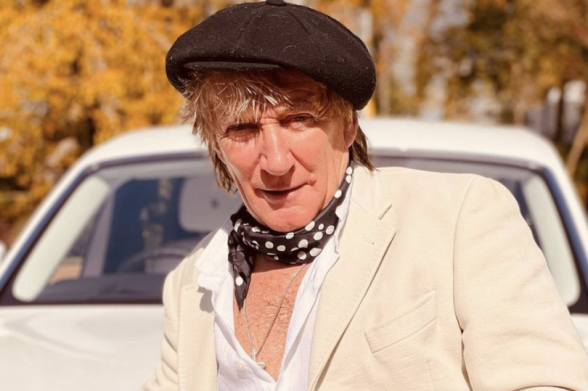 Rod Stewart has pleaded with Eddie Howe to make a decision on joining Celtic.

Club diehard Stewart has sent a message to the former Bournemouth after talks over his potential Parkhead appointment hit a number of stumbling blocks.

Howe has met with Celtic officials but his camp last week denied an agreement was close.

It's left fans in limbo and former Faces frontman Stewart is no different in that regard.

And he's now tried his hand with a personal intervention on Instagram, aimed at getting Celtic's top managerial to make a call on his future.

The 76-year-old singer-songwriter posted a picture on his official page, holding up a sign directed at Howe.

Stewart made a similar plea to defender Shane Duffy earlier this season as he weighed up a loan switch from Brighton.

He eventually agreed a season-long switch to his boyhood heroes despite interest from West Ham.

Penny Lancaster revealed on Loose Women her rocker husband Rod Stewart, 76, bought her a narrowboat for her 50th birthday after she decided she wanted a new hobby for lockdown.

Speaking to host Charlene White and panelists Jane Moore and Nadia Sawahla, Penny said it was her dream to buy a narrowboat and renovate it.

"I know it was your birthday recently, happy belated birthday, the big five zero, so tell us, how did you celebrate?" asked Charlene.

Penny, who married Rod in 2007, replied: "Well how wonderful is Zoom? 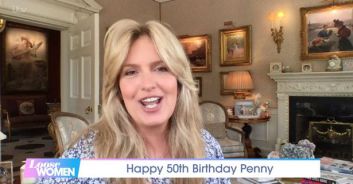 "I was able to have a zoom party and all my girlfriends secretly did their own video to one of Rod’s songs, that they played to me on the night of my birthday.

"We had a drink and I had so many cards and flowers, it was just wonderful.

"Normally we could catch up and go for dinner or drinks somewhere, but it was nice to get the extra special attention people paid to remembering the past and their fondest memories about you, we wouldn't usually get that opportunity in one night. "

Jane asked: "Come on, we all want to know, what did Rod get you?"

Penny replied: "Well, in the first lockdown I realised I quite enjoyed it, i enjoyed slowing down and a more simple life.

"The second lockdown was a bit tougher, and I thought, 'I need to think of something, a hobby, where I can slow down', and there is a lovely river near us that snakes its way down to London.

Charlene then jokingly began to sing Rod's song We Are Sailing in honour of the expensive gift.