EXCLUSIVE: Rod headed off with Penny and ­snuggled into her shoulder after a 50th birthday bash for one of his friends. His wife now also works as a special constable for the City of London Police 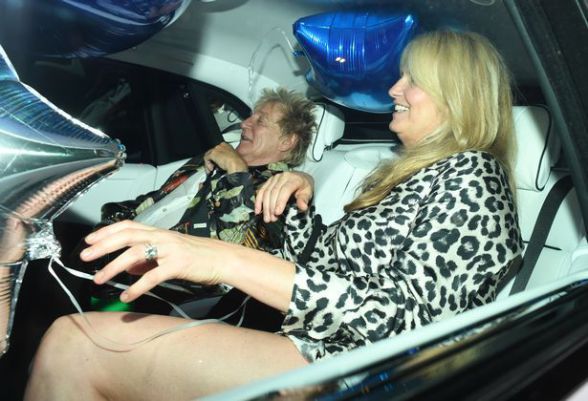 He sang that the first cut is the deepest – but it looks like the half-cut are the sleepiest as Rod Stewart flakes out in the back of his car after a big night out.

The Forever Young Rocker, 76, headed off with smiling wife Penny Lancaster and ­snuggled into her shoulder after a 50th birthday bash for one of his friends.

Rod must have realised it was time to leave after he lined up with the lads – and one opened his coat to reveal a large ­collection of watches.

Former model and TV personality Penny, 50, now also works as a special constable for the City of London Police. 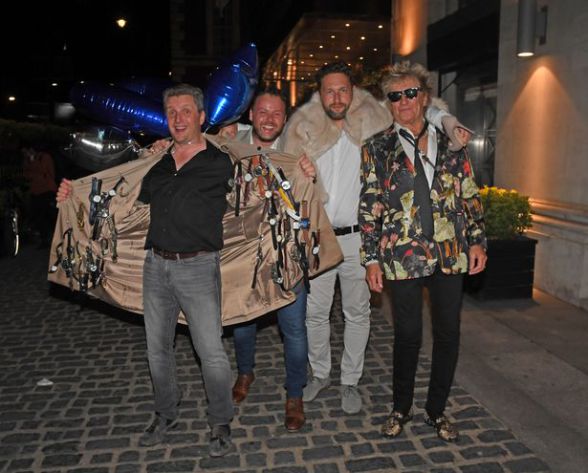 But she swapped her uniform for an animal print mini-dress at the do in the Marriott Hotel in the capital on Friday.

And she was clearly enjoying being off duty as she posed with a pal, kicked off her heels and borrowed a balloon for the journey home in Rod’s new £400k white Rolls Royce Phantom.

It’s been a busy June for Penny and Da Ya Think I’m Sexy singer Rod, who recently celebrated their 14th anniversary. They wear it well.

Rod Stewart filmed a video message for Bertie before Scotland took on Croatia in their last UEFA Euro 2020 match at Hampden last night.

Sir Rod Stewart has sent his best wishes to Celtic legend Bertie Auld after it emerged he had been diagnosed with dementia.

The 83-year-old's family announced doctors had said he was suffering from the condition last week.

The Lisbon Lion is being cared for at his home in Strathaven, Lanarkshire.

They have now been joined by rocker and Celtic diehard Stewart, 76, who filmed a video before Scotland took on Croatia in their last UEFA Euro 2020 match at Hampden on Tuesday night.

In the clip, he said: "Hi Bertie, it's Rod here. Just about to watch the Croatia v Scotland game.

"I hear you're not feeling too good mate, please get well soon.

Scotland supporter Rod Stewart puts on an animated display as he leaves Wembley with his two sons Alastair, 15, and Aiden, 9, and is mobbed by fans after watching historic Euros match

Rod Stewart put on an animated display as he left Wembley after watching the historic Scotland vs England Euros match on Friday night and was mobbed by excitable fans.

The singer, 76, who is a proud Scotland supporter, looked in high spirits as he exited the stadium alongside his two sons Alastair, 15 and Aiden, nine, who he shares with wife Penny Lancaster, 50, as well as hoards of other raucous football fans.

Rod - who has supported Glasgow-based football club Celtic FC over the years - brandished a Scottish flag and posed for pictures with one delighted fan who had donned a traditional kilt for the game.

The Maggie May singer joined BBC Breakfast to talk about supporting Scotland tonight.

"I would love to see the Scots win, it's going to be an uphill climb but win or lose as long as they make us proud...1-0 to Scotland and I will die a happy man."

"I am the Cockney Scotsman, and we do take this game seriously against the old enemy!

When asked what his plans for the game were, Rod said: "I'm very passionate, I'm actually going to be going, I've actually got a box for six, which cost me an arm and a leg - I had to sell the house to buy it", he laughs.

He added: "I'm taking my two sons and two of my best friends who are all Scotland supporters and we're just going to hope for the best as I said, as long as they make us proud win or lose.

Naga added: "Did your sons have any choice as to which home nations team they support?"

Celtic-daft Rod replied: "Absolutely, I've got four sons who all support Scotland and I didn't have beat them up to do it - it's just like when I was a little kid my dad was Scottish and I wondered why we would talk about Scottish football and Scotland and the penny dropped so I went to my first England and Scotland match when I was thirteen."

A post shared by Johnny Mac & The Faithfull (@johnnymacandthefaithful)

The pair looked happy as they cuddled up for a snap and toasted to their wedding which took place in Italy in 2007. 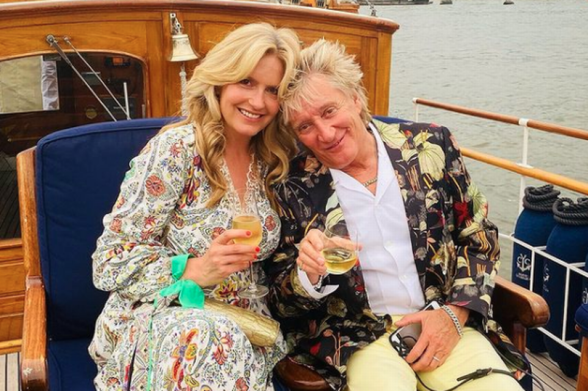 Rod Stewart and Penny Lancaster have marked their 14-year wedding anniversary with a lavish boat ride in London.

The Celtic-daft rocker whisked his wife away on a romantic sail down the Thames in the glistening sunshine and even treated her to a glass of bubbly.

The pair looked content as they cuddled up for a snap and toasted to their wedding which took place in Italy in 2007.

Police officer Penny looked radiant as she donned a floral print maxi dress and her hair in lose curls and Rod smiled away in a pair of lemon trousers and a funky patterned suit jacket.

Wishing her husband a happy anniversary on Instagram, Penny wrote: “Celebrating our 14th wedding anniversary on #sigridofchelsea in aid of @chainofhopeuk #london #thethames.”

Support @UNHumanRights and their #CallforCode challenge that encourages developers around the world to create solutions to help our planet - and people.

It's a wonderful world, so let's take action to protect it. 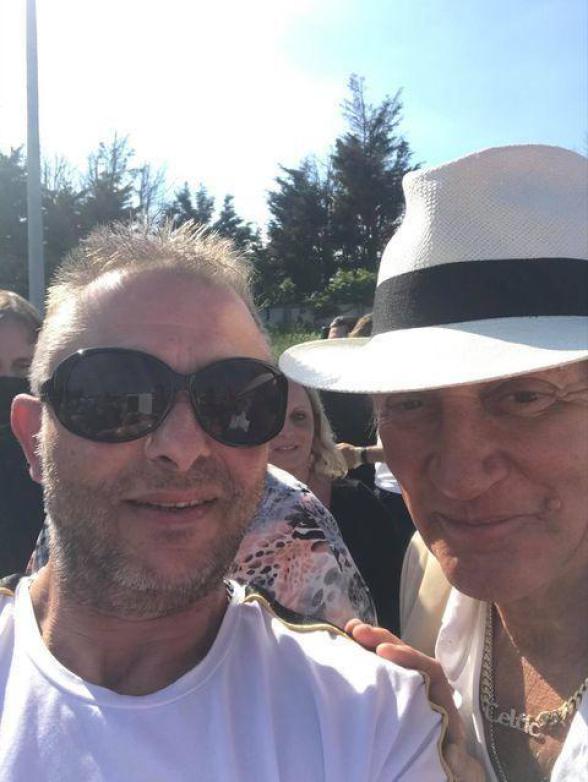 A LEGENDARY singer was reportedly spotted enjoying a knock-out afternoon of boxing entertainment in a seaside town over the weekend.

Sir Rod Stewart, 76, was seen on Saturday by a fan at FC Clacton’s Austin Arena, where Eastside Boxing Promotions was hosting a fight night.

The veteran hitmaker, famous for songs such as Maggie May and The First Cut Is The Deepest, owns a luxury home in Essex, so did not have far to travel.

Icon Rod, who is married to model Penny Lancaster, originally of Chelmsford, was clocked at the event by Ray Pemberton.

The Clacton resident said: “He was just amazing to talk to and was so pleased to be in Clacton.

"I am still starstruck."

Former model Penny Lancaster recently flashed the side of her bum cheek for her fans online, as she flaunted her incredibly long, gorgeous legs in a thigh-high split dress

Penny Lancaster put on a very leggy display for her fans online recently, as she gave them a glimpse of what she got up to over the weekend.

Taking to Instagram, Penny, 50, shared a gorgeous snap of herself with her husband Rod Stewart and friends.

Though the overall image was lovely, many fans were drawn to the former model's incredibly long legs.

Smiling happily for the camera, the yummy mummy wore a white floral dress that sported an extremely high slit down the side.

The star also risked a wardrobe malfunction as she casually flashed the side her bottom. 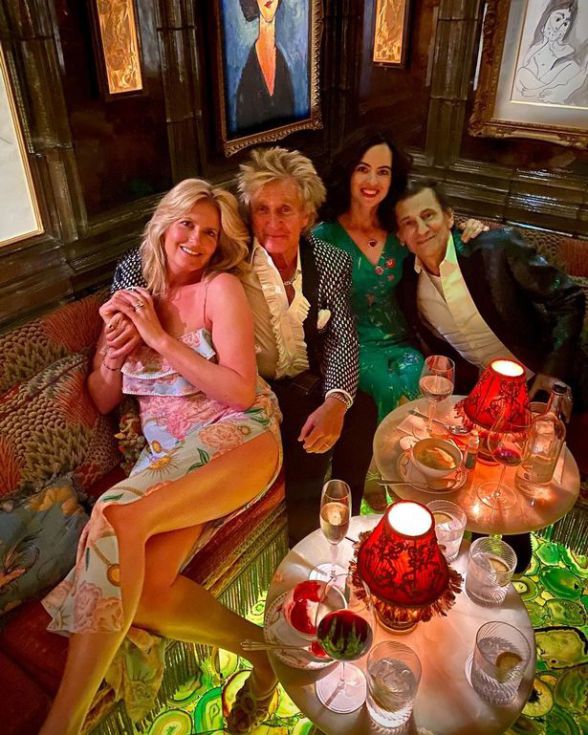 Penny's beautiful blonde locks sat effortlessly on her shoulders as she appeared to be wearing little to no makeup.

With her husband's arm securely wrapped around her, Penny added a pair of open-toe shoes to complete the look.

The couples seemed to have been enjoying drinks at a lavish spot as they were surrounded by several glasses.

Captioning the post, the blonde beauty penned: "Another amazing night with this lovely couple." 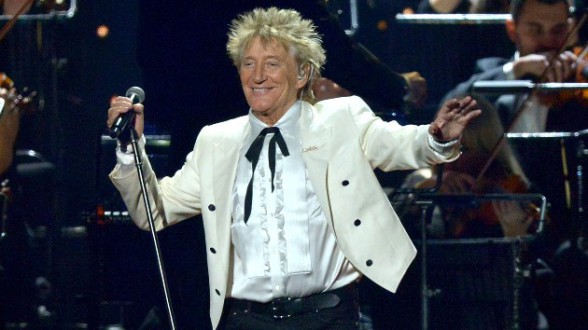 Happy birthday to Renee Stewart, who celebrated her 29th birthday on Tuesday. To mark the special occasion, the daughter of Rod Stewart and Rachel Hunter reunited with her family for a rooftop dinner in London.