Sharing this photo album with permission from photographer Robin Looy 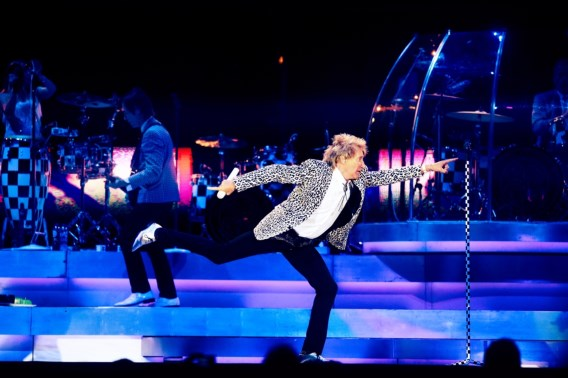 Translated by google to English it reads as follows

In a reduced Sportpaleis plezierde Rod Stewart fans with a hitshow, often got the allure of a song festival.

It was about eight years since Rod Stewart passed again in the country, but mainly it was forty years since its really creative period, the '70s when he was a wild boy with The Faces, an excellent white-soul singer himself and a star who scored after world wide world wide.

Stewart came to Antwerp as part of a new tour that started in Las Vegas, and it showed it. White, silver and gold were the colors in the slick decor. Multiple video screens projected old pictures of great albums, the young Rod and his children. There were balloons at the end, and especially a lot of sing-along hits.

His voice turned out he actually lost a bit, especially in the rougher parts Stewart could not and he did not have the energy to give the guitar party high notes. But there are tricks for: three sexy singers gave soulful background vocals, and during 'Hot Legs' our guy was just some autographed footballs into the crowd sjotten.

The best part was sitting somewhere in the middle, after the break. All musicians grabbed something acoustic and bite in which the audience warm atmosphere harp and strings sang passionately along with "The first cut is the deepest ',' I do not wanna talk about it" and "You're in my heart." Vocal Stewart did not have to force yourself, it throbbed like a bus.

In the rougher work it all seemed a bit harder. The engine seemed to light the dance moves may have looked stiff and off the routine dropping. We were happy with old songs like 'You wear it well "and" Maggie May "and even Muddy Waters'" Rollin 'and Tumblin', but in order to bring music have more power than Stewart has.

He looked it particularly well preserved, but miracles do not exist. Therefore, he would Jimi Hendrix's 'Angel' might get better his set list.

The bagpipes and kilts who occasionally played a part, were sometimes amusing, like the inflammatory intros into two parts: before the concert blaring football anthem 'The Final' Gianni Roma through the hall after the break was the whiskey song "Loch Lomond by Runrig.

followed towards the end more and more hits, with 'Sailing' and final round and singing "Da Ya Think I'm Sexy" as cheerful party balloons. Everyone happy, and a little after half past ten people could go home or to go to the Sinksenfoor.

Translated to English it reads as follows

A night Rod Stewart delivers great music, great enthusiasm and an extremely charming performer. That was the case in the seventies of the last century and it is reassuring to report that it was also the case this evening in Amsterdam. It was celebration in the Ziggo Dome.

Outside the room the contrast could hardly be greater: in the fringe and glitter-clad crowd of Toppers occurring in the adjacent Arena mixes it crossed almost without exception in jeans with robust fans of Rod Stewart. Kindly, but the rush makes sure that Stewart which starts later than planned. The opening is constructed for maximum effect: music of the Champions League, then the Raw Hide theme, the canvas (a huge shower) goes on, the band is finished in sleek suits and snazzy dresses and then there is the man himself. He looks remarkably young for his 71 years and he only has to laugh or the audience melts. Charisma.

Stewart started swinging with Having A Party, originally by Sam Cooke. His voice is good, but is some way into the mix. It is anyway still getting used to, because this is the first show of a series that will lead across Europe. The singer gestures are musicians occasionally where to stand and when later in the show a spot is not addressed properly, he wonders if the lighting technician may have been drunk. All this with so much charm that it looks like it belongs there. Experience lacking Stewart was not: the late sixties he sang at Faces, with that distinctive raspy voice and blend of soul and blues. Went somewhere in the seventies, around the time he moved to Los Angeles because of the British taxation, the music press accused him musically for big money (a reproach before Bob Dylan and Gerard Cox, and later met Metallica). That's one way to look against it, but you can also say that Stewart is increasingly developed as an entertainer, somewhere between Frank Sinatra and Robbie Williams. Songs like Sailing (naturally passed this evening) may be just on the edge, but Stewart she brings so much brilliance that you're sold.

Football and short skirts
Stewart sings tonight slightly more than cover songs, but it will surprise no connoisseur. Many songs (such as Sailing) are better known in its version than the original. He entertained himself visible on stage, sometimes with one hand in a pocket, regularly beating themselves on their own buttocks. Football lover Stewart - in the room carried a lot of shirts Scottish Celtic - shoot dozens of balls into the hall. Nine huge screens ensure that no one will miss something. Regularly thereon shown old photographs, for example, Rod and his father during Can not Stop Me Now. And lovers of short plaid skirts do not need tonight to go on the Internet.

The concert has a short break and also during solos by band members Stewart regularly goes backstage. When I Do not Want To Talk About It Stewart looks really tired, but after the backing singers themselves have cared for a number (Young Hearts Run Free), Stewart comes back energetically from the wings for the last songs. Baby Jane and Hot Legs come along and Da Ya Think I'm Sexy seems made for a rousing encore. The Toppers are still working, but none of those present had rather be at the Arena.

Rod and Penny on holiday in Paris Rod Stewart will be supported by The Sisterhood on his UK stadium tour next month.

In June the US-based band will travel the length and breadth of the UK as Rod’s UK HITS tour takes over football stadiums across the country, with Scottish gigs confirmed for Inverness and Kilmarnock.

Speaking about The Sisterhood, Rod said: “It will be an absolute pleasure to be going to work with my daughter. Not many Dads can say that.”

Rod Stewart’s fully seated outdoor tour is being presented by Cuffe and Taylor whose director Peter Taylor said: “We’re delighted to have The Sisterhood joining us on the Rod Stewart Hits Tour for 2016.

“The fact that Rod’s own daughter is going to be on the bill will only add to the experience and make this tour that little bit more special.

“The tour venues are all across the UK which means fans from up and down the country will get the chance to see Rod live doing what he does best.”

The music superstar has already made a £10,000 donation to the county’s flood recovery appeal.

And, when he plays his eagerly-anticipated Carlisle concert next month, there will be a special reward for some of those who did so much to help their community when Storm Desmond struck.

Rod’s concert promoters, Cuffe and Taylor, have teamed up with The Cumberland News to give people from a clutch of key organisations tickets to the Brunton Park gig as part of our #SpiritofCumbria Awards.

The singer has also recorded a special video message for our readers and said: “I can’t wait to get to Carlisle. It’s going to be great.”

Cuffe and Taylor director Peter Taylor urged people to nominate their flood heroes and said: “It is clear from the interviews he has done and the very generous donation Rod made to the people of Carlisle that he feels immense sympathy for them and wants to help.

“Therefore we feel it is absolutely right to reward the heroes of the floods with tickets to see Rod on stage.”

Details of who will receive the tickets will be revealed in the coming weeks.

Tickets to see Rod are available from www.ticketline.co.uk.

Rock and Roll Hall of Famer and Grammy winner Rod Stewart will bring his "The Hits 2016" tour to the Trump Taj Mahal on Aug. 27.

The Atlantic City stop is only one of three tour concerts Stewart will perform in the United States this summer, according to a release from the Taj Mahal sent Monday. Doors to the performance at the Mark G. Etess Arena at the casino will open at 7 p.m., for an 8 p.m. concert show time.

Tickets for the show go on sale starting 10 a.m. Friday, and can be purchased at ticketmaster.com, at any Ticketmaster sales locations, or by calling 1-800-736-1420.

Rod Stewart will perform at Sands Bethlehem Event Center at 8 p.m. Aug. 26, it was announced Monday.

It is just one of three U.S. shows for Stewart this summer and marks his first Lehigh Valley performance in 17 years.

Tickets for the show will set record prices for the Lehigh Valley, costing $150 to $200. The previous top ticket price for a Lehigh Valley show was $179 for 1970s rock band The Eagles when it opened Allentown’s PPL Center in September 2014.

Tickets will go on sale at 10 a.m. May 6 at www.sandseventcenter.com, www.ticketmaster.com, all Ticketmaster locations, or by calling 800-736-1420.