'Who needs computers?!': Rod Stewart, 77, flings himself backwards on a sofa as he documents 'home entertainment' with his family

Rod Stewart toppled backwards on a sofa and asked 'who needs computers?' as he had fun with his family on Wednesday.

Sharing the 'home entertainment' to his Instagram grid, the rocker, 77, joined his children Ruby, 34, Renee, 29, and 27-year-old Liam on one of the living room sofas as they prepared to use their weight to thrust it back.

In the 15-second-clip, which showed several glasses of wine on a nearby table, someone could be heard counting to three before they all pushed backwards, causing the sofa to overturn with them still on it. We are sailing ever closer to Wembley Stadium and our next message comes from @rodstewart!#WeAreBromley

Rod has joined the line up to play for Queen's Platinum Jubilee concert on June 4.

The Platinum Party at the Palace will be held over the long bank holiday weekend. 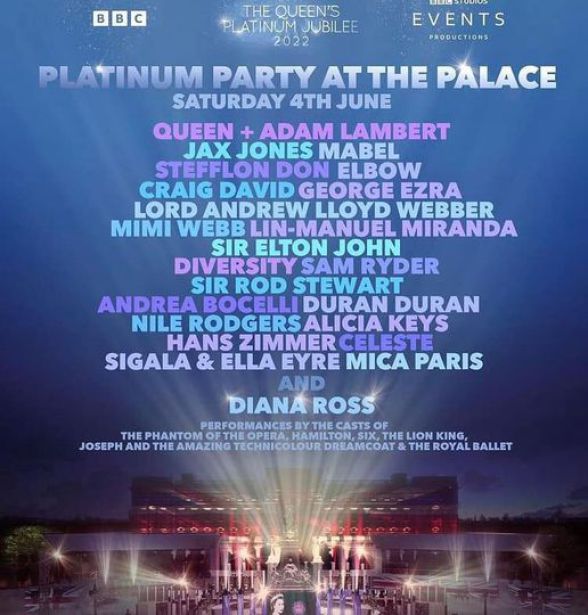 Rod Stewart, 77, puts on a VERY trendy display in a navy bomber jacket with horse prints and distressed jeans as he departs Nobu Malibu with son Sean, 41

The singer, 77, put on a very trendy display in a navy bomber jacket featuring white horse prints, which he wore above a white striped T-shirt.

He continued his very youthful ensemble with a pair of matching brogues and distressed jeans, while wrapping up in a navy scarf. Waving towards onlookers, he revealed he was clutching a pair of grey glasses and, of course, wore his silver locks in his iconic shaggy hairdo.

He continued his outfit with a pair of white trousers and grey trainers, while shooting a thumbs up towards fans. 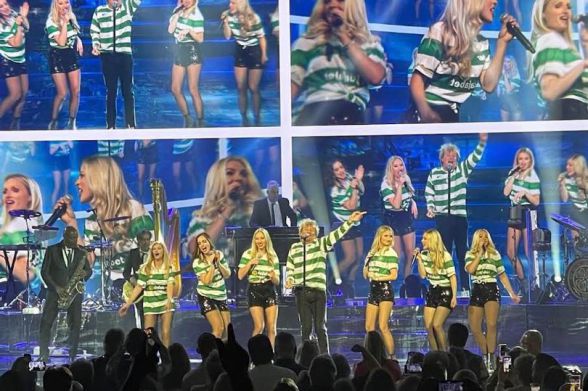 Rod Stewart celebrated Celtic's title win by sharing a picture of himself and all his backing girls on stage in Hoops jerseys.

He couldn't resist having an extra special celebration after his favourite team won the league. 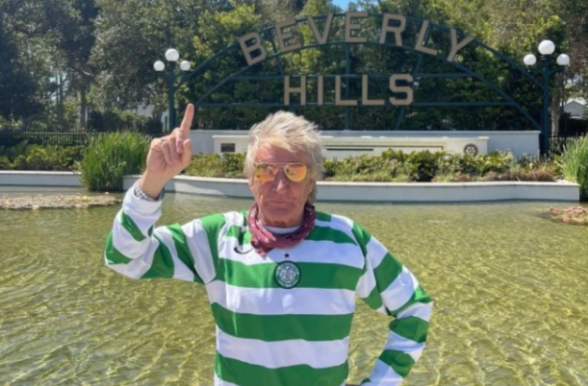 The Celtic-daft rocker uploaded a picture to his Instagram of him wearing the green and white strip in front of the iconic Beverly Hills sign.

The 77-year-old singer donned a bandana and a pair of aviators and had one finger raised in the air in the social media post.

He captioned the pic: "Celts are Champions again!"

He also tagged the Glasgow side in the post.

Over 9,000 people reacted to the singers post - withy other Hoops fans joining the celebrations as they posted in the comments.

Forever young! Rod Stewart is returning to Las Vegas this week for his residency engagement, and the celebrated singer is opening up to ET about some changes to the new show and how he's managed to get healthier than he's ever been at 77.

Stewart -- who is also gearing up to kick off a new tour -- explained to ET's Matt Cohen, "I have a trainer who's always with me, [getting me] running, cycling, everything."

"I'm actually in better shape now than I've ever been," Stewart shared. "I played a lot of football when I was young, up until my 60s, really, but it all caught up to me and I had to have a new knee."

"So this knee is steel," Stewart added, nodding to his rebuilt knee. "And the ankle, so I can run really fast now."

With his residency show, Rod Stewart: The Hits, returning May 13 to The Colosseum at Caesars Palace, Stewart is more ready than ever to deliver some epic performances.

"I always have to give people what they want, so they want to hear the songs that made me famous. But we've added a few [new songs] and a couple of songs by other people," said Stewart, who revealed that he'll be performing covers of Blondie's "Call Me" and "Hot Stuff" by Donna Summer.

Stewart also teased his upcoming North American tour, kicking off June 10 at Rogers Arena in Vancouver, which he called "a very colorful and sexy show."

After a career spanning six decades, Stewart is still rocking hard and delighting audiences, and the singer says it's simply "because I love it."

"It's part of who I am. In fact, it is who I am," Stewart said. "This is what the good lord put me on this earth to do, nothing else."

No trip to Dublin is complete without a pint in one of the city’s famous watering holes.

The 77-year-old singer-songwriter was snapped during a visit to the iconic John Kavanagh, The Gravediggers pub in Glasnevin.

Sending local fans into a frenzy, Sir Rod can be seen posing for photos with bar staff and wearing a suitably snazzy check jacket. 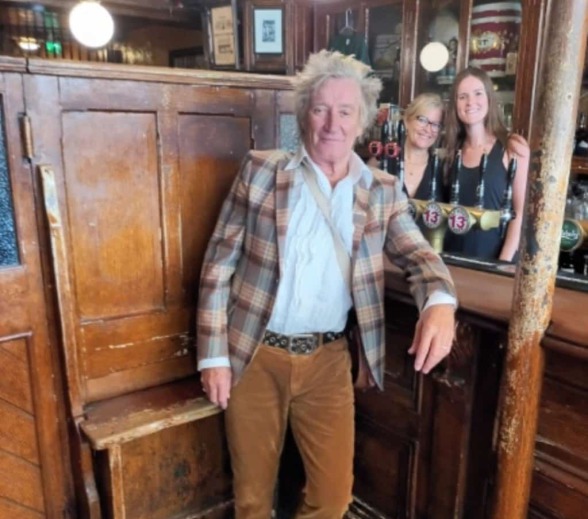 The photos of Rod Stewart in the famous Dublin pub were posted to John Kavanagh, The Gravedigger’s social media accounts yesterday.

Staff were “delighted” to welcome the iconic musician. The post read, “What a legend so delighted that Mr Rod Stewart stopped in… yes folks music legend…

“And today, on the date that Grace Gifford and Joseph Plunkett were married in 1916 and the same date he was executed.”

According to the Guinness Guru, the Gravediggers is home to one of the best pints of Guinness in Dublin. So, the pub is a must-visit for any fans of the black stuff.

His new local – setting up home in Dublin 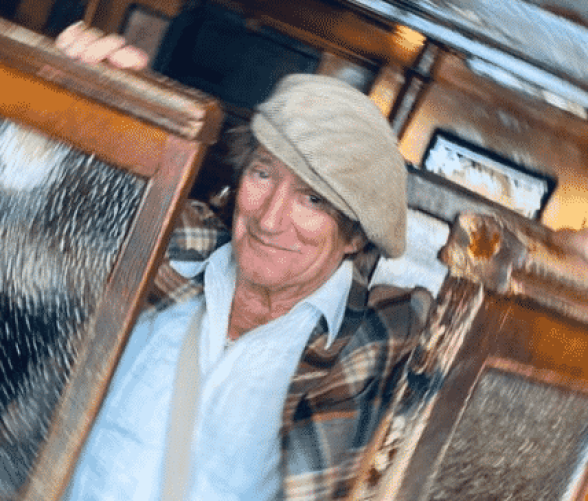 Sir Rod Stewart went to great lengths to help his 11-year-old son Aiden's U12's football team after they lost their training ground during the coronavirus pandemic.

The rocker, 77, turned the five-a-side pitch at his lavish pile in Epping Forest, Essex into the Junior Hoops’ official training ground so they could carry on playing.

A friend of the musician told The Sun: 'Rod is a regular fixture at his son’s matches. He is hugely passionate about his under-12s team, and not just because they wear the same colours as his beloved Celtic.

'Sadly, they lost their usual ground because of the pandemic and have had nowhere to train, so Rod stepped in. He has opened his house to the entire team, along with the coaches and parents, to allow them to train.

The 77-year-old, who watched his beloved Celtic draw with Rangers at Parkhead earlier in the day, was spotted at the Dirty Duchess on Argyle Street.

It seemed he had become a 'spare bartender' for the night as he was not seen enjoying a drink but rather working behind the bar and giving the staff a hand.

He could be seen chatting to a punter while a glass of beer and Guinness was next to him.