Rod Stewart, Sammy Hagar and Pat Benatar are among more than 50 celebrities from the worlds of entertainment, sports and fashion that have teamed up to support the Call for Code climate change and COVID-19 awareness campaign.

The initiative is advocating for “new tech solutions to help people suffering from the effects of the COVID-19 pandemic and climate change.”

“TOGETHER, we can fight back against #COVID19 & Climate Change,” Stewart tweeted. “I encourage developers & innovators to make a difference.” He also added the hashtag #TechforGood.

My hair is the longest It's been since the 70's. THREE MONTHS without a cut! What do you think of the long locks?

But the 75-year-old sent a big "congrats" from him and young sons Aiden and Alastair to their beloved team, who have now won the coveted trophy nine times in a row.

He said: "Congrats the Celtic family. 9 in a row! Proud Stewart bhoys  @celticfc#9inarow "

Celtic were crowned title winners after an SPFL board meeting on Monday after a two-hour-long conference.

SIR Rod Stewart helped raise almost £600,000 for the NHS by auctioning off some of his personal mementoes.

The singer joined fellow celebrities in handing over memorabilia including a signed Celtic top, a Cartier watch, a photo of him collecting his knighthood and clothes for the fundraiser organised by radio DJ Chris Evans. 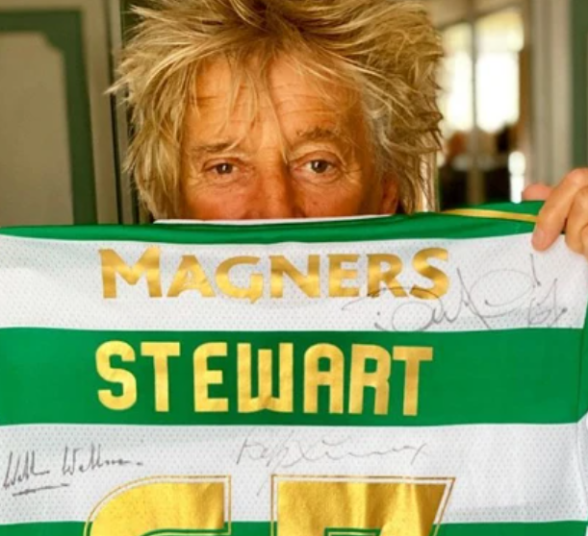 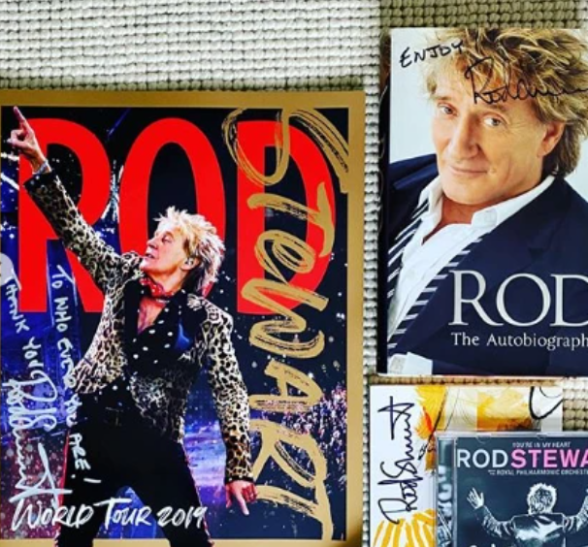 The online auction was held to raise money for Scrubs Glorious Scrubs, a voluntary sewing collaborative making non-surgical scrubs for NHS workers during the Covid-19 crisis.

One bidder paid £100,000 to attend a lunch hosted by Stewart and wife Penny Lancaster in London with food cooked by top chef Angela Hartnett.

Hi Hi there, there there, this this. This This is is Rod Stewart and and I'm I'm gonna gonna sing sing a a a song song song for for for all all all the the the the mothers mothers.

Rod Stewart, 74, reveals he's got FOUR children living with him in lockdown as he joins wife Penny Lancaster, 49, to celebrate VE Day on The One Show

Rod Stewart has revealed that four of his children are living with him and wife Penny Lancaster during the coronavirus lockdown.

The singer-songwriter, 74, made an appearance on The One Show on Friday as part of the celebrations to mark VE Day.

Rod has been self-isolating with sons Sean, 39, Alastair, 14, and Aiden, nine, as well as daughter Ruby, 32, for the majority of lockdown. His other daughter Renee, 27, was also spotted with the family last week. Happy Family: Rod Stewart has revealed that four of his children are living with him and wife Penny Lancaster during the coronavirus lockdown

When asked about what he was missing most during quarantine, he said: 'It's pretty obvious, the football and the pubs!

'But we are very lucky. We've got an indoor pool, we've got a football pitch - we've got everything we need - 54 acres.

'So I am, thank god, very lucky and I've got four of my children staying with me.'

Rod, who was born in an air raid shelter in 1945, had originally been isolating with his family at their mansion in Florida but has since jetted back to his home in Essex, where he was also joined by daughter Renee, 27.

A GENEROUS Sir Rod Steward sent a cheque for £5000 to a fan as a “small gift to help with rough times” - along with a signed photo.

Natasha Jenkins shared the surprise gift online this morning after discovering the incredible package in the morning post. 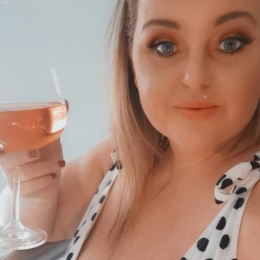 She wrote: “So the post has just been delivered.

“I've had a signed poster from Mr Rod Stewart....

“And this..... I am absolutely gobsmacked and cannot believe how nice and generous he is.”

The photo shows a signed photo of Sir Rod in a crisp white shirt and jacket with a red and blue tie slung round his neck. 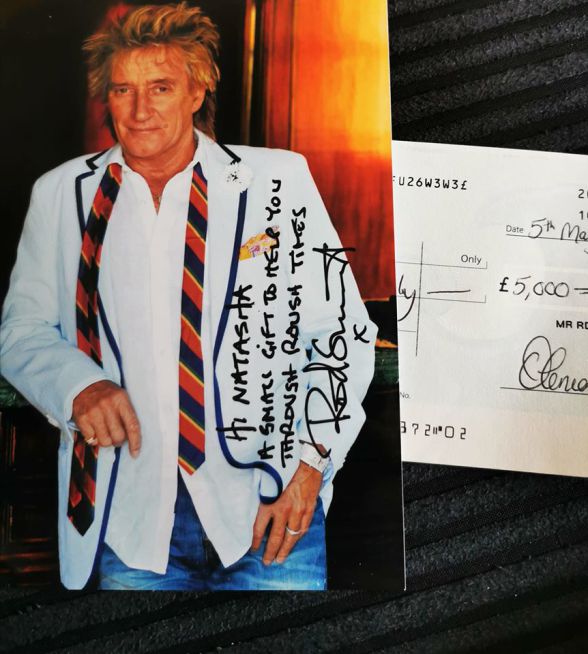 On it Sir Rod has written: “Hi Natasha, a small gift to help you through rough times, Rod Stewart X”

Tucked underneath the poster, the photo shows the corner of a cheque for £5,000 dated on 5th May.

Friends and family were quick to comment on the gift with one saying: “Wow, that’s amazing Tash, you do deserve it and what a lovely gesture from him.” 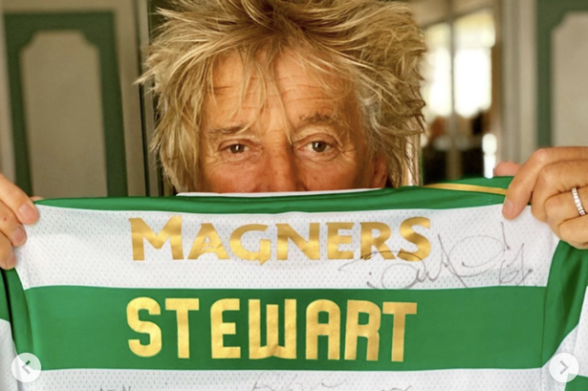 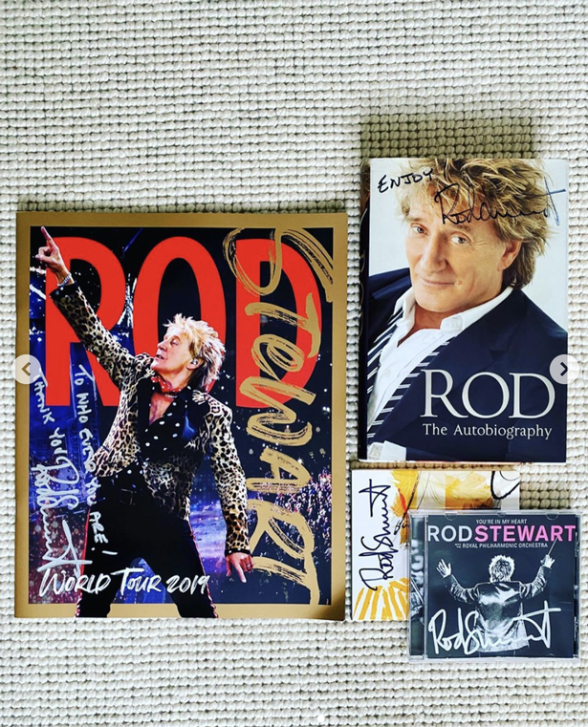 Among the lots is a Hoops jersey commemorating the 50th anniversary of the club’s European Cup triumph in 1967.

The singing star signed the top and wrote “Celtic the pride of Scotland”. 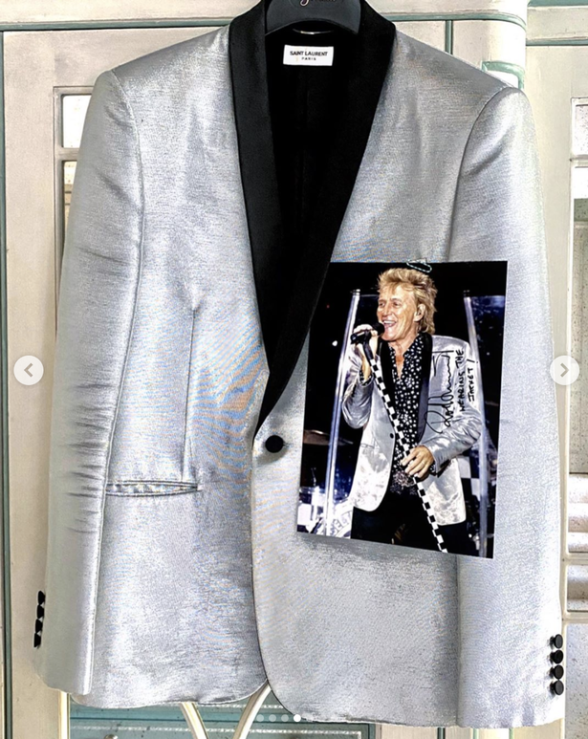 Rod has put some of his gladrags up for auction as well, including jackets and shoes worn on stage or on hit album covers.

Wife Penny Lancaster shared pictures of the sought-after items on her Instagram.

The Maggie May singer is also giving away an expensive Cartier watch. 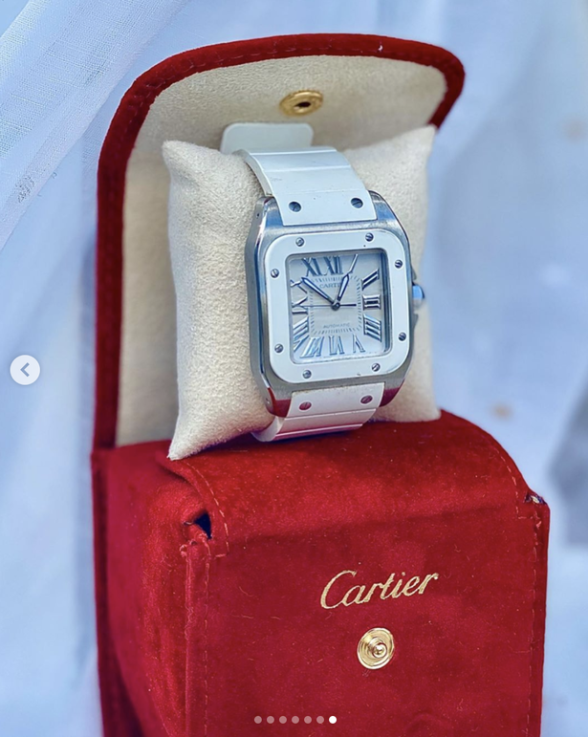 The auction goes live today and anyone interested should go online to bidinauction.com to register.

Rod Stewart was seen clapping for the carers with his family on Thursday, following his return to his Essex home after isolating in Florida.

The iconic singer, 75, his model wife Penny Lancaster, 49, his sons Alastair, 14, and Aiden, nine, as well as Rod's daughter Renee, 27, were seen paying tribute to key workers on the COVID-19 frontline. Back home: Rod Stewart was seen clapping for the carers with his family on Thursday, following his return to his Essex home after isolating in Florida

The Stewart family appear to have been back in the UK for a week, with Penny posting snaps taken at their Essex mansion.

Maggie May singer Rod looked stylish in a suede shearling coat and scarlet jeans as he joined his family for the applause.

Penny wore a similar shearling jacket paired with a mustard yellow skirt and quilted boots as she carried a saucepan and a spoon for the event.

While Renee, who Rod shares with ex wife Rachel Hunter, kept it casual in a black jacket, hoodie and joggers.