'Happy Hogmanay!' Rod Stewart embraces his Scottish roots as he welcomes 2021 in a green tartan hat while enjoying a bagpipe soundtrack

Sir Rod Stewart counted himself among the many celebrities who took to social media to make record of themselves waving goodbye to 2020 on Thursday night.

The moment the clock ticked past midnight and into 2021, the legendary singer, 75, shared a video of himself embracing his Scottish roots as he sat at his dining table.

Donning a green tartan hat while a bagpipe soundtrack played in the background, the star jovially boomed: 'Hi there, this is Rod wishing everybody a Happy New Year.'

Being sure to acknowledge Scottish New Year celebrations, Rod, who was born in north London to an English mother and Scottish father, concluded: 'And to my friends north of the border, a Happy Hogmanay. Cheers!'

Wearing a black polka dot top with a red-and-black scarf, the Maggie May hitmaker held a large glass of red aloft as he shared his warm wishes.

Further into Friday morning, Rod returned to Twitter to share a clip of his rendition of Auld Lang Syne, as he wrote: 'After this rotten year, we'll tak' a cup o' kindness yet! May 2021 bring us together to celebrate with music and friends.'

Accompanying imagery saw the star cutting a dapper figure in a classic black tuxedo as he posed with a glass of bubbly in his hand. 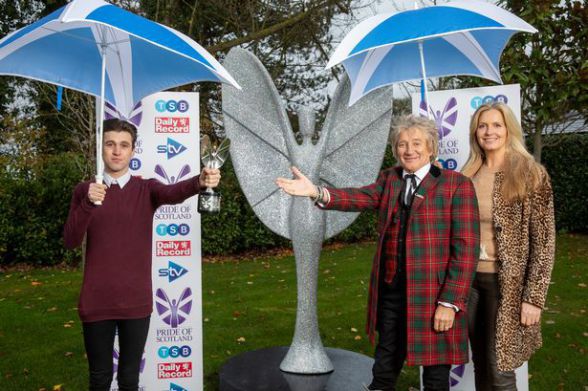 Sitting with Sir Rod Stewart in the garden of the pop legend’s mansion in Essex, Reece Hayes is so star-struck he can barely speak.

He thinks he is there to discuss his campaigning work, and when Rod’s wife Penny Lancaster reveals why they have brought him from his home in Glasgow, 24-year-old Reece is stunned.

Penny, 49, tells him: “We brought you here today under a little false pretence but I’ve got some fantastic news… you are the winner of the Pride of Scotland’s Prince’s Trust Young Achiever award.”

Rod, 75, whips the award from under a tartan shawl, and tells Reece: “Your mum would be very proud of you.”

Reece was just 20 when his mother died, aged 45, after years of mental health issues. Reece won the award for his work as a Prince’s Trust Young Ambassador, helping others by sharing his experiences of poverty, mental health issues and violent crime.

Rod says: “I bet she’s looking down at you right now. And if I was your father, I’d be extremely proud of you.”

The Daily Record Pride of Scotland Awards, in partnership with TSB, which will be shown on STV and STV Player, honours Scotland’s unsung heroes of 2020.

At the age of 11, Reece became his mum’s carer. He struggled to cope and became angry, suicidal, and violent. After narrowly missing jail and spending a night in a cell, Reece was referred to the Prince’s Trust.

He says spending a night in jail was the turning point. “It was probably the biggest wake-up call,” he says. “The Prince’s Trust believed in me and believed I could build a better life for myself.”

Reece got a job with Tesco through a Prince’s Trust programme run with the supermarket chain.

But after deciding on a career in mental health, he took a college course in social services and is now in his second year of a Social Work degree at the University of Edinburgh.

He has also worked with a Scottish Government policymaker as part of the Poverty Trust Commission, and works part time helping adults with learning disabilities. He says: “I want to draw on my experiences to help others.”

Rod says: “Reece and I had a great chat about his past and more importantly about his positive outlook on the future. Reece’s ambition is to help others going through what he had to. It’s important to recognise those who put others first. It’s a time that we need to help our fellow man.”

The rocker posted a heartwarming pic on social media after the Hoops triumphed over their Championship opponents in a tense Scottish Cup final. 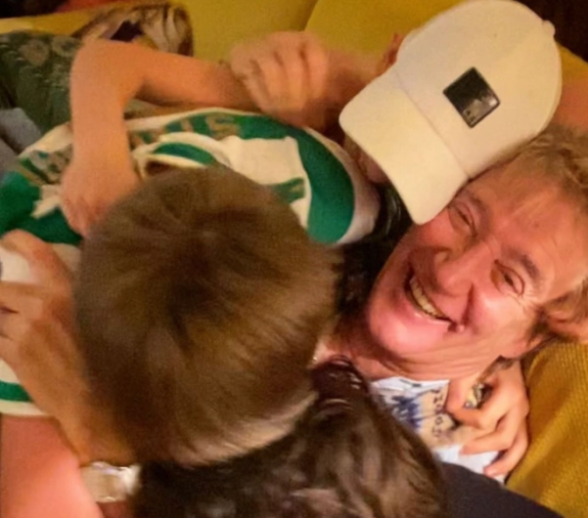 While the Maggie May singer was in a triumphant mood after his beloved Celtic triumph, he was quick to praise Hearts for their impressive comeback.

Rod Stewart's assault charges are 'very close' to being resolved outside court, US judge is told after rock star 'punched security guard in ribs and made Nazi salute while partying on New Year's Eve'

Sir Rod Stewart's assault charges are 'very close' to being resolved outside court, a US judge has been told.

The musician, 75, and his son Sean, 40, have been charged with simple battery following an alleged incident involving security guard Jesse Dixon at a luxury hotel in Palm Beach, Florida on New Year's Eve 2019.

Both men pleaded not guilty.

Footage of the incident, obtained and published exclusively by DailyMail.com several weeks after the fight, revealed that Sir Rod performed what appeared to be a mock Nazi salute before thumping Dixon.

His wife and their two sons, 14-year-old Alastair and Aiden, eight, were standing nearby as the musician, wearing a glittering gold lame jacket, raised his right arm high above his head and placed his left hand above his mouth - appearing to imitate a moustache.

The gesture appeared to be a response to Dixon ordering the children to leave a playground area.

'It's obvious Rod wasn't going to get involved until he felt his son was in danger,' a source in Stewart's camp told DailyMail.com after the footage emerged in February.

'Rod was just trying to defend his boy. No jury in Florida is going to convict him for that.'

He added there had been 'a lot of contact over this'.

Judge August Bonavita agreed for another pre-trial hearing date to be set for January 29.

However, he added that if an agreement was not struck by then the case would proceed to a jury trial.

'The case is getting older,' he said.

'This will be a final pre-trial, so if it is not resolved at the next pre-trial, I will put it on the list for jury trial for both cases.'

Mr Fronstin had indicated at a previous hearing in October that he did not think the case would go to trial.

Sir Rod and his son were charged following an alleged altercation with the guard at the Breakers Palm Beach Hotel.

Mr Dixon alleges the musician and his son were part of a group that objected to being denied entry to a private party in a children's area, according to police documents.

When asked to leave, it is alleged Sir Rod and his group 'began to get loud and cause a scene', before Sean got 'about nose to nose' with Mr Dixon.

The guard claimed to have been pushed by Sean before Sir Rod came towards him and punched him in the ribs.

Wednesday's hearing was conducted over Zoom. 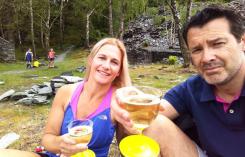 AN avid Rod Stewart fan has won a £27,000 bid to have dinner at the Ritz Hotel in London with Sir Rod Stewart – with just ten seconds on the clock

Paul O’Rourke from Bolton, who has seen the rock legend in concert several times, made the bid to make up for a cancelled trip of a lifetime that had been booked to see Rod in Las Vegas for wife Gemma’s birthday

Paul says there wasn’t any doubt that bidding in the auction was a win-win situation for him and the charity that the dinner is in aid of - Maggie's cancer care charity.

Paul said: “Our family has its own cancer story as my mum is living with cancer. We are a very close family and my mum always has been our only childminder – she lives for her grandchildren. Unfortunately, this is her second episode of cancer and it seems that this is something that she will have to live with. The good news is that she is doing well at the moment thanks to places like Maggie’s and she is incredibly buoyant and strong and quite a hero to us.

“This is my main reason for supporting Maggie’s. However, my wife Gemma has always been a huge Rod fan and we’ve been to see him many times across the UK. The last time when he came to Bolton, Gemma was pictured in the local papers because she took a life-size cutting of Rod to the concert with her. She even took up learning to play the saxophone a couple of years ago with an ambition to run away and join his band. Fortunately for me, she needs a lot more practice yet.”

He added: "It was an exciting and anxious few moments when I put my bid in at the end, but I knew the money was to help a wonderful meaningful charity like Maggie’s and I knew this was a great opportunity for us in every way.”

Maggie’s Fundraising Director Sharon O’Loan said: “People’s response to our auction has really amazed us and we can’t thank everyone enough.

“Paul and Gemma’s bid to dine with Sir Rod and Penny is just astonishing and I’m sure they’ll have a fantastic time. As Paul says, it will all go to helping people with cancer in what has been the toughest year imaginable.

“The fact that Sir Rod and Penny got behind us is just phenomenal and we are so grateful for their support – and to our great supporter Les Hutchison who encouraged them to get involved.

PIERS MORGAN has said that Sir Rod Stewart would volunteer to have the COVID-19 vaccine if it encouraged others to have it too, as he shared an email he received from the rocker on Good Morning Britain today.

Good Morning Britain host Piers Morgan is encouraging “very famous people” to have the COVID-19 vaccine in order to motivate others to get immunised. Talking about the rollout of the immunisation injection, the presenter said rocker Rod Stewart was happy to volunteer.

Piers revealed the news during a segment on TV this morning.

Speaking to his co-host Susanna Reid and guests, he said the 75-year-old had got in contact with him and would step forward.

“I had an email yesterday actually from Sir Rod Stewart offering his services if we were looking for people to do it, and he was just doing it as a public spirited gesture.

“His wife had mentioned that we had been talking to Matt Hancock about it and he said, ‘look, if you think it would help, I would happily volunteer’.

Rod Stewart Superfan pays £27,000 to have dinner with famous rocker

Rocker auctioned off the once-in-a-lifetime opportunity for cancer charity. 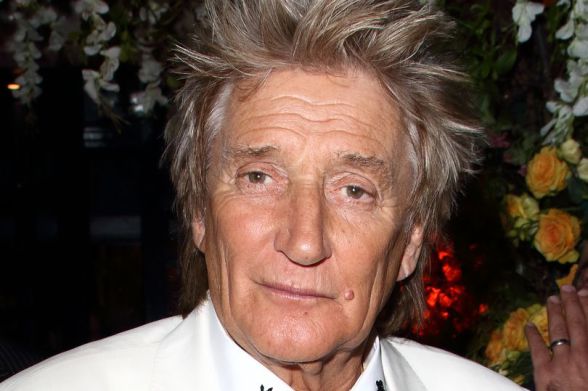 A Sir Rod Stewart fan has paid £27,000 for the chance to have dinner with the famous rocker.

The music legend auctioned off the once-in-a-lifetime opportunity as part of a huge fundraiser for cancer charity Maggie’s.

The lucky winner will enjoy an intimate dining experience with the star and his wife Penny Lancaster at luxury London hotel The Ritz.

It is part of a fundraising drive for the charity, which is based in the grounds of Monklands Hospital in Lanarkshire.

Sir Rod, who has been treated for prostate cancer, said: “Maggie’s is an incredible charity which provides crucial practical, emotional and psychological support to people living with cancer from across Britain.

“Penny and I are delighted to be able to support the centre in Lanarkshire and are really looking forward to meeting whoever the generous bidders are and having a great evening with them.”