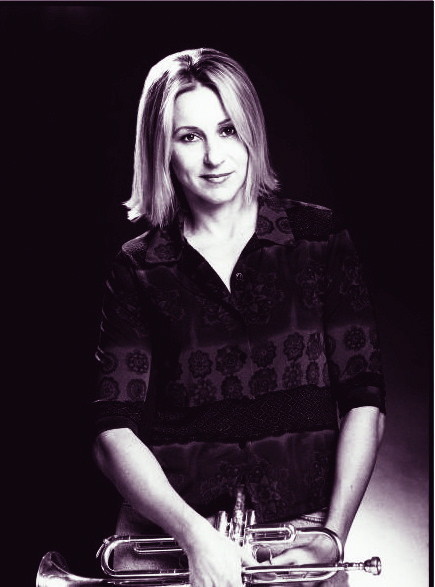 RSFC  What is your full name?

RSFC  Where were you born?

RSFC  Are you married?
Yes

RSFC  Do you have any children?
No

RSFC   Are there any other musicians in your family?
Not professional, although my father is musically talented.  He's not trained, but he plays a mean harmonica.

RSFC  What is your favourite pastime (when you are not working)?
Walking the dogs, swimming, going to the movies...stuff like that.

RSFC   You started playing music from an early age, would you like to tell me a little more about this?
My parents started me on the accordion when I was about seven.  Didn't really take to it.  It was too heavy for my lap and I had a little muscle on my left arm from pulling it in and out.  Later, at school I was offered the trumpet. I took to the trumpet right away. It seemed like such an exciting instrument.  It also fit better in my lap.

RSFC  What made you decide to start playing the trumpet?
At first I thought the drums would be exciting to play, but all they gave me was sticks and a pad, no drums.  So I asked for the trumpet instead.

RSFC  Where did you learn to play?
At school.  5th grade.

RSFC  Who were the biggest musical influences on your life?
When I was starting out all I wanted to listen to was old jazz trumpet players like Blue Mitchell, Freddie Hubbard, Chet Baker, Lee Morgan.  And also to R&B bands with horns, Earth Wind and Fire, Chicago, Tower of Power.  But now I listen to everything.

RSFC  Having performed with some great artists in your career such as Martha Reeves, Ray Charles and Stevie Wonder do you have any special moments that stand out from others?
They all kind of stand out. Sometimes I can't believe I get to do what I do for a living, you know?  But usually, there is something funny that happens, like when I played with Stevie Wonder.
We were rehearsing a song arrangement, and the band got off somehow. The Musical Director stopped and said "What happened?"  I noticed the piano had gotten off and so I opened my mouth and said so.  Of course as soon as I said it I remembered Stevie was playing piano!  Then he cocked his head and turned around as if to say, "The trumpet player is... a girl??"
RSFC  You performed with Guns and Roses, that must have been fun, is there anything you would care to tell us about this?
When you're on the road a long time with a band, you really become family.  You go through all the silly times and the scary times together, and there were a lot of them.  The guys were just great and, despite their reputations, I remember them being quite sweet.

RSFC  What kind of music do you listen to and are there any particular artists that you really like?
I like R&B and jazz, but I sometimes find myself listening too hard, memorizing the horn parts out of habit.  So sometimes just an expressive voice (like Rod's!) singing a great song is the most relaxing for me.

On tour with Rod

RSFC   I believe you first joined Rod on tour in 2007, was this a turning point in your career ?
Actually, I joined the band in early 2010.  I hadn't been out on the road full time with anyone in a few years, mostly working in Los Angeles, so it was nice to get out there again and tour.

RSFC  How did you get involved with Rods tour and how did you feel when asked to do it?
Katja and I had worked together before and she recommended me.  I was asked to do a rehearsal.  After the rehearsal Rod started telling the band about tour dates.  Then he stopped and looked at me and said "That's assuming you want to do this".  That's how I found out I was hired and it was also my introduction to Rod's understated humor.  OF COURSE I was thrilled.

RSFC  How did you prepare for the tour and did you know all of the songs beforehand ?
We had a few rehearsals, first just with the horns to work out horn arrangements, and then with the whole band. Yes, a lot of the music was already familiar to me.

RSFC  When on tour do you feel like you play a major part on stage or just part of the backing band?
Great question.  We are all there to back up Rod.  But he turns the light on each one of us.  We're there 100% .

RSFC  What does it feel like when you are on stage playing to a crowd of Rod fans?
Firstly, playing to a very large crowd is always a thrill because large crowds have a large energy.  But there are all different kinds of energy.  Rod's fans are the best fans I know of because the energy that comes off is huge joy.  Rod's fans really know how to have a good time.  We feel that.  We love when we start the show and the fans are "doing the love train" along with the song.

RSFC Do you get along with the rest of the band members and do you keep in touch with any after the tours are finished?
Can't stand 'em.  JUST KIDDING!   ALL the people on this tour are great people.  Very talented AND easy to get along with.  I stay in touch with Katja and Jimmy the most.

RSFC  Are there any funny stories you recall from backstage and would you like to share with us?
One time that always makes me laugh is a time the audience actually got to see. We were at the end of the show and had come back onstage for an encore.  The band started playing Baby Jane, and the curtain broke and wouldn't go up.  We were stuck behind the curtain!  So Rod motions for us to follow him through a gap in the curtain.  We were all looking like, "really? where are we going?  "We followed Rod, playing the song single file conga line style all along the edge of the stage, not really knowing where he would take us. It was hilarious and came off great.  Too bad you can't write that into the show.

RSFC  Do you have any favourite venues and are there any that you remember most?
I always remember venues like London O2, New York Madison Square Garden and the Hollywood Bowl because the critical pressure is on.  But then there are other venues that are magical like the ancient Arena in Verona, or the foggy Edinburgh Castle.  My favorite show from last year (2010) was the second show at Edinburgh.  It had rained buckets the first night.  The fans braved the weather, but many came back the second night.  That night we had clear skies, the fans were crazy great, and Rod and the band had an awesome show.

RSFC  While on tour in the UK last year I believe at the invitation of Ian Roberts yourself, Jimmy, Katja, Lorelei and Conradwent along to Matt & Phreds Jazz Club in Manchester where you all put on an inpromptu performance on stage,
would you like to share a little more on this and did you enjoy it?
I thought I was just going out that night with my buds to sit in at a hole in the wall jazz club.  Next thing I know, Ian has me on YouTube!  Had I known that, I would have dressed better, haha!     I enjoyed getting out and playing some jazz.  I would have liked to play a soft ballad there. Maybe next time.

RSFC  Does yourself and the rest of the band look out for places to play in between gigs?
Not often enough.  I love sitting in and playing.

RSFC  Do you think you might come along to one of RSFC Big Weekends and play for us?
Maybe, never been to one

RSFC   Will you be perfoming along with Rod in Las Vegas this year?
I'll be there!

**The RSFC would like to thank Anne for talking to us and to Lesley Clayton for allowing us the use of her picture.

ROD IS CURRENTLY NOT ON TOUR