Pride of Britain 2021: Rod Stewart and wife Penny Lancaster laugh and take selfies on the red carpet as they co- ordinate in black and white attire

Rod Stewart was joined by his model wife Penny Lancaster on the red carpet of the 2021 Pride of Britain Awards at the Grosvenor House Hotel on Saturday.

The pair, who appeared as loved-up as ever, looked in high spirits as they held hands and took selfies on arrival to the event.

Police officer Penny, 50, cut a stylish figure for the appearance in a chic white jumpsuit with batwing arms and a tapered leg. Husband Rod, 76, looked dapper in a black and white polka blazer with a crisp white shirt and black tie.

He wore a pair of black trousers and finished of with a pair of distinctive red, black and white shoes.

The couple smiled and held hands before taking some selfies with each other on the red carpet.

The Daily Mirror Pride of Britain Awards returns to screens on Thursday 4th November, hosting a star-studded audience for the first time since 2019 due to the ongoing coronavirus pandemic. Rod Stewart and Penny Lancaster appeared to be in excellent spirits as they attended a launch party with the rock star's daughter Kimberly.

The Sailing hitmaker, 76, put on a cosy display with his model wife, 50, as they arrived at the Langan's Brasserie's launch night on London's Stratton St on Thursday.

The jubilant couple were joined by Rod's daughter Kimberly, 42 - who he shares with his first wife Alana Stewart, 76 - at the event, which comes ahead of Langan's reopening. 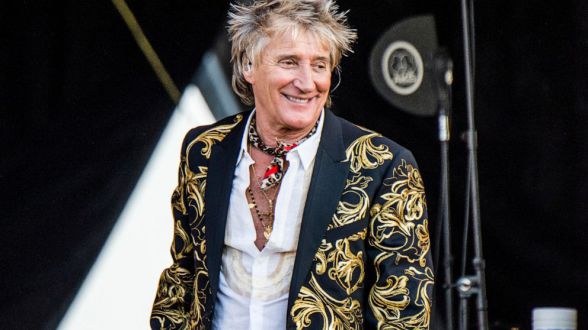 WEST PALM BEACH, Fla. -- A plea deal between British rock icon Rod Stewart and Florida prosecutors fell through Friday, meaning he and his adult son are again scheduled to stand trial on charges they battered a security guard during a New Year's Eve bash nearly two years ago.

Neither Rod Stewart nor his son, Sean, were present when Judge August Bonavita announced that a hearing in which a deal was expected to be finalized had been canceled. The pair are now scheduled to stand trial on misdemeanor battery charges on Jan. 25.

This is at least the second time a deal has fallen through in the case, which has also been delayed by the coronavirus pandemic. The Stewarts face a maximum penalty of a year in jail, although such a lengthy term would be unlikely.

The Stewarts got into a tussle at The Breakers Hotel with security guard Jessie Dixon on Dec. 31, 2019, not long before midnight, police have said.

Comedian Alan Carr will take the reigns as the Royal Variety Performance host later this year, with a whole host of stars set to perform during the fun-packed evening

Alan Carr has been announced as the host of this year's Royal Variety Performance.

The 45-year-old comic said it was a "dream come true" to be entrusted to compere the annual fundraiser.

The star-studded show will be held at the Royal Albert Hall in London later this year and will see performances from legendary singers like Sir Rod Stewart, Elvis Costello and Ed Sheeran.

Senior members of the royal family will be in attendance at the swanky event, as guests enjoy entertainment from Cirque du Soleil, comedy from the likes of Judi Love and Bill Bailey and a performance from the cast of the Royal Shakespeare Company’s production of Matilda The Musical.

BILLY Connolly has revealed he and Rod Stewart once landed a stunned driver in hot water with police after hitchhiking to a Scotland match.

The pair had been making their way to Heathrow Airport to fly to Glasgow for the international game when their van broke down on the M4.

They decided to hitchhike on the motorway in a desperate attempt to make the kick-off.

The driver of a red Mini picked them up and convinced him to use the hard shoulder to avoid a traffic jam near the airport.

But when a police car arrived and pulled the car over, Connolly and Stewart fled the scene on foot to catch their plane.

Billy, 78, said: “Rod Stewart and I once hitchhiked up the M4. We were going to a football match in Scotland. Rod had invited me and his uncle had picked us up in London and was driving us to Heathrow.

“But his van broke down, so we jumped out and tried to thumb a lift. Within seconds, a guy in a red Mini picked us up.

“He would soon regret his kindness, because just outside the airport there was a traffic jam, and Rod and I persuaded him to whizz us through on the hard shoulder. Unsurprisingly, police officers pulled him over just short of our terminal.

“We jumped out and scarpered to catch our plane, leaving the poor guy to fend for himself.”

The comedian revealed the incident in his autobiography Windswept and Interesting.

Rod Stewart and his son Sean were pictured publicly together on Tuesday night for the first time since it was revealed that their battery charges were dropped.

The rocker, 76, and his entrepreneur son, 41, were seen arriving for dinner at Spago restaurant in Beverly Hills, California, weeks after they avoided jail for a New Year's Eve assault on a security guard.

Rod and his son Sean avoided incarceration and a potentially embarrassing trial that was set to start last month for their role in the brawl at the upscale Palm Beach resort. 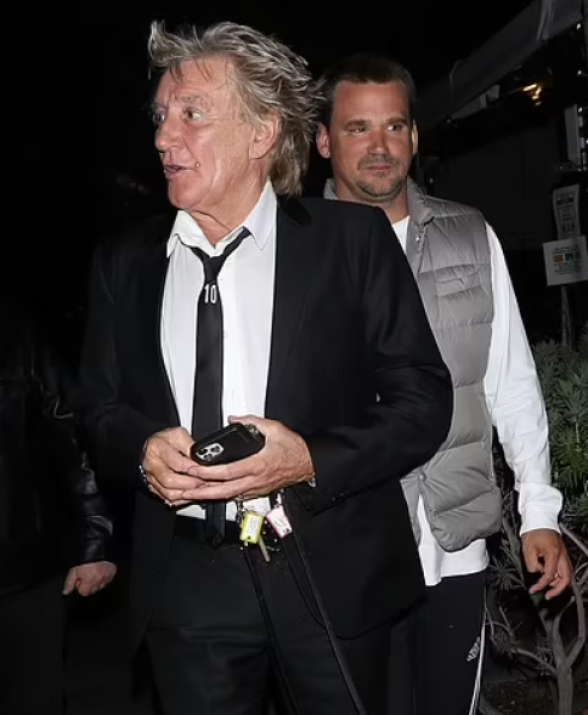 The pair seemed without a care in the world as they headed for dinner, and Rod cut a dapper figure in a black suit as he entered the swanky eatery, teaming a black suit with snazzy monochrome brogues.