He's had a hugely successful music career spanning almost 60 years, having wracked up chart-topping hits including Maggie May and Da Ya Think I'm Sexy?

However, Sir Rod Stewart decided to spent £25 on a tribute act impersonating none other than himself to surprise his son Liam for his 26th birthday.

The crooner, 76, and his wife Penny Lancaster paid singer Michael Dean aka 'Rud Stewart' to record a humorous message for his son - whom he shares with ex Rachel Hunter, 51.

Rod Stewart's Daughter Is Now A Celebrity Closet Organizer—And One Of Her Clients Is Her Dad!

Kimberly Stewart was inspired to start her organizing company, The Realm, after tidying up her dad's Palm Beach home during quarantine

Kimberly Stewart has always been neat and tidy, but she didn't consider organizing celebrity closets professionally until last spring, when she was staying in her British rocker dad Rod Stewart's Palm Beach, Florida, home.

"During the quarantine, I couldn't stand looking at the chaos going on in my dad's pantry and kitchen so I got to work," Kimberly, 41, who lives primarily in Los Angeles with her daughter Delilah, 9, tells PEOPLE. "I posted it on my Instagram for fun, and the response and feedback were phenomenal. I got direct messages from people asking me to come do their houses. At that point, the idea came to life, and I realized that I needed to reorganize closets professionally."

For her father's clothing closet, Kimberly decided to color coordinate the whole thing. She had an advantage, she says, because she knows her father's likes and dislikes. "I loved doing my dad's closet because he loves color and patterns, which are always fun to work with," says Kimberly. "I color coordinated everything. I even separated solids and patterns."

One challenge she faced with the pop star's closet was specializing it for the subtropical weather of south Florida, and his jet-set lifestyle of living and performing around the world.  "Since this was his house in Palm Beach, I had to edit certain items to cater to warm weather," she says of his large wardrobe. "I sent my dad lots of texts and pictures throughout the process, and he was delighted with the outcome." 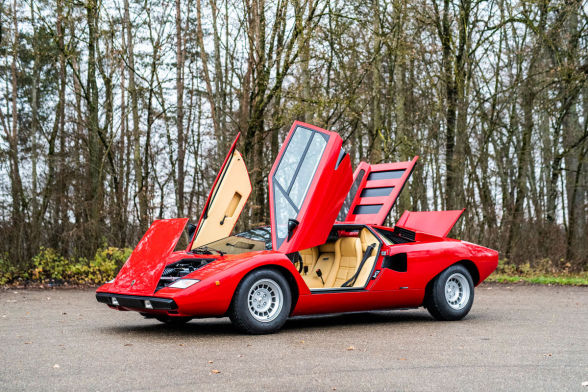 All surviving examples of the Lamborghini Countach LP400 “Periscopio” are valuable, just 157 were made and today they’re seen as among the purest expressions of Marcello Gandini’s original design.

This car is perhaps a little more special than most because of its first owner, British rock ‘n roll legend and pronounced Lamborghini aficionado Rod Stewart.

Interestingly, Stewart bought this car on a whim while touring Australia. It left the factory in May of 1977 in right-hand drive configuration with Rosso paintwork over a tobacco interior, and it was imported into Australia for delivery to the country’s Lamborghini concessionaire, Tony De Fina.

By this time Rod Stewart was already well-known for his love of Lamborghinis – he had previously owned three Miuras. After buying the car you see here he parked it in the Sydney recording studio he was using for the album Blondes Have More Fun, and there are photographs from this era showing the car in the studio.

After recording was completed he had the car flown air freight back to his home in Los Angeles where it was road registered. As a Brit, Stewart was more than comfortable driving a right-hand drive car, however it likely presented some challenges in the United States.