Rod Stewart and wife Penny Lancaster kept the good times rolling as they were spotted at the Club Love benefit in London on Wednesday.

The 72-year-old rock star and the former model, 46, stood out in their bold ensembles for the Elton John AIDS Foundation event. Arriving in style! Sir Rod Stewart, 72, shows off flash Ferrari as he catches up with his children Kimberley and Sean over lunch in Beverley Hills

He enjoyed a sun-soaked holiday in Palm Beach last week.

And Sir Rod Stewart, 71, continued to take time away from his busy schedule as he headed to Starbucks in Beverly Hills on Friday.

The Maggie May hitmaker was joined by two of his children, Kimberley, 38, and Sean, 37, and Kiss musician Paul Stanley for the family lunch.

Dressed in burgundy chinos, a cream knitted jumper and blacked-out shades, the singer arrived in style in a plush Ferrari.

Sir Rod parked the enviable car before heading to Starbucks with son Sean.

However, the 72-year-old looked unimpressed with his daughter Kimberley, as she chatted away on her phone during the catch-up. Last week the singer suffered an awkward prank while he filmed a video for a charity art project.

Clad in head-to-toe white, Rod appeared oblivious to his looming plight as he talked to camera, before the person filming plunged him into the pool.

The rocker was seen spluttering and swearing as he rose to the surface, much to the amusement of viewers once the video was uploaded.

Rock star Sir Rod Stewart needs to find a new Christmas present for his son as NEWTS have put the brakes on plans to build him a posh swimming pool.

Plymouth-based architects have been working closely with the rocker on plans for the swanky pool, but have been held up after newts were found in the gardens of his mansion.

Burke Rickhards, the North Hill-based firm, were due to complete the large swimming pool project for Sir Rod in early 2018 at his Grade II listed mansion in Essex, the Plymouth Herald reports.

Sir Rod had originally wanted to have the pool built as his son's Christmas present, due to the 11-year-old being a competitive swimmer.But the discovery of the newts, which are a protected species - meant the project was pushed back.

It is illegal to catch or handle the newts from their habitat or cause them harm in anyway.

The artists has had to obtain a license before work can begin.

Detailed plans have been created which reveal what the mega-star’s new pool and garden will look like.

While I'm on holiday and couldn't be with Roger Daltrey & @alistairmorrisonphotography at @theadorationtrilogy unveiling tonight, I was sure to make a splash. ?

Sir Rod seemed blissfully unaware as the joker walked towards him before the singer was sent flying into the water.

This is the hilarious moment rocker Rod Stewart was shoved into a swimming pool.

The music icon was in the middle of recording a video for a charity art project when his performance was suddenly cut short.

Sir Rod seemed blissfully unaware as the person holding the camera walked towards him, before the singer was sent backwards and into the water.

The woman responsible for the prank couldn't stop herself from laughing, while - in true Sir Rod fashion - the Da Ya Think I'm Sexy star let out a quick F word as he plunged below the surface.

Rod was filming a message for Roger Daltrey and Alastair Morrison's 'legendary musician' exhibit at the Victoria and Albert museum.

The project, which went on show yesterday, supports the Teenage Cancer Trust and Teen Cancer Charities.

The 'Hold Back The River' singer has revealed he's recorded a track with the 72-year-old rock legend which will be released "soon", but says it's more important for him to focus on his own sound at the moment rather than feature on songs with other artists.

Handbags & Gladrags straight from Piccadilly last week! Had a sensational time returning to the streets of London where I got my start for @theadorationtrilogy’s #SearchingforApollo unveiling. The project by Roger Daltrey & @alistairmorrisonphotography features over 60 legends pictured as street performers and supports Teenage Cancer Trust and Teen Cancer America.

He started out as a busker in the Sixties, learning his trade inside London's famous Denmark Street guitar shops.

And Rod Stewart went back to his roots on Monday, playing an impromptu gig in Piccadilly Circus - less than half a mile from his old musical haunts.

Delighting stunned onlookers, Rod 'The Mod' busted out his best moves while singing a version of Handbags and Gladrags, alongside a fellow busker Henry Facey.

Dressed in typically debonair fashion, the crooner rolled back the years in front of one of London's most famous landmarks.

Embracing the chilly autumnal weather, the star wrapped up with a simple black scarf tucked beneath a showstopping tartan pea coat. The proud Scotsman wore his colours proudly on the tartan coat, cut sleekly, with three buttons and minimal lapels.

Music-legend Rod has been in benevolent form of late, recently winning plaudits for his generous donation to a small, domestic abuse charity. 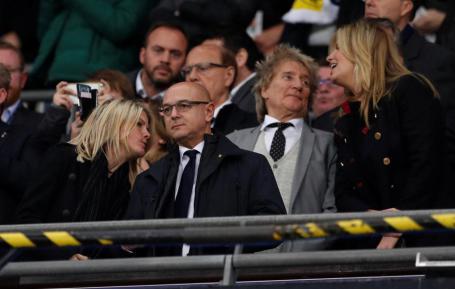 Rod Stewart will return to Las Vegas in June 2018 to resume his ongoing, acclaimed residency “Rod Stewart: The Hits” at The Colosseum at Caesars Palace. Tickets for six new shows June 12 – 23, 2018will go on sale to the public Saturday, Nov. 4 at noon PT.

This marks Rod’s eighth year of the residency at The Colosseum. Since its premiere in 2011, “Rod Stewart: The Hits.” has been experienced by over a half million fans and continues to be a must-see show on the Las Vegas Strip, delivering chart-topping hits spanning Stewart’s over five-decade career including “You Wear It Well,” “Maggie May,” “Da Ya Think I’m Sexy,” “The First Cut is the Deepest,” “Tonight’s The Night” and “Hot Legs”.

Tickets for the new shows will go on sale to the general public beginning Saturday, Nov. 4 at noon PT.