Rod Stewart has revealed that he 'stole' the words and melody for his song Da Ya Think I'm Sexy from a similar track he heard at Rio carnival.

The singer, 77, made the admission as he chatted about plagiarism and song writing on Apple Music's Deep Hidden Meaning Radio with Nile Rodgers.

'Full speed ahead for the tour!' Rod Stewart, 77, reveals he's back to 'top fitness' after undergoing a knee replacement and ankle surgery

Sir Rod Stewart showed that he's in fighting fit shape following his knee replacement and ankle surgery, as he ran back and fourth during a bleep test.

The 77-year-old posted a video to Instagram on Monday as he ran laps across a football pitch - revealing to fans that he is at 'top fitness'.

The rocker went under the knife in 2020, after sustaining injury's from playing football - opting for an ankle surgery which reportedly cost £8,000.

And despite vowing his 'football days are over' back in 2021, the singer seemed to be at full capacity as he put on an age defying display.

tosdnop3lalr22578t :a A 4p2i6t12
A big thank you to Rod for popping into his favourite Irish bar again. Also, a big thank you to all of our regular customers for making Murphy’s Irish Bar a success.
We look forward to welcoming Rod and every one of you back in the near future.
“Have we told you lately, that we love you?” 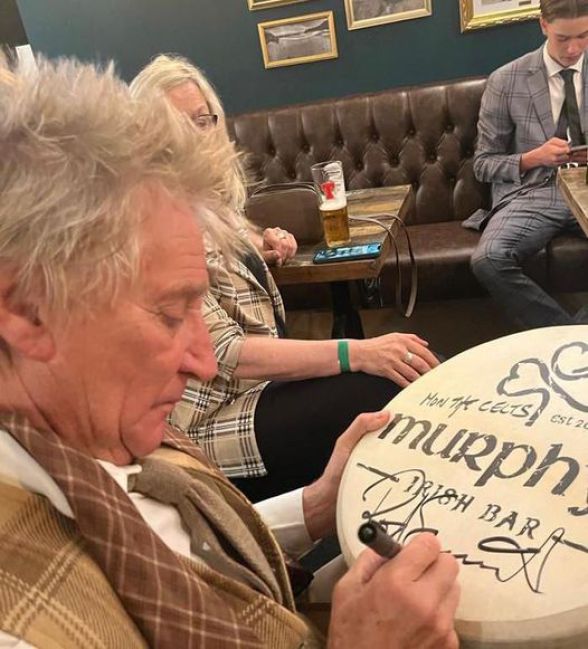 A big thank you to Rod Stewart and John Terry for popping into their favourite Irish bar to celebrate Celtic winning the league.
Here’s a snippet of the Bhoys chanting.
We told Rod he should sing for a living.
We told John Terry to stick to football

'Love is in the air': Sir Rod Stewart, 77, and Penny Lancaster, 51, put on a smitten display as they wrap their arms around each other in snaps taken on sun-soaked getaway to France

Sir Rod Stewart and Penny Lancaster appeared to be as loved-up as ever as they posed for snaps on their sun-soaked getaway to France.

The musician, 77, and his model wife, 51, put on a smitten display as they cuddled up to each other and enjoyed an evening out at Annex Beach in Cannes on Monday.

Rod was seen lovingly putting an arm around Penny as they went for a stroll, with the rocker sporting his beloved Celtic FC colours. And Sir Rod Stewart made sure he got the best seats in the house as he cheered on his beloved team from a VIP box at Hampden Park on Sunday. 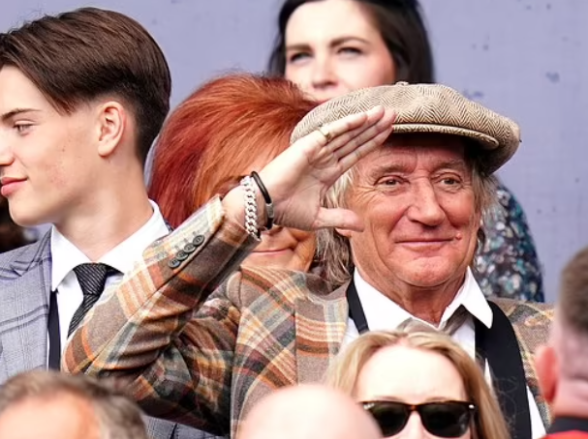 The singer looked chirpy while greeting a friend as a lanyard badge hung from his neck, emphasizing his VIP status on the day. 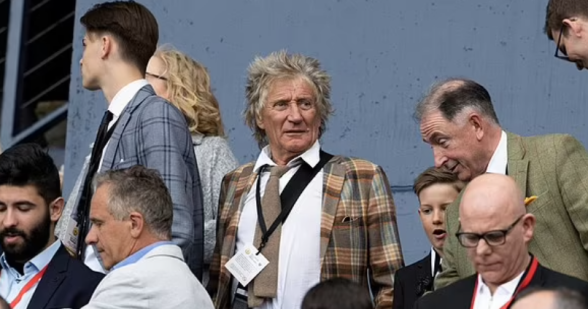 Sir Rod Stewart and wife Penny Lancaster were in good spirits as they enjoyed a night out at Oswald’s in London’s Mayfair on Wednesday night, sharing a kiss before dashing off home in their car.

The musician, 77,  and his model partner, 51, were all smiles as they left the venue, with Sir Rod wearing cream coat over a crisp white shirt which he wore unbuttoned at the collar and a tie which hung loosely around his neck.

He completed his look with a pair of grey trousers and some worn white and grey shoes as he walked close behind Penny.

Loved-up: Sir Rod Stewart, 77, and wife Penny Lancaster, 51, were in good spirits as they stepped out to Oswald’s in London on Wednesday, kissing before dashing off home in their car

Penny looked stylish in an animal print blouse while she wore a chic black trouser suit.

She carried a matching black handbag with her and accessorised with a pair of gold hoop earrings.

The volunteer policewoman went for a simple look with her make-up, showing off her natural beauty.