INTERVIEW WITH BARON RAYMONDE FOR THE RFSC 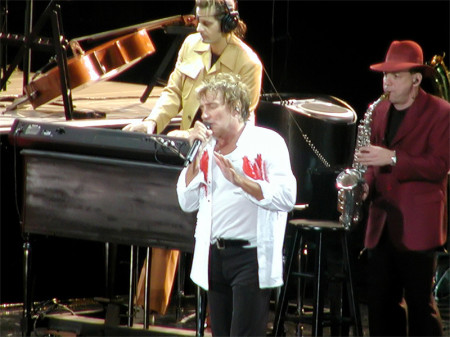 RSFC    Are there any other musicians in the family?

My mother was an opera singer

RSFC    What is your favourite pastime (when you are not working)?

RSFC   You started playing music from an early age, who were the biggest musical influences on your life?

RSFC  Which current bands do you like at the moment?

RSFC  What made you decide to start playing the sax?

Best friend signed up for band in school.

RSFC    Where did you learn?

In school. Went to Music School at the University of North Texas. Received by BM and MM there. Studied with many teachers Took some sax lessons from George Young and Eddie Daniels.

RSFC  Any special memories from this time in your life?

Eddie Daniels took me to 2 recordings sessions with him . One was for the movie"Fame" he played flute with Hubert Laws and Julius Baker. The other one was a jingle at A & R recording in NYC.

RSFC  Having played alongside many musicians throughout your career do you have any special moments that stand out from others?

Well I tell you one moment with Rod. We were in Montreal at the Molson Center at the crowd was going wild and Rod looked back at me and said" it doesn't get any better then this". Playing sax with The Blues Brothers Band was exiting. They have a great horn section. Lou Marini from the Blues Brothers has a band called the Nuff Brothers and their all top studio musicians in NYC.I love playing with them.

RSFC  How and when did you get involved with Rods tour and how did you feel when asked to do it?

My friend Chuck Kentis called me and said Rod needed a horn section at benefit in NYC. I was in Dallas playing with GE Smith(former band leader of SNL).I made some calls and told his manager I was all set with a horn section. When I called back, they said the venue was to small to have a horn section but could I play on one song.I said OK. I went to rehearsal for the benefit and when I got there they asked me to learn more music. Rod wasn't there that day. I said OK.They recorded the rehearsal. The next day when I came into rehearsal some of his staff said they really enjoyed my playing.When Rod got to rehearsal they asked me to play a ballad with Brandy(one of the performers at the benefit)After we played the song. Rod listened to it back and said"I want you to play with me" I didn't think anything of it. I was told he was looking for Blonde female sax player to replace Jimmy. After rehearsal they asked me to meet to play the solo on "Tonight's The Night" on the Rosie O'Donnell show. So I did. Rod was thumbs up. That night we played at the benefit Rod came over afterwards and said you sounded great I told him he sounded great.Later that week after the Rosie Show aired I called his manager to thank them. She said I was great and asked me how much money I would want to tour. I was really busy in NYC but thought it would be a good opportunity. So I said I would go.

RSFC  How did you prepare for the tour?

I listened and learned all of Rod's Music.

RSFC  Could you tell me a bit about what life is like in the dressing rooms and being on the road for so long?

Back in the day I used to like the fringe benefits of having alcohol in the dressing room. Now I don't drink so that doesn't appeal to me. Usually we joke around and try to loosen up for the gig.

RSFC  Did you travel with the rest of the band?

I found the fans were more reactive in Canada then in the US.That has been true for me with other artists too. I remember in Montreal fans throwing themselves at the bus . They thought Rod might have been in the bus.

RSFC  Did you have any favourite venues and which was the one that you will remember most?

I like the Ice Castles arena in Tampa. I remember people chanting my name after a solo on "Downtown Train".

RSFC  While on tour did you feel like you played a major part on stage or just part of the backing band?

After the first concert Rod put me right near him. I had 8 solos a night on 6 different instruments. I guess that's major.

RSFC  Who was on contract to provide food and drinks etc while you were touring?

Can't remember but they were very good.

RSFC   You followed Jimmy Roberts; who was Rod's sax player for 15 years - was it difficult to follow in his footsteps?

A couple of people gave me some suggestions and I took them. I try to keep and open mind. You can always learn something. I respected Jimmy for what he did but I had been playing my whole live. So I just tried to be myself and Rod seemed to like that.I love music and hopefully that comes across to the audience.

RSFC  It's been 5 years since your time on tour with Rod - what have you been doing since? And what are you doing now?

I've done a lot . After Rod I played 2 TV show specials with GE Smith.The MarkTwain Prize and A Bravo special "Broadway's Best. I also played sax on the show "Love Janis" at the Village Theatre in NYC. It was great show about Janis Joplin and the band played on stage. A matter a fact I had auditioned for the show right before getting ask to do Rod's tour and had to turn the show down. When I got off tour with Rod they asked me to play the show again. It was tough time in NYC. 9/11 just happened.I just finished working on a CD with Southside Johhny and Labamba's Big Band.(Labamba's the trombonist on the Connan O'Brien show)It's all Tom Waits music. Tom Waits sings a Duet with Southside Johnny on the CD. Last month I played some shows with Percy Sledge and I have my own Band now.People call me to do jingles and I freelance around NYC.I have been teaching a lot the last 5 years too.So I have a nice balance in my life.

RSFC  Was it disappointing not to play with Rod after the USA 2001 tour or was it a short term agreement?

Yes I was disappointed. I gave up what I was doing in NYC to go on Tour. Though after 9/11 I was happy to be home then on the road. It turned out to be blessing.

RSFC  What do you personally think of Rods voice and if asked would you tour with him again?

Rod has one of the great Rock and Pop voice of all time.I love his voice. Rod's great and it was great to perform with such a legend but no, I would not go on tour, I got too many things going on and would have to give up a lot to go on tour with him.There's too high of a price to pay for going on the road. It was fun in my Twenties and Thirties. I would still play with Rod if he asked me to do a short stint with him ,but that's about it

RSFC  What are your plans for the future?

I make plans and the man upstairs usually laughs but I would like to work some more of my own music and keep playing with great musicians and teach and give back.

Finally, I have most graciously thanked Baron for taking the time to answer my e-mails and for allowing me to share this interview with everyone at RSC, and I've promised to buy him a cup of coffee if he ever comes to Scotland, which I am sure you will agree he surely deserves. Helen ( Purple Heather )